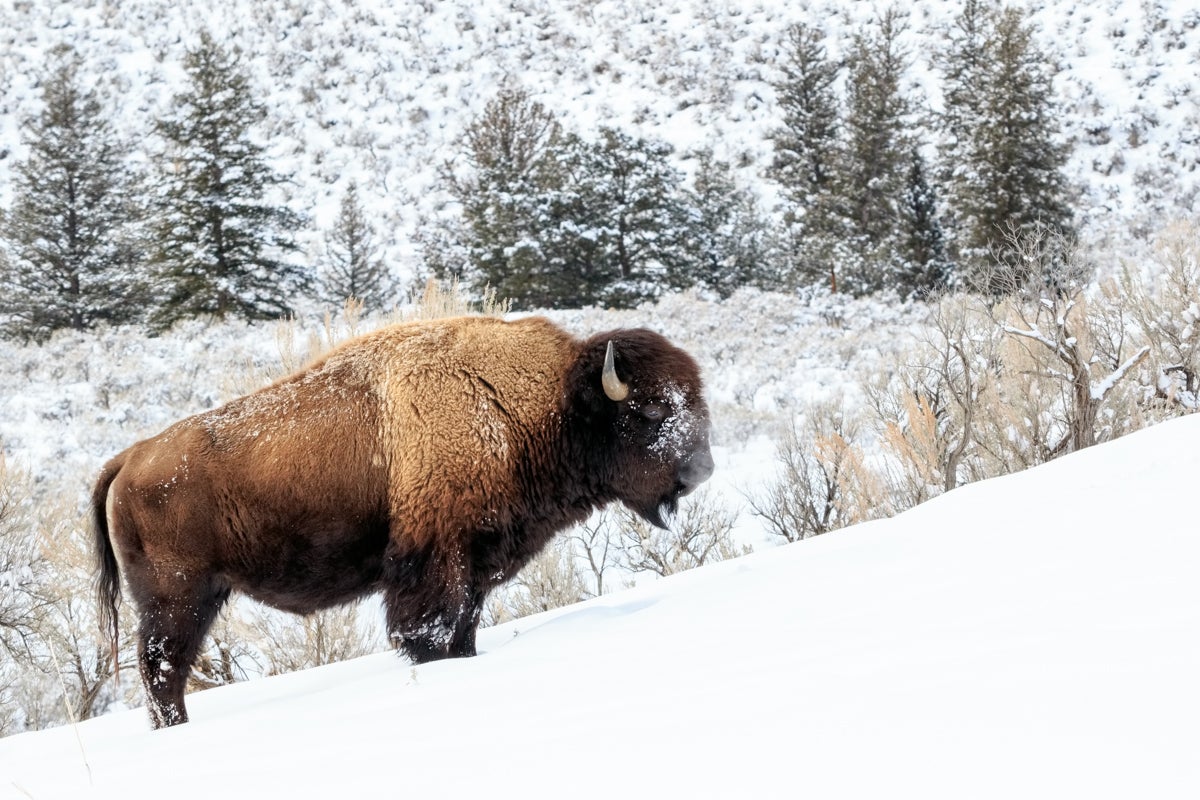 Three wildlife groups sued the federal government Tuesday, asking for the Yellowstone bison to be listed as a threatened or endangered species in order to protect the iconic animals from hunting and prescribed culling. Currently, park officials manage the population to about 4,000 animals using these methods. The population now numbers about 4,500.

Some 60 million bison, also known as buffalo, once roamed the prairies and grasslands of North America. They provided food, clothing and sustenance to Native Americans. In the 1800s, European settlers began hunting the animals and the U.S. Army undertook a deliberate program of extermination as a way to starve the Native peoples who depended on them. They nearly drove the bison to extinction.

By the time Yellowstone National Park was created in 1872, there were only about two dozen bison in the area. The Army was then told to protect this herd. They also brought 21 bison from two private herds to Yellowstone in 1902 to create a larger breeding population. Today’s herds in Yellowstone—the only place where wild bison have lived continuously since prehistoric times—descended from these few animals.

The majestic 2,000-pound bison is an iconic symbol of the American West. On May 9, it became our official national mammal when President Obama signed the National Bison Legacy Act into law. It is a creature beloved by visitors to Yellowstone National Park—sometimes too much—but outside park boundaries, ranchers aren’t fans.

Their concern is a disease called brucellosis. It can be transmitted among bison, elk and cattle, and it can cause pregnant females to abort their calves. But it isn’t the bison’s fault: the non-native bacteria was introduced by cattle brought to the West by early pioneers. Brucellosis was first discovered in Yellowstone bison in 1917. It’s thought they likely contracted the disease from domestic cattle, and today about half the bison herd tests positive for brucellosis.

Most visitors encounter bison standing, sitting, walking slowly or occasionally running. But they are migratory animals and move in and out of the park with ease. In winter, many move north and west into Montana. They have almost no predators, except humans, as wolves find elk easier prey. Bison are listed as near threatened by the International Union for Conservation of Nature (IUCN), and may be hunted outside the park.

In 2000, the federal government and the state of Montana established the Interagency Bison Management Plan (IBMP). Its goals are to maintain the wild bison population within the national park, manage bison that leave the park and protect domestic cattle from brucellosis. In practice, the park looks to limit the bison herd to about 4,000 animals, which it considers a sustainable number.

To bring those numbers down, the National Park Service uses two methods: legal hunts outside the park and capturing animals near the park boundary. Captured bison are transferred to a number of nearby Native American tribes for immediate slaughter. But wildlife activists aren’t happy about these actions.

Department of Interior should base its decisions on the best available science, not political pressure from the livestock industry.”

Joining the lawsuit along with Buffalo Field Campaign are Western Watersheds Project and Friends of Animals.

The National Park Service hails the IBMP as a success. In its Yellowstone Resources and Issues Handbook 2015, it states:

“To date, no documented transmission of brucellosis from Yellowstone bison to cattle has occurred, due in part to successful efforts by the agencies to maintain separation between them. Conversely, numerous transmissions from elk to cattle have occurred since 2000.”

Nevertheless, the park service acknowledges that the issues are complex and that it’s time for a new plan.

“New data about general biology and disease prevalence are available, and public opinion is shifting toward more tolerance for bison in Montana,” the handbook states.

The organizations that have filed the lawsuit aren’t waiting. They contend that restricting the bison’s habitat to the boundaries of the national park reduces the herd’s genetic diversity and places them at risk of extinction.

“There were millions and millions of acres that were available to the bison that are no longer available to them because of cattle and sheep ranching,” said Michael Harris, director of Friends of Animals’ Wildlife Law Program. “Their range has been curtailed by 90 percent, and that alone should be enough to warrant a listing.”

Today, about 20,000 wild bison roam the U.S. and Canada, with the largest population—numbering 10,000—in Wood Buffalo National Park in Alberta. Another 162,000 are on private farms and ranches. All of the bison meat sold in stores and restaurants come from these farmed animals.

Yellowstone National Park will see more than 4 million visitors this year, and those visitors all want to see bison in their natural habitat. The restoration of bison to Yellowstone has been one of America’s great conservation success stories, and the groups that filed the lawsuit want to keep it that way.