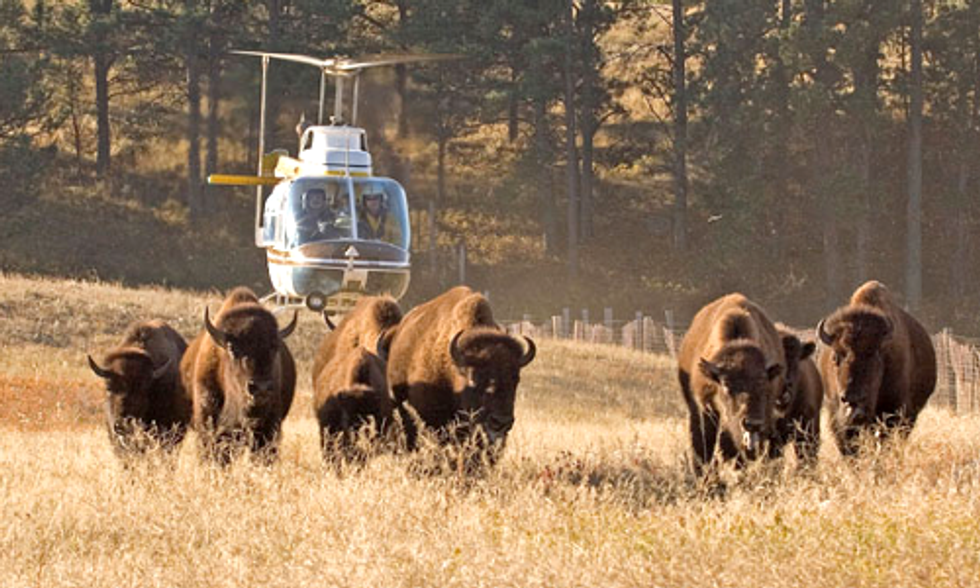 Yellowstone National Park shipped 20 of America’s last wild bison to slaughter yesterday morning. Twenty-five bison were captured Friday in the Stephens Creek bison trap, located inside the world’s first national park. After being confined in the trap for five days, 20 of the bison were handed over to the Confederated Salish and Kootenai Tribes, who are required to slaughter them under a controversial agreement between the tribes and the Park. Five bison remain locked in the trap as of Wednesday afternoon.

Yellowstone plans to slaughter between 600 and 800 bison this winter, according to park spokesman Al Nash. “We’re going to seek opportunities to capture any animals that move outside the park’s boundaries,” he said. Yellowstone has set a “population target,” or objective, of 3,000 to 3,500 animals.

According to Dan Brister, Executive Director of Buffalo Field Campaign (BFC), “This number was politically derived to limit the range of wild buffalo and has no scientific basis. It does not reflect the carrying capacity of the buffalo’s habitat in and around Yellowstone National Park.”

This is the first time Yellowstone has turned bison over to the tribes under the slaughter agreements. According to James Holt, a Nez Perce Tribal Member and a member of BFC’s board, “It is disheartening to see tribes support these activities.”

“Buffalo were made free, and should remain so,” Holt said. "It is painful to watch these tribal entities take such an approach to what should be the strongest advocacy and voice of protection."

"It is one thing to treat their own fenced herds in this manner, it is quite another to push that philosophy onto the last free-roaming herd in existence," Holt continued. "Slaughter Agreements are not the answer.”

Brucellosis is the reason used by Yellowstone to justify the slaughter of wild bison. There has never been a documented case of wild bison transmitting the livestock disease to cattle. Other wildlife, such as elk, also carry brucellosis and are known to have transmitted it, yet they are free to migrate, and even commingle with cattle with no consequence.

The wild bison of the Yellowstone region are America’s last continuously wild population. Like other migratory wildlife, bison cross Yellowstone’s ecologically insignificant boundaries in order to access the habitat they need for survival. During 2007-2008 more than 1,300 wild bison were captured in Yellowstone National Park and shipped to slaughter.

Nearly 7,200 wild bison have been eliminated from America’s last wild population since 1985. Bison once spanned the North American continent, but today, fewer than 4,400 wild bison exist, confined to the man-made boundaries of Yellowstone National Park and consequently are ecologically extinct throughout their native range.