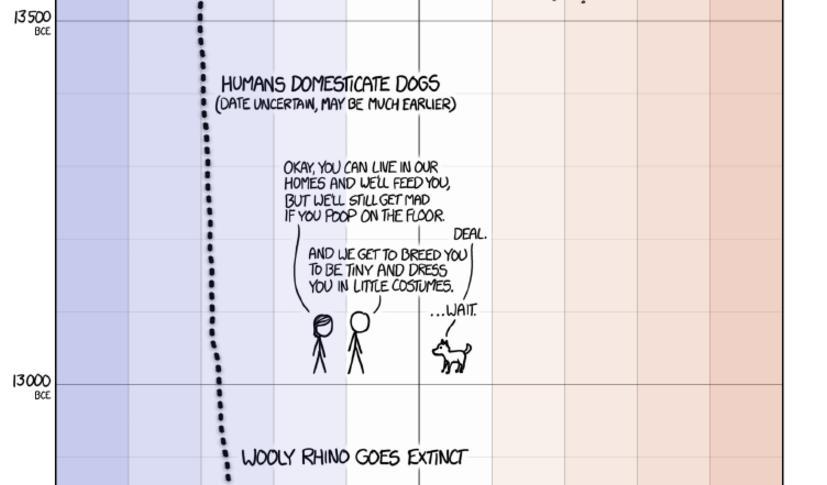 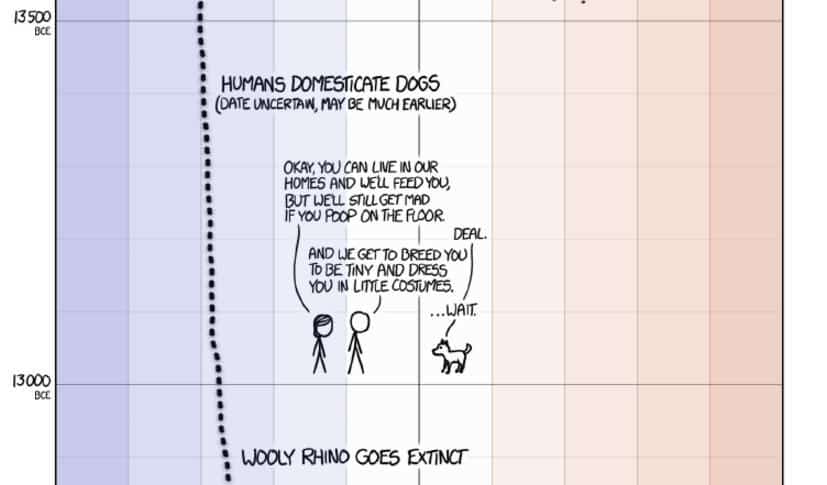 “A Timeline Of Earth’s Average Temperature” is going viral xkcd

Munroe is your classic, multi-hyphenate wonder—a cartoonist-physicist-former NASA roboticist. He’s also incredibly self-deprecating, as he writes on his
about page:

I’m just this guy, you know? I’m a CNU graduate with a degree in physics. Before starting xkcd, I worked on robots at NASA’s Langley Research Center in Virginia. As of June 2007 I live in Massachusetts. In my spare time I climb things, open strange doors, and go to goth clubs dressed as a frat guy so I can stand around and look terribly uncomfortable. At frat parties I do the same thing, but the other way around.

Munroe has expertly tackled climate change in a
previous comic. His latest illustration covers a huge swath of time from the last Ice Age in 20,000 BCE to current day and beyond. As Munroe writes, the comic shows what it means when people say, “the climate has changed before.”

The drawings and captions depict significant earthly milestones, from humanity’s spread across the continents to the extinction of the saber tooth tiger. A number of historical figures also make appearances, such as Gilgamesh, Buddha, Shakespeare and even the last North American Pokémon (“that is not a real fact”). All the while, the temperature accelerates from cool-blue on the left side to red-hot,
record-breaking heat on the right.

For those of us who believe in climate change, the post has some great chuckles along the way as you scroll down the strip, like the mention of 300 BCE that’s like the movie “but regular speed and with more clothing.” But once you hit the ominous temperature curve at the bottom, it’s a sobering reminder that we all must act soon before carbon emissions hit the
point of no return.

The post is going viral on social media with a number of high-profile Twitter users lauding the comic. Tesla CEO Elon Musk
tweeted about it on Tuesday morning.

It’s a fitting tweet from Musk. The clean energy advocate
once said we must “fight the propaganda of the fossil fuel industry which is unrelenting and enormous.”

Author, Vlogbrother and Nerdfighter, John Green,
called the comic “brilliant.” Fun fact, the
Fault in Our Stars writer once interviewed President Barack Obama about climate change and the most efficient way to reduce carbon emissions.

Gamer and internet icon Felicia Day also had
similar words for the illustration.

This is so brilliant as xkcd always is: Earth Temperature Timeline https://t.co/HpFbglVTU9

Politicians are also getting into the mix. Here’s a tweet from Denis Richard McDonough, the current White House chief of staff.

Want to understand why we need to act on climate? xkcd puts in perspective the recent rise in average temperature: https://t.co/sM0B96uYc0

Finally, here’s a
tweet from Dr. Katherine (Katie) Mack, an astrophysicist based at the University of Melbourne, Australia, who was dubbed a “science shero” by
Women in the World last month after being trolled and expertly responding to a climate-change denier on Twitter. Maybe she can use this comic next time to hit back at climate deniers.

"Climate has changed before."

Take some time to scroll through this amazing xkcd timeline: https://t.co/QmUtwU1PzE pic.twitter.com/WEX56FdDWX

See the full comic here or below.