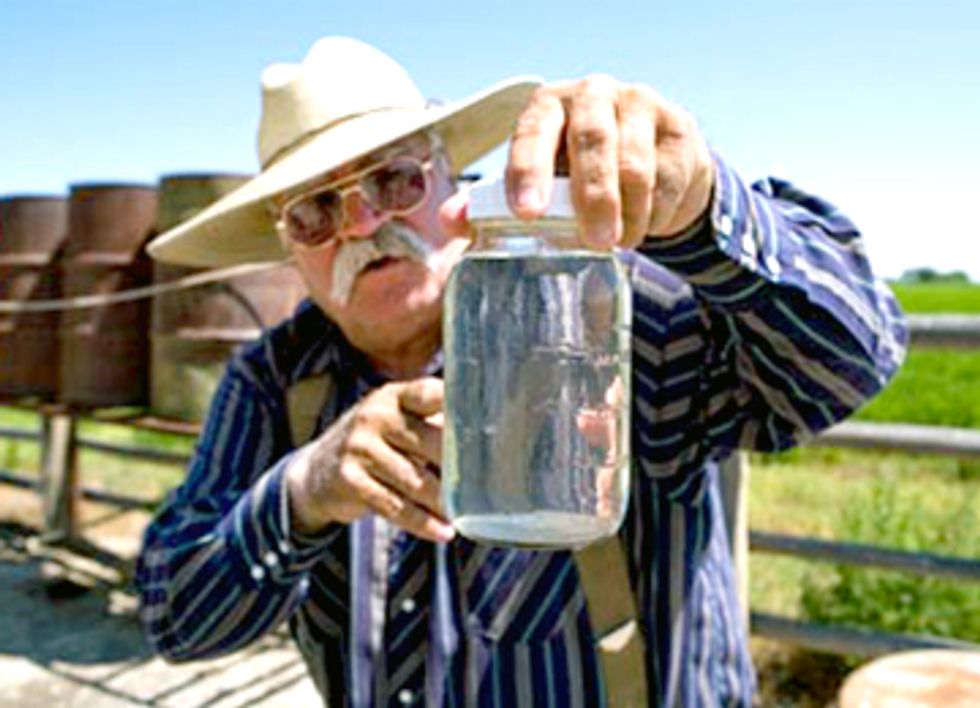 Pavillion-area citizens, landowners and environmental groups today condemned Gov. Mead’s (R-WY) announcement that the state is assuming control from the U.S. Environmental Protection Agency (EPA) of the investigation into groundwater contamination by fracking-enabled oil and gas development near Pavillion, WY.

In the announcement, the Governor congratulated EPA and Encana—the company operating in the Pavillion area—for working with him to “chart a positive course” for the investigation.

“We went to the EPA for help after the State of Wyoming and Encana refused to address the public health impacts of unbridled development in the Pavillion area," said Pavillion farmer John Fenton. "Now Encana has bought its way back in and is working with the state on a strategy to cover up the mess they’ve created."

"Our government’s priority is clearly to protect industry rather than Wyoming citizens, our health and our property values. Gov. Mead, the Obama administration and Encana have decided what is best for our community without consulting us,” Fenton continued. “We were presented with Mead’s vague plan at the same time it was released to the public. Unlike the other stakeholders, we bear the brunt of living in the toxic mess that has become our community, but our input has been thrown out with EPA’s investigation. This is a sad day for our country.”

“It seems clear that the White House’s 'all of the above' energy policy means fracking’s impacts on communities are being ignored,” said Earthworks' energy program director Bruce Baizel. “All across the country, whether it’s Wyoming, or Texas or Pennsylvania, it appears the EPA is being politically pressured to back off sound science that shows fracking-enabled oil and gas development is a risk to public health. With these decisions, the Obama administration is creating more opposition to fracking, not less.”

“Gov. Mead said earlier this week that change should be driven by elected officials and agencies, not the people,” said Don Nelson, a farmer and rancher near Keene in western North Dakota, on behalf of the Western Organization of Resource Councils.

“This attitude is exactly why those of us who have to live with drilling and fracking have so little confidence in our regulatory agencies and elected officials. They only listen to the oil and gas industry, not to the local people. The same is true in North Dakota. And now EPA is backing down too and another investigation into groundwater contamination from oil and gas development is being swept under the rug. Why would anyone believe the oil and gas industry or the state regulatory agencies when they say drilling and fracking are safe?”

“The state of Wyoming is already on record, through action and inaction, as denying that Pavillion’s groundwater contamination is a cause for concern,” said area ag-producer Jeff Locker. “They are throwing out a conscientious science based study by EPA that cost the taxpayers millions of dollars. The Governor’s plan postpones any conclusions for at least another year. It’s hard to believe that they’re trying to get to the bottom of the problem, they’re hoping this whole thing just goes away.”