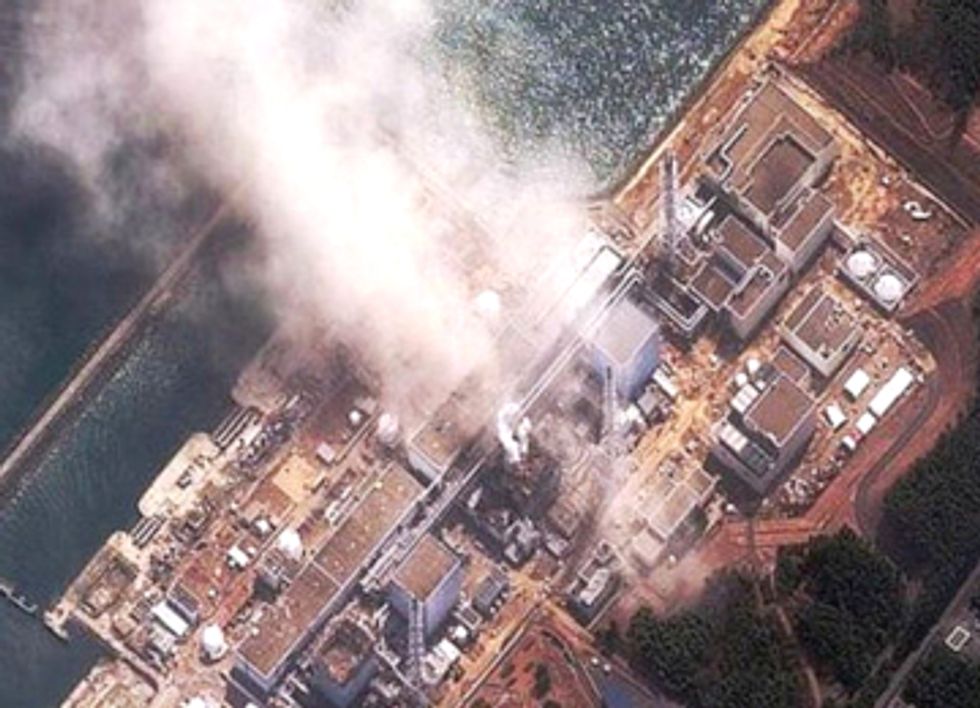 More than 48,000 global citizens have now signed a petition at NukeFree.org asking the United Nations and the world community to take charge of the stricken Fukushima nuclear plant. Another 35,000 have signed at RootsAction. An independent advisory group of scientists and engineers is also in formation.

The signatures are pouring in from all over the world. By November, they will be delivered to the United Nations.

The corporate media has blacked out meaningful coverage of the most critical threat to global health and safety in decades.

The much-hyped “nuclear renaissance” has turned into a global rout. In the face of massive grassroots opposition and the falling price of renewable energy and natural gas, operating reactors are shutting and proposed new ones are being cancelled.

This lessens the radioactive burden on the planet. But it makes the aging reactor fleet ever more dangerous. A crumbling industry with diminished resources and a disappearing workforce cannot safely caretake the decrepit, deteriorating 400-odd commercial reactors still licensed to operate worldwide.

All of which pales before the crisis at Fukushima. Since the March 11, 2011 earthquake and tsunami, the six-reactor Daichi site has plunged into lethal chaos.

For decades the atomic industry claimed vehemently that a commercial reactor could not explode. When Chernobyl blew, it blamed “inferior” Soviet technology.

But Fukushima’s designs are from General Electric—some two dozen similar reactors are licensed in the U.S. At least four explosions have rocked the site. One might have involved nuclear fission. Three cores have melted into the ground. Massive quantities of water have been poured where the owner, Tokyo Electric (Tepco), and the Japanese government think they might be, but nobody knows for sure.

As the Free Press has reported, steam emissions indicate one or more may still be hot. Contaminated water is leaking from hastily-constructed tanks. Room for more is running out. The inevitable next earthquake could rupture them all and send untold quantities of poisons pouring into the ocean.

The worst immediate threat at Fukushima lies in the spent fuel pool at Unit Four. That reactor had been shut for routine maintenance when the earthquake and tsunami hit. The 400-ton core, with more than 1300 fuel rods, sat in its pool 100 feet in the air.

Spent fuel rods are the most lethal items our species has ever created. A human standing within a few feet of one would die in a matter of minutes. With more than 11,000 scattered around the Daichi site, radiation levels could rise high enough to force the evacuation of all workers and immobilize much vital electronic equipment.

Spent fuel rods must be kept cool at all times. If exposed to air, their zirconium alloy cladding will ignite, the rods will burn and huge quantities of radiation will be emitted. Should the rods touch each other, or should they crumble into a big enough pile, an explosion is possible. By some estimates there’s enough radioactivity embodied in the rods to create a fallout cloud 15,000 times greater than the one from the Hiroshima bombing.

The rods perched in the Unit 4 pool are in an extremely dangerous position. The building is tipping and sinking into the sodden ground. The fuel pool itself may have deteriorated. The rods are embrittled and prone to crumbling. Just 50 meters from the base is a common spent fuel pool containing some 6,000 fuel rods that could be seriously compromised should it lose coolant. Overall there are some 11,000 spent rods scattered around the Fukushima Daichi site.

Dangerous as the process might be, the rods in the Unit Four fuel pool must come down in an orderly fashion. Another earthquake could easily cause the building to crumble and collapse. Should those rods crash to the ground and be left uncooled, the consequences would be catastrophic.

Tepco has said it will begin trying to remove the rods from that pool in November. The petitions circulating through NukeFree.org and MoveOn.org, as well as at RootsAction.org and avaaz.org, ask that the United Nations take over. They ask the world scientific and engineering communities to step in. The Rootsaction petition also asks that $8.3 billion slated in loan guarantees for a new U.S. nuke be shifted instead to dealing with the Fukushima site.

It’s a call with mixed blessings. The UN’s International Atomic Energy Agency (IAEA) is notoriously pro-nuclear, charged with promoting atomic power as well as regulating it. Critics have found the IAEA to be secretive and unresponsive.

But Tepco is a private utility with limited resources. The Japanese government has an obvious stake in downplaying Fukushima’s dangers. These were the two entities that approved and built these reactors.

While the IAEA is imperfect, its resources are more substantial and its stake at Fukushima somewhat less direct. An ad hoc global network of scientists and engineers would be intellectually ideal, but would lack the resources for direct intervention.

Ultimately the petitions call for a combination of the two.

It’s also hoped the petitions will arouse the global media. The moving of the fuel rods from Unit Four must be televised. We need to see what’s happening as it happens. Only this kind of coverage can allow global experts to analyze and advise as needed.

Let’s all hope that this operation proves successful, that the site be neutralized and the massive leaks of radioactive water and gasses be somehow stopped.

As former Ambassador Mitsuhei Murata has put it: full-scale releases from Fukushima “would destroy the world environment and our civilization. This is not rocket science, nor does it connect to the pugilistic debate over nuclear power plants. This is an issue of human survival.”