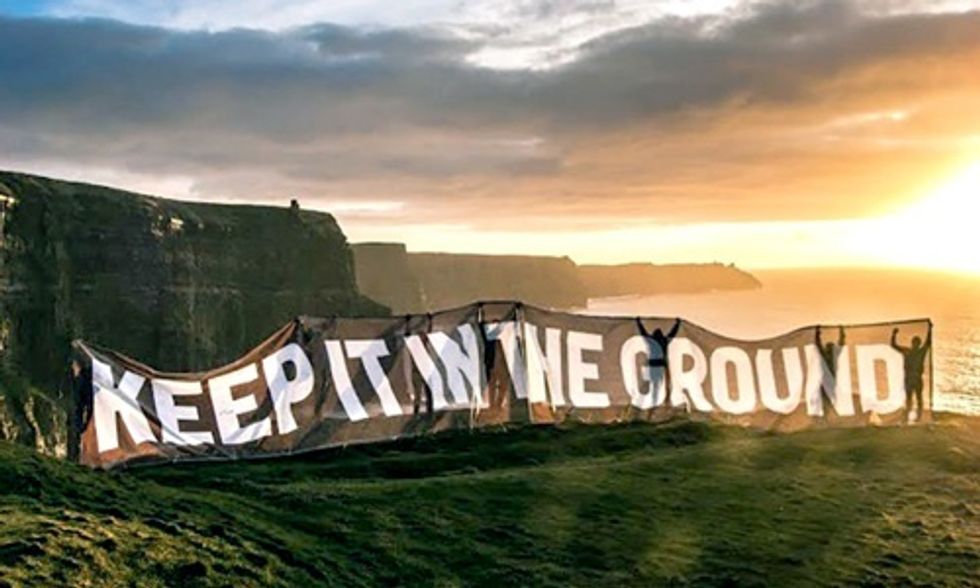 Just days after scientists named 2015 the hottest year on record, top environmental groups Greenpeace, Sierra Club and 350.org have released a new report, Keep It In the Ground, identifying the top climate threats facing the planet. The report examines the fossil fuel reserves around the world that, if developed, would push the globe past 1.5C and then 2C of warming, the threshold beyond which the effects of climate change would make the Earth unlivable.

To avoid the worst impacts of climate change, we need to keep the world's remaining fossil fuels in the ground. That means moving away from coal, oil and natural gas and towards a renewable energy future. Photo credit: Greenpeace

Fresh off a series of victories in 2015, these groups and others are taking on many of the challenges identified in the Keep It In the Ground report as part of a global push to stand up to the fossil fuel industry and accelerate a just transition to 100 percent renewable energy.

“Climate change is already bringing flood waters and wildfires right to our doorsteps," May Boeve, executive director of 350.org, said. “At this point, continuing to burn fossil fuels is truly lethal. The effort by fossil fuel companies to dig up and burn coal, oil and gas despite the consequences is the biggest threat our planet faces. All around the world people are now mobilizing to keep fossil fuels in the ground."

Keep It in The Ground lays out the carbon risk of fossil fuel deposits in Africa, the Arctic, Australia, Brazil, Canada, China, India, Indonesia, Russia, Saudi Arabia and the U.S., measuring each against a global carbon budget meant to prevent catastrophic climate change. The report also assesses the changing public policies surrounding each fuel source, fossil fuel industry efforts to develop them and citizens' ongoing efforts to keep them in the ground.

“With the historic climate accord set in Paris last year, nearly 200 nations from around the world set an expiration date for fossil fuels," Lena Moffitt, director of Sierra Club's Beyond Dirty Fuels campaign, said. “Now we must rise to the occasion by transitioning to 100 percent clean and renewable energy sources and leave dirty fuels where they belong—in the ground."

According to the report, unless Canada's government implements strong environmental protections, the country's tar sands projects could add an expected 420 million metric tons of CO2 to the atmosphere each year by 2020—more than the entire annual emissions of Saudi Arabia. Tar sands are the fastest growing source of emissions in Canada and the Trudeau government has yet to present a plan to reconcile new tar sands mines and pipelines with international commitments on greenhouse gas reductions. Beyond spewing an additional 700 million metric tons of CO2 into the atmosphere, expanded mining activity in Australia's Queensland region would devastate the Great Barrier Reef, which is already under severe stress from rising temperatures.

"The global climate movement is stronger than ever and we've seen important progress in the effort to keep fossil fuels in the ground, from Arctic oil to Powder River Basin coal," Kelly Mitchell, Greenpeace U.S. climate director, said. “We can't undo the damage that fossil fuel companies have caused already, but we can prevent further harm and build a more just world in the process. Our lives depend on it."