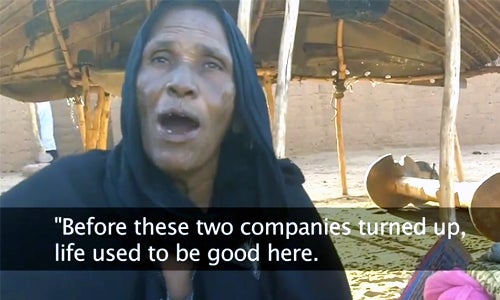 More than 60 percent of Niger’s population lives on less than $1 per day, and even more have no electricity.

Still, French company Areva keeps contaminating those residents and their environment while mining away for uranium—one of the few resources the world’s poorest country still has.

Areva has operated in northern Niger for four decades, according to Keith Slack, the global program manager of Oxfam America’s Extractive Industries team. The French government owns about 80 percent of the company, which provides nearly one-third of the uranium consumed by the nuclear power plants that supply most of France’s energy.

Areva has exported hundreds of millions of dollars worth of uranium from Niger over the years, according to a recent briefing note by Oxfam France and Nigerien group ROTAB. In 2010, Greenpeace conducted an analysis with the France-based Research and Independent Information on Radioactivity Commission (CRIIRAD) that found that the uranium contamination in four out of five water samples exceeded World Health Organization safety limits.

Greenpeace and CRIIRAD also found evidence of radon, a radioactive gas dissolved in water. Despite evidence like the interviews and images from the above video by SciDev.Net, Areva vehemently denies that its actions impact Niger and its residents.

Additionally, the company claims that it gives 85 percent of its uranium profits back to the Nigerien government, despite a report from Oxfam and ROTAB showing that the government really only received about 13 percent.

According to Oxfam, Areva’s two subsidiaries in Niger, Somaïr and Cominak, receive a slew of exemptions from fuel taxes, value-added taxes and more. One provision for the reconstruction of mines allows the company to set aside 20 percent of its profits, which end up being excluded from corporate taxes.

As a result, Oxfam and ROTAB are calling for more transparency, as well as more of a fight from Niger’s government, encouraging its members to push for agreements to be debated in Parliament and for the publishing of Areva’s audits.

“This situation cannot continue,” Ali Idrissa, coordinator of ROTAB, said at a 2013 protest in front of Areva’s offices in Niamey, Niger, according to Reuters.

“France must prove that the time for secret agreements, closed negotiations and pressures is over. African countries should be able to count on fair revenues from French companies extracting their resources.”