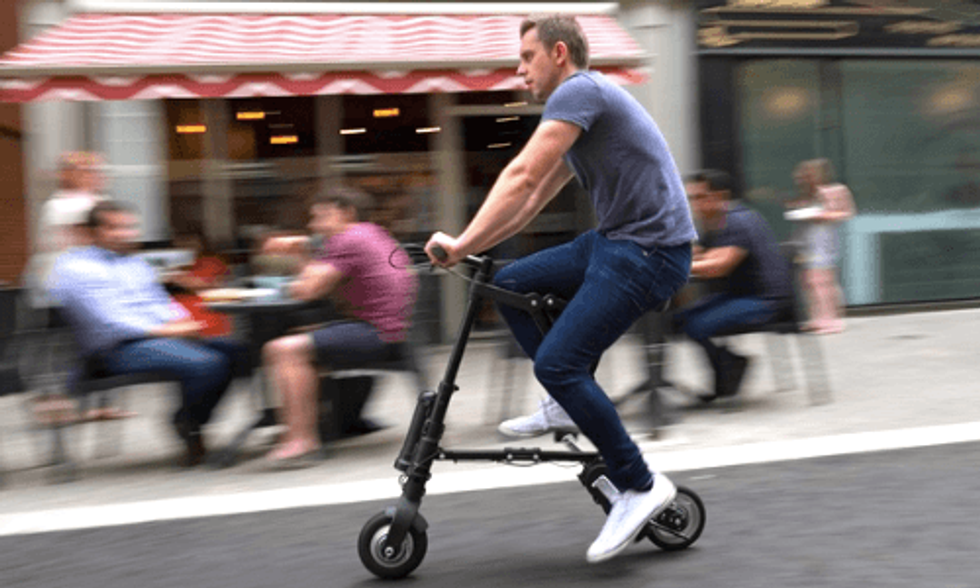 Folding bikes are already incredibly convenient, but throw in a battery and an electric motor, and now it's a bike commuter's dream. At 26 pounds, the A-Bike Electric claims to be the lightest and most compact e-bike in world.

Small but strong. This tiny e-bike has a 15-mile range with a top speed of 12 mph. Photo credit: A-Bike Electric Kickstarter

With its tiny wheels and a battery that's the size of a thermos, the ride is so small it can tuck inside a backpack or under a desk, making it a cinch to take onto a subway, train or car. Parking isn't even an issue when you can easily take it inside of a store or restaurant.

UK inventor Sir Clive Sinclair came up with the original concept of the lightweight, folding A-shaped bike back in 2006. Unlike typical bikes, the A-Bike has a fully enclosed chain system, which means that once it's folded the chain won't get caught onto anything, and your hands or clothes won't get dirty from grime.

"The idea is that if you have a bicycle which is seriously lighter and more compact than anything existing at the moment, it will change the way in which people see bikes," Sinclair said about his invention.

With lazy commuters in mind, this updated version simply adds a motor in the front wheel and a 24V battery. Although it's small and light, the e-bike is made with aircraft grade aluminum and high-strength glass-reinforced polymers. The designers also claim that the bike can fold in 10 seconds.

And if you're wondering about those dinky wheels, they seem to pack more power than one might think. "The dual chain drive has been optimized so that the rate of pedaling matches the rate the wheels turn, this makes riding A-Bike Electric feel like riding any other bike," the designers wrote on their successful Kickstarter page.

The bikes have a projected retail price of $1,089 once it hits stores or you can preorder it on Kickstarter. Check out their campaign video below to see the bike in action.