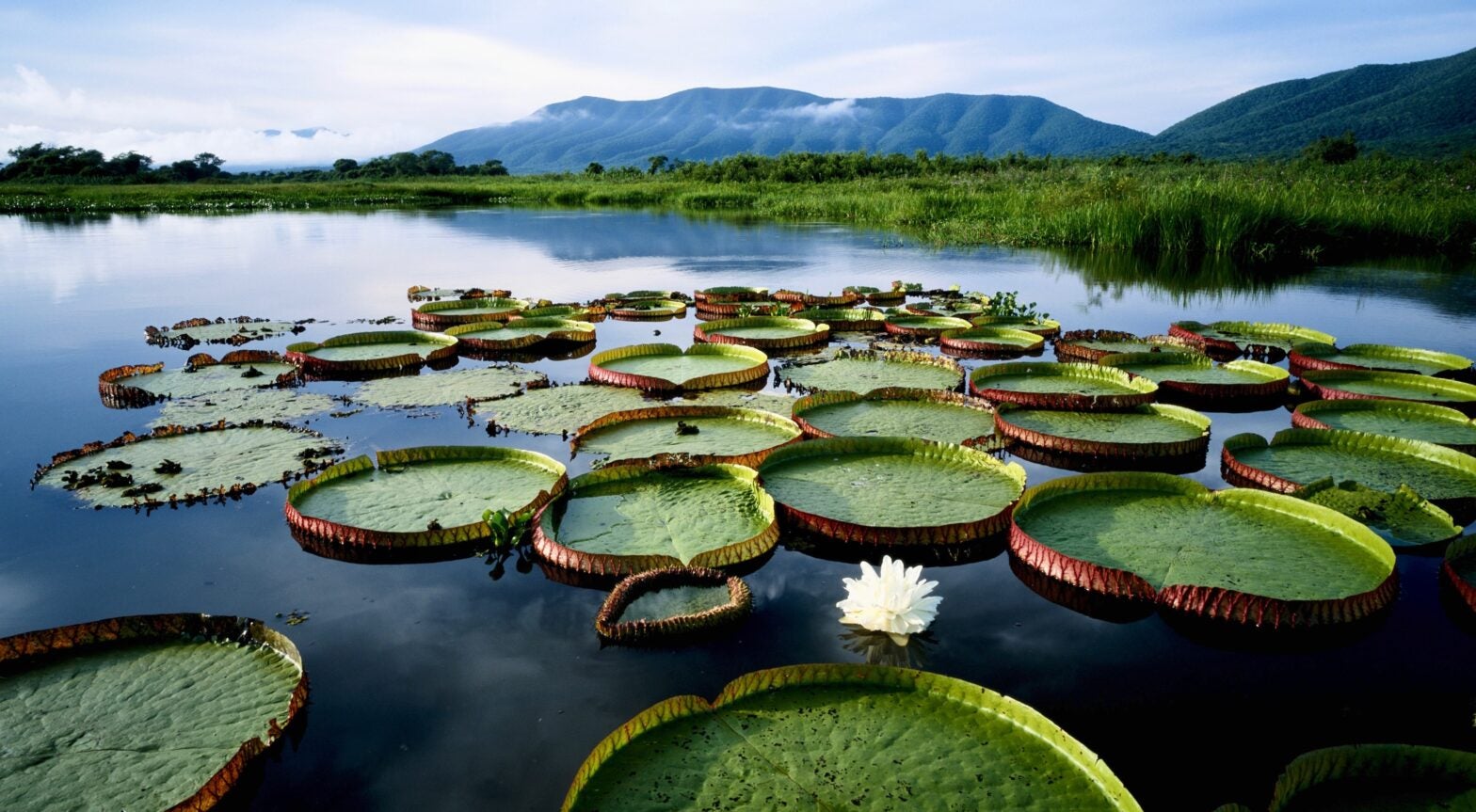 Most people have heard of the Amazon, South America’s famed rainforest and hub of biological diversity. Less well known, though no less critical, is the Pantanal, the world’s largest tropical wetland.

Like the Amazon, the Pantanal is ecologically important and imperiled. Located primarily in Brazil, it also stretches into neighboring Bolivia and Paraguay. Covering an area larger than England at more than 70,000 square miles, the massive wetland provides irreplaceable ecosystem services that include the regulation of floodwaters, nutrient renewal, river flow for navigability, groundwater recharge and carbon sequestration. The wetland also supports the economies of the four South American states it covers.

But as I learned working on a recent research project with the environmental nonprofit WWF, a combination of climate change, new development, expanding agriculture, urban growth and pollution are poised to transform this vast wetland—bringing drastic consequences for the environment, wildlife and millions of people who depend on the Pantanal’s natural hydrology. 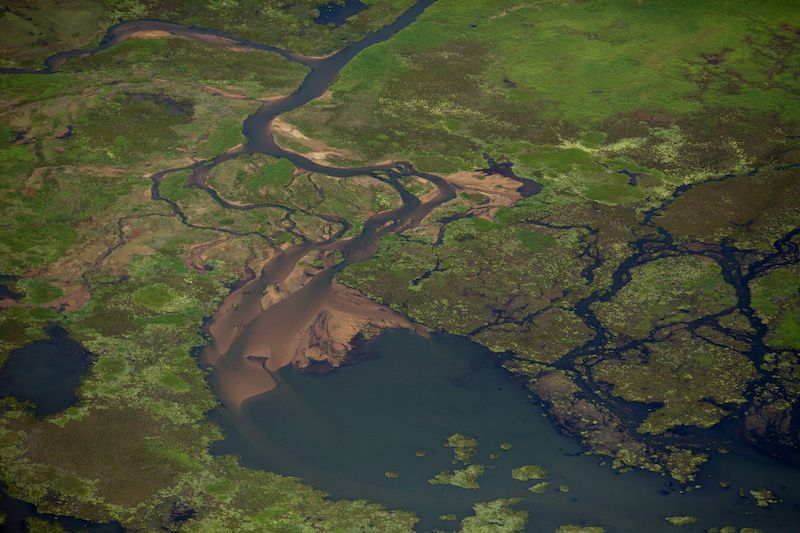 The biggest risk is to the Pantanal’s seasonal flood pulse, which maintains the very health of the wetland system. During the wet season from October to March, rainfall in the headwaters of the Pantanal drains down some 1,200 rivers to fill the vast floodplain, which acts as a sponge for all the incoming freshwater. The once-terrestrial landscape becomes a maze of waterways dotted with lush islands that teem with life.

Then the dry season comes, from April to September, and the floodplain acts as a saturated sponge, slowly squeezing out the water it had soaked up in the months before and supplying moisture long after the rains have gone. The result is a dynamic ecosystem that provides ideal habitat for more than 4,700 plant and animal species and sustains the livelihoods of 270 communities. The Pantanal, in fact, hosts the highest concentration of jaguars in the world and is considered one of South America’s hotspots for mammal diversity.

The Pantanal remains relatively pristine right now, but projections paint a grim picture for this region’s future unless immediate measures are taken. Presently about 12 percent of the wetland, virtually all of which is in private hands, has been deforested. That’s better than the neighboring Amazon, but by 2050 scientists predict the Pantanal’s vegetation could be devastated by the expansion of agriculture and cattle ranching. 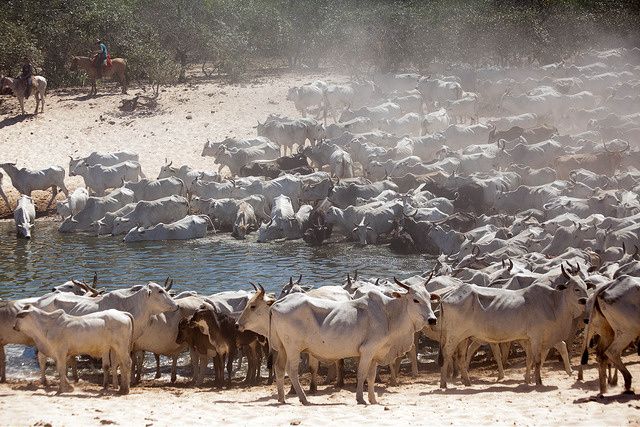 Cattle converge on a watering hole on a ranch in the Pantanal.Kate Gardiner / CC BY-NC 2.0

Climate change adds another threat. Regional temperatures could increase up to seven degrees Celsius by the end of the century, say scientists. The potential consequences of a warmer climate are disastrous: more extreme droughts and floods, the reconfiguration of species distribution, impaired plant function and the Pantanal shrinking in size.

And then there are the dams. The region already has 40 of them, and a whopping 101 additional dams are planned for its headwaters in the Upper Paraguay River Basin. The private sector is financing the construction of most of the dams for the purpose of energy generation, and little is understood about the cumulative impacts of so many hydropower projects on the watershed.

This combination of development, natural habitat conversion and climate change could not only disrupt the ecosystem’s natural rhythm but also result in costly and deadly floods for the millions of people living in the downstream countries of the basin, namely Paraguay, Uruguay and Argentina. Forming part of the headwaters of the Rio de la Plata Basin—the second largest watershed in South America and fifth largest in the world—the Pantanal functions as a natural reservoir for the flood waters draining the upper basin.

A Search for Solutions

How do we counteract the cascade of threats and ensure the Pantanal remains a viable ecosystem?

Along with The Nature Conservancy, WWF published a reportin 2012 identifying the risks confronting the Pantanal as a first step toward evaluating the region’s vulnerability to climate change.

And there’s been some important action in the years following. Since 2015 the governments of Bolivia, Brazil and Paraguay have been working on a transboundary effort called the Trinational Initiative for the Integrated and Sustainable Development of the Pantanal, which entails sustainably developing and conserving this globally unique wetland. The initiative seeks to reduce pollution, strengthen water governance and expand scientific knowledge on the Pantanal, while protecting the rights of traditional peoples. In doing so the three countries would help protect the regional biodiversity, ecosystem functions and the natural flow of the Paraguay River’s tributaries—all of which are vital for ensuring the future resilience of this landscape in the face of climate change.

In a milestone in the progress of the initiative, ministers from all three countries at the 8th World Water Forum in Brazil on March 22, 2018 signed a trinational declaration for the conservation and sustainable development of the Pantanal.

Though the signing is a significant step for conservation, more funding is needed to help enable state governments, local leaders and stakeholders to translate the initiative’s policy stipulations into concrete actions. And more support from the international community is required to further strengthen political will and the policy implementation process.

The Pantanal’s future may also be further jeopardized by recent politics. The October 2018 election of Brazilian President Jair Bolsonaro, who threatened to pull the country out of the Paris climate agreement and roll back national environmental protections, has raised alarm bells in the international environmental community. His political ideology and that of his supporters reflect the line of thinking that natural ecosystems, like the Amazon and the Pantanal, are impediments to development.

Yet Brazil’s own Agricultural Research Corporation has estimated the annual value of the Pantanal’s ecosystem services at $112 billion. 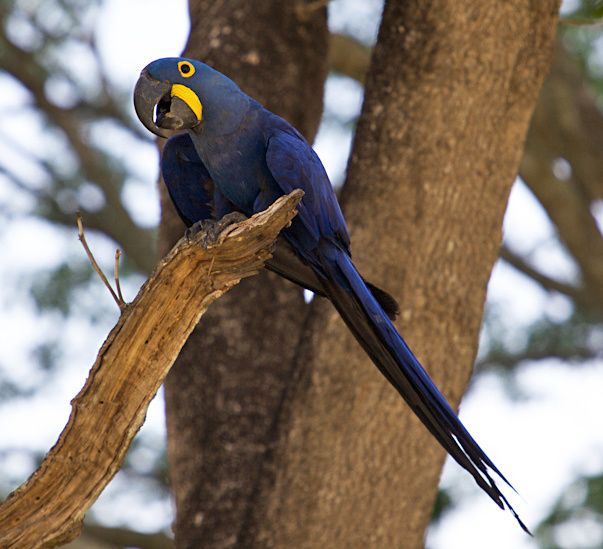 A hyacinth macaw in the Pantanal, Mato Grosso, Brazil.

The loss of the Pantanal could eradicate habitat for myriad species, including jaguars, hyacinth macaw and capybaras, while also changing hydrodynamic patterns in the Rio de la Plata Basin, upsetting the local economies of Brazil, Bolivia and Paraguay, as well as the other countries downstream of the basin.

We know the threats and the consequences of inaction, not only from scientific studies on the Pantanal but from the stories of other major ecosystems threatened or destroyed by lack of protection. The Pantanal is an international litmus test for our environmental values and priorities.

Do we want to witness the destruction of a major ecosystem and home to a diverse community of people? Or do we want the conservation and sustainable development of the Pantanal to become a model for similar future projects around the world?

To most people, the Pantanal is an unknown. That needs to change, and the world needs to step up to conserve it—now.