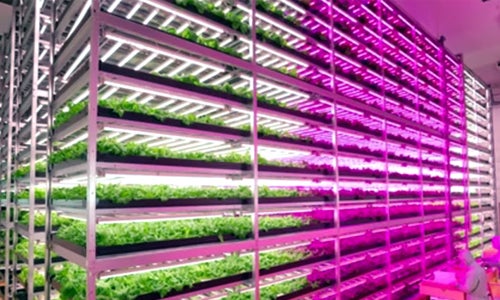 Indoor vertical farming is often derided as a pipe dream and completely infeasible on a commercial scale, but Shigeharu Shimamura’s farm proves that indoor farming is not only possible, but profitable. Shimamura started Mirai, an indoor farming company in 2004. When the Tohoku earthquake and tsunami devastated Japan, sparking the Fukushima nuclear disaster and causing food shortages, Shimamura seized the opportunity to turn an abandoned, semiconductor factory into what is now the world’s biggest indoor farm.

At 25,000 square feet, the farm can yield up to 10,000 heads of lettuce a day. That’s 100 times more per square foot than traditional methods. One of the major obstacles to making indoor farming cost-effective was lighting. General Electric (GE) who partnered with Mirai, reports, “plant factories have typically used fluorescent lamps for artificial illumination, which has low initial costs.” But these fluorescent lights didn’t increase yields enough to cover the energy costs.

Then, GE and Mirai developed LEDs that “generate light in wavelengths adapted to plant growth. While reducing electric power consumption by 40 percent compared to fluorescent lighting, the facility has succeeded in increasing harvest yields by 50 percent.” Since the plants grow twice as fast with 40 percent less power, 80 percent less food waste and 99 percent less water usage than outdoor fields, Mirai has been able to recover the initial cost of the LED lights and make the cost of artificial lighting worth it.

For now, it is only half automated because various tasks including harvesting the lettuce are done by hand. Shimamura, however, predicts the emergence of harvest robots, who can seed, transplant, harvest and package the products.

Indoor agriculture takes out many of the risks inherent in outdoor crop production. By controlling light exposure, temperature, humidity and watering levels, you can grow food very efficiently. Indoor farming has the potential to produce food with less energy, less water, less waste and in less space than traditional methods. Because agriculture has such a significant impact on the environment, indoor farming offers solutions to many of the current problems. It could eliminate land conversion and habitat loss, wasteful water consumption and soil erosion and degradation, just to name a few.

Mirai has two smaller factories in Mongolia, where long, harsh winters stunt the growing season and leave Mongolians without fresh vegetables for many months. Instead of importing them thousands of miles from Europe, they are now able to grow them domestically. Shimamura is looking to expand to Hong Kong and Russia in the near future and eventually all over the world.

As for crops besides lettuce, Shimamura says, “I believe that, at least technically, we can produce almost any kind of plant in a factory. But what makes most economic sense is to produce fast-growing vegetables that can be sent to the market quickly. That means leaf vegetables for us now. In the future, though, we would like to expand to a wider variety of produce.”

In a world facing more and more extreme weather events from climate change, there will likely be more devastating impacts on agriculture, such as those from the Fukushima disaster and Typhoon Haiyan. The GE team in Japan believes that indoor farms could be a key to solving food shortages in the world. Indoor farming takes what factories do best, which is harnessing technology to efficiently produce a good, and what nature does best, which is producing biomass from light, water and nutrients, and combining the two.

If done correctly, indoor farming has the potential to be the best of both worlds. Mirai is by no means the only indoor farming operation in the world. There are more like this one in Chicago. Says Shimamura: “Finally, we are about to start the real agricultural industrialization.”

Watch how it works: