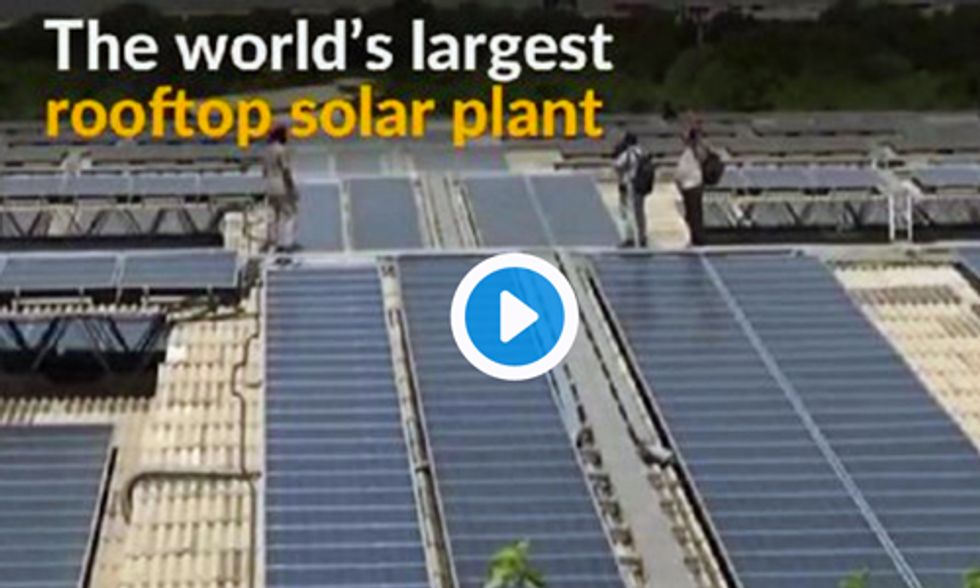 The Indian state of Punjab is now home to the world's largest rooftop solar plant. The massive array will produce 11.5 megawatts of energy and is expected to provide clean power to 8,000 homes.

The plant, which has an installed capacity of 19.5 megawatts, is spread over 82 acres of rooftop in a single campus on multiple roofs at the Dera Baba Jaimal Singh, the world headquarters of the Radha Soami religious organization.

“Today, pollution has become a major source of worry and concern," Majithia told Reuters India, "and renewable energy is the way forward.”

Majithia boasts that the project will help reduce 400,000 tonnes of carbon dioxide over the next 25 years, or the equivalent to planting nearly 200,000 trees.

"Besides," he said, "this project would also go a long way in creating awareness about eco-friendly solar power among the general public, as one crore [or ten million] devotees visit the Dera Baba Jaimal Singh annually," the Times of India reported.

The Rs 1.35 billion project was a collation between the Radha Soami's environmental and educational society and the Punjab Energy Development Agency (PEDA).

PEDA director Balour Singh explained to the Times of India that there are several other 5 megawatt rooftop plants in various countries, including the U.S. and China, but India has the largest one that produces 11.5 megawatts of electricity.

The Hindustan Times reported that a power purchase agreement was signed between the Dera and the Punjab State Power Corporation Limited for 25 years.

Majithia said Punjab was producing only 9 megawatts of renewable energy till February 2012 but has since expanded to 470 megawatts and is expected to hit 1,080 megawatts by the end of the year.

The Indian government has an ambitious goal of achieving 100 gigawatts of solar capacity by 2022. The country has made incredible strides in renewable energy projects, such as its Cochin International Airport in the state of Kerala that's known as the world’s first 100 percent solar airport.