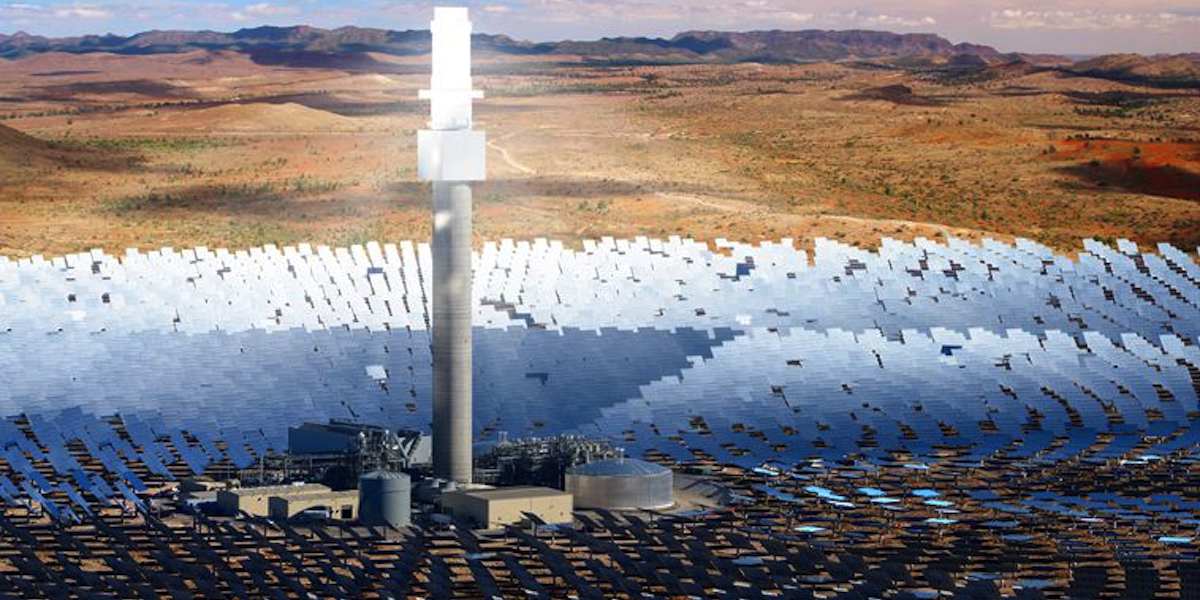 A rendering of the Aurora Solar Thermal Plant. SolarReserve

California-based SolarReserve is behind the $650 million, 150-megawatt “Aurora” project that will be located 30 kilometers north of Port Augusta.

Solar thermal plants are different from traditional photovoltaic panels on rooftops and solar farms. These plants, also known as concentrated solar plants, consists of a large field of moveable mirrors, or heliostats, that concentrate the sun’s rays to a central tower to heat up salt. This molten salt then produces superheated steam to drive a generator’s turbines.

The advantage of this type of power plant is how it can store several hours of energy, allowing for power usage when needed. Such a plant is crucial for South Australia, a state beset by frequent power outages.

“This means that, from storage (its ‘salt battery’) alone, Aurora will be capable of powering South Australia far in excess of State Government buildings, the equivalent of over 230,000 homes for eight hours, or around 35 percent of all of the households in South Australia,” the company said.

According to the Adelaide Advertiser, Aurora is yet to secure its capital funding and a $110 million federal government loan still needs to be delivered.

“It is a significant step in the development of the Aurora solar thermal power station, which will bring clean power generation technology to South Australia,” he said. “The remarkable story of the transition of Port Augusta from coal to renewable energy … is also a preview of the future of power generation around the world … Aurora is an example of how sustainable solutions are able to foster new industries and create new jobs for South Australia.”

The project, which is slated for completion by 2020, will create an estimated 4,700 indirect and direct jobs.

“It’s fantastic that SolarReserve has received development approval to move forward with this world-leading project that will deliver clean, dispatchable renewable energy to supply our electrified rail, hospitals and schools and other major government buildings,” Picton said.

Natalie Collard, the executive general manager of the Clean Energy Council, added: “South Australia is providing the rest of the country a glimpse of a renewable energy future. Our electricity system is rapidly moving towards one which will be smarter and cleaner, with a range of technologies providing high-tech, reliable, lower-cost power.”