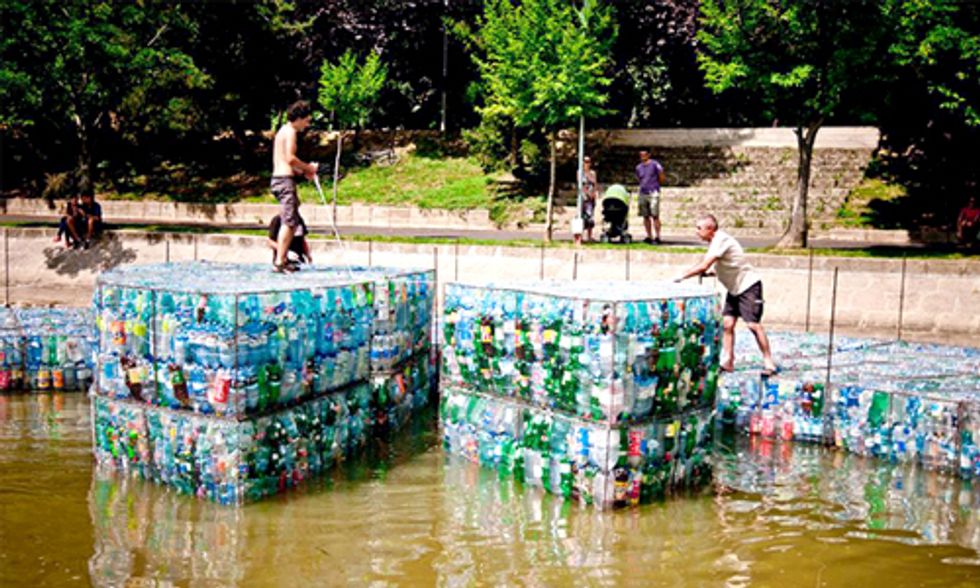 The message of cu.podu is simple: Plastic bottles should not end up in the water.

After a flood created a dam where one could cross the Nera River by stepping on plastic bottles at the point of Danube where it enters Romania, the cu.podu project was born, explained Radu Rusu of EcoStuff. The goal of the project is to do something big enough to draw attention to the enormous quantities of litter dumped every day in the rivers and oceans around the world, like other organizations are doing including 5 Gyres Institute, which just finished a three-week sail from Bermuda to Iceland and found microplastic particles in every surface sample collected during the trip.

The big structure, intended to become the largest plastic bottle structure in the world, is a bridge that crosses the Bega River in Romania, using more than 104,000 used plastic bottles. Small boats can pass under the bridge and the bridge can support more than 200 people.

In March, there was a two week design competition with students at the University of Architecture in Timisoara. Seven teams applied, four proposals were submitted and one was selected. Three weeks later the detailed architectural plans were finalized and construction began in June.

EcoStuff’s volunteers begun to create small “bricks” of plastic bottles tied together with polypropylene thin ropes. These “bricks” were later put together and secured with welded wires and nets, making 76 modules.

Construction of the plastic bottle bridge took five days, starting on July 18. On July 23, the bridge was open to the public. The bridge will stay in place until Aug. 8 and then it will be disassembled and recycled.

Participants of the plastic bridge are now anxiously awaiting the decision by Guinness World Records to find out if cu.podu will officially become the largest plastic bottle structure in the world.