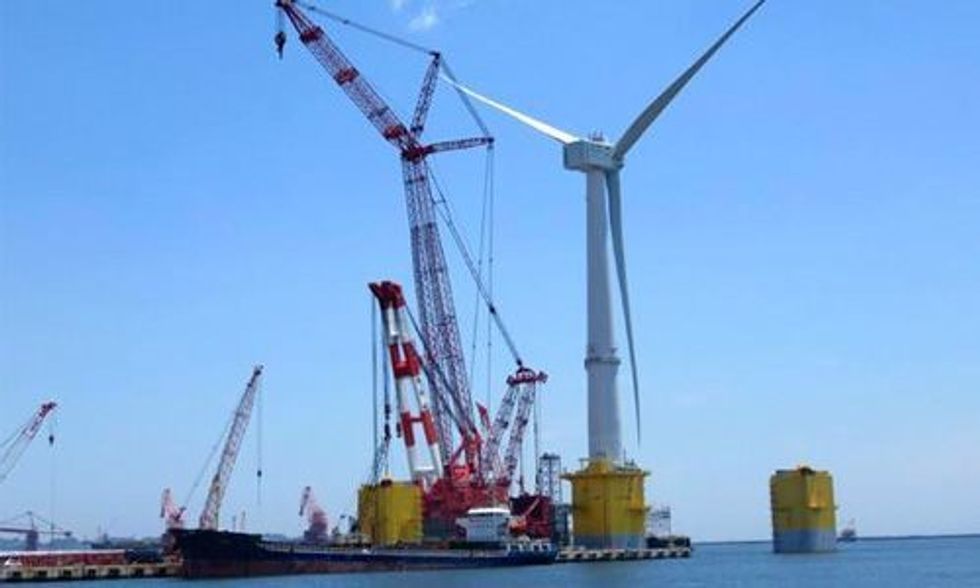 Japan officially unveiled today its 7 megawatt (MW) wind turbine, the world's largest offshore turbine to date. It is slated to be operational by September.

The Fukushima Wind Project, located about 12 miles off the coast of Fukushima, installed a 2 MW wind turbine in November 2013. The turbines are part of a pilot project led by Marubeni Co. and funded by the Japanese government with research and support from several public and private organizations, including the University of Tokyo and Mitsubishi Heavy Industries.

The new turbine, which will tower 220 meters above the sea, will transmit electricity to the grid via submarine cable, according to The Japan Times. The government has allocated 50 billion yen ($405 million) for the project, which allows turbines to float in areas that are "too deep for traditional towers fixed to the seafloor," says Bloomberg News. There are plans to add a third floating turbine with a generating capacity of 5 MW later in the year, which will bring the total output capacity of the project to 14 MW.

Offshore turbines, which have garnered a lot of support in Japan after the Fukushima disaster, "enjoy the benefit of more stable wind than onshore models, and are more efficient because they are not hampered by the constraints posed by land and transportation," says The Japan Times.

“Countries are exploring floating offshore wind technology and Japan is in a sense at the same level with Norway and Portugal,” which have about 2 MW of offshore wind generating capacity, Yasuhiro Matsuyama, a trade ministry official in charge of clean energy projects, told Bloomberg News.

In the U.S., Deepwater Wind broke ground (or should I say broke water) this spring on the country's first offshore wind farm off the coast of Rhode Island. When it is finished, the five turbines will have a generating capacity of 30 MW.