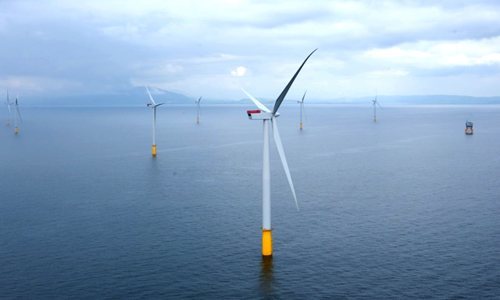 Dong Energy is building the world’s largest offshore wind farm off the coast of the UK. Photo credit: Dong Energy

The project is expected to power more than a million homes when fully commissioned in 2020.

“Hornsea Project One is a world-leading infrastructure project being built right here in the UK,” Brent Cheshire, DONG Energy UK’s country chairman, said. “It is ground-breaking and innovative, powering more homes than any offshore wind farm currently in operation.”

“To have the world’s biggest ever offshore wind farm located off the Yorkshire coast is hugely significant, and highlights the vital role offshore wind will play in the UK’s need for new low-carbon energy,” Cheshire added.

“The UK is the world leader in offshore wind energy and this success story is going from strength to strength,” Amber Rudd, UK secretary of state for energy and climate change, said. “The investment shows that we are open for business and is a vote of confidence in the UK and our plan to tackle the legacy of under investment and build an energy infrastructure fit for the 21st century.”

“This project means secure, clean energy for the country, jobs and financial security for working people and their families, and more skills and growth boosting the Northern Powerhouse,” Rudd added. The project will create an estimated 3,000 jobs during the construction phase and an additional 300 permanent jobs.

Offshore wind was the only major renewable energy source not to face cutbacks in subsidies in the past year, Bloomberg Business noted. However, the UK wind industry as a whole took a hit last year when the government ended subsidies for onshore wind. “While offshore wind is still favored by ministers, the blow to onshore wind—which is much cheaper, and when carbon emissions are taken into consideration is cheaper than traditional fossil-fuel forms of generation—has been a cause of concern to wind investors,” The Guardian said. “The potential investment into wind turbine manufacturing factories, much vaunted under the coalition government, has been called into question.”

The Hornsea project is “a major step forward,” RenewableUK, which represents the UK’s wind power industry, told The Guardian.

“[This] is an important step in making this historic project a reality,” Maf Smith, deputy chief executive of RenewableUK, said. “It signals the start of creating a new landmark in the North Sea. Its size is guaranteed to bring a multitude of benefits to the UK, [such as] a huge amount of inward investment and the creation of local jobs. It will play an important part in meeting our commitments [under the Paris agreement on climate change and] help create the new energy infrastructure this country desperately needs.”

The massive project will span an area of approximately 157 square miles in the North Sea, an area larger than Malta. Photo credit: Dong Energy

The project will use 7-megawatt wind turbines built by Siemens in their new turbine production facility in Hull, and UK infrastructure company Balfour Beatty will construct the onshore substation.

As part of the project, Dong Energy will build the longest offshore wind farm high-voltage AC electrical system in the world. This system, which includes about 560 miles of cables, will take the electricity produced by the wind turbines, transmit it to shore and then feed it into the national grid.

Onshore construction work will start immediately, with offshore work scheduled to begin in 2018. Power generation from the site is expected in 2019, with the project fully commissioned by 2020, Henrik Poulsen, chief executive officer of Dong Energy, said.

The project is massive and boasts a number of firsts. It will take up an area larger than Malta, and it is the first time a wind farm has been built so far from shore.

To learn more, watch this video: