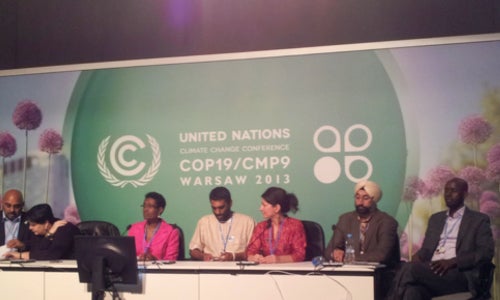 Climate change is real; it’s happening at an alarming rate and human-activities, mainly the burning of fossil fuels, are causing it, the International Panel on Climate Change (IPCC) warned in September.

The devastating human face of this tragedy has been on display in the Philippines this week, where one of the strongest typhoons ever recorded made landfall, costing thousands of lives and homes. 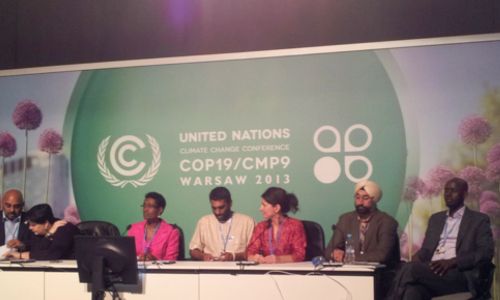 At a joint press conference by WWF, Greenpeace, ActionAid, Friends of the Earth (Europe), Oxfam and the International Confederation of Trade Unions, the NGOs called on all leaders in Warsaw they will choose a future without run-away climate change. Photo credit: WWF

Climate impacts are already affecting millions of people across the world in the form of more unpredictable rainfall patterns, more erratic severe and extreme weather, rising sea levels and melting glaciers. This is putting pressure and stress on our farmers and food systems, driving price spikes, food shortages and more hunger.

And many millions more could be affected in the future as homes and communities are destroyed, and our lives and livelihoods are disrupted or lost—unless world leaders take meaningful action against climate change.

So far, governments and business leaders have failed to put the world on a path to sustainable and climate-friendly development for all that stays within ecological limits.

That is why frustrations are rising and civil disobedience is on the increase. Carbon dioxide (CO₂) emissions are at an all-time high. We stand with those, like the Arctic 30, who stood up for the interests of us all by saying no to further fossil fuel extraction.

We, six of the worlds’ largest environmental and development non-government organizations, with the International Trade Union Confederation, make a unified call on governments to act on the findings of the IPCC at the UN Climate Conference in Warsaw and to:

If all of these tests are not met, it will represent a tragic failure:

Warsaw should be a step forward for a just transition, shifting our communities and economies onto a more sustainable path. Governments must start this transition and ensure the decent jobs of a sustainable future are available for all.

The energy sector is at the forefront of this transition, as it is the main source of climate pollution. Extraction of fossil fuels is also increasingly a driver for the displacement of people, local pollution, water shortage and loss of biodiversity.

At the same time, renewable energy provides a straightforward, proven and increasingly affordable solution (with far fewer direct impacts) that can also bring energy access to the 1.3 billion people currently without power. If we are to follow what the science says, then we have to stop investing in fossil fuels and shift those investments into energy efficiency and sustainable renewable energy.

Governments at Warsaw should take concrete steps to stop public handouts to dirty energy companies and to support measures such as a globally funded feed in tariff that would bring clean, affordable energy to the world’s poor; and to provide public funding at scale to support desperately needed adaptation efforts; and establish a meaningful mechanism to deal with loss and damage.

We call on all leaders to prove in Warsaw that they will choose clean energy over dirty energy, renewables over fossil fuels, peoples’ needs and desires over corporate interests, and a safe future without run-away climate change.