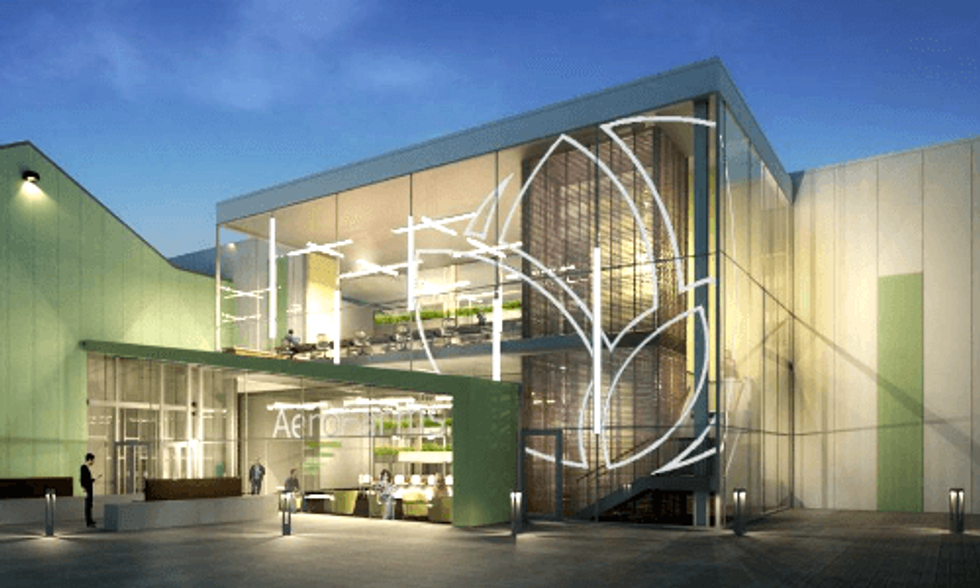 An artist rendering of the 69,000-square-foot AeroFarms headquarters in Newark, New Jersey. AeroFarms

Newark, New Jersey will soon be home to the largest indoor vertical farm in the world. The city just broke ground on the massive, 69,000-square-foot AeroFarms headquarters that's capable of producing up to 2 million pounds of vegetables and herbs annually once it's in full operation.

The new $30 million complex dwarfs Japan's (already impressive) 25,000-square-foot vertical indoor farm, which had been the world's largest until now.

Merging agriculture and the latest in technology, the AeroFarms system relies on LED lights, aeroponics (where plants basically grow in nutrient-rich mist) and climate control. Plants grow in stacked racks without sun, soil or pesticides.

In the Bloomberg video below, AeroFarms CEO and co-founder David Rosenberg explains how conditions such as lighting, oxygen, carbon dioxide, temperature and pH balances can be optimized inside the farm to create the perfect growing environment.

"If we're talking about feeding a planet of 8 billion or 9 billion, we need a new paradigm of how we grow our food. This is it. This is the future," Rosenberg said about the project.

According to projections from the United Nations, the world's population will reach 9.6 billion people by 2050, 86 percent of whom will live in cities that might be far-removed from traditional farms. For people who live in major commercial cities such as Newark, these sky-high farms allow access to fresh, nutritious food year-round.

Vertical farms have been touted as the future of food and agriculture. As we have mentioned before, these farms are ideal because they grow produce where traditional agriculture would have been impossible. Since growing is done indoors, the plants are immune to inclement weather and natural disasters that can wreak agricultural havoc and cause food shortages. So while we might not think of Newark as an agricultural hub, a vertical farm actually makes a lot of sense for a city with long winters and memories of Hurricane Sandy still fresh.

Not only that, NBC News reported that the project will create nearly 80 local jobs, which is much-needed for a community with twice the unemployment rate of the national average. The farm will also supply fresh produce to local businesses and restaurants, cutting transportation costs and the many miles that food usually travels to get to plates, the news outlet reported.

Newark Mayor Ras. J. Baraka also spoke about how the farm is an important educational tool for the community. "Any sort of urban farming will have a positive impact on the physical health of its citizens. There will be opportunities to educate our citizens about eating smart, even on a budget," Baraka told NBC News. "Many students who grow up in urban communities never experience rural living—they have never seen fruits or vegetables growing from their source. What an incredible science lesson it will be to bring classes to this urban farm."