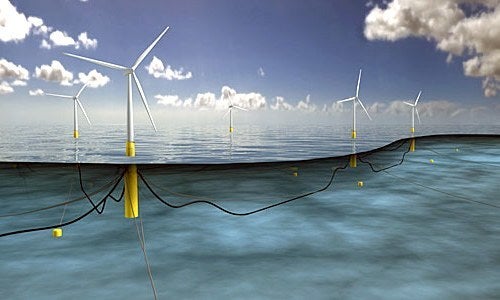 Offshore wind has come a long way in recent years, in large part because of how heavily the UK has invested in the technology. But most of this development has been with conventional wind technology, which requires that the turbines be mounted to the seafloor or lakebed in relatively shallow water.

Floating turbines have been deployed, but so far only in small-scale projects, such as the one built and operated by the Fukushima Wind Offshore Consortium. But that could all change soon, now that Norway’s Statoil has been approved to build the first floating wind farm off the Scottish coast. It will be the UK’s first floating wind farm and the world’s largest to date, with five floating turbines producing 6 megawatts each in waters more than 328 feet deep.

The project, known as Hywind Scotland, will be located near Buchan Deep, approximately 15-18 miles off the coast of Peterhead in Aberdeen. The farm “could eventually generate 135 gigawatt-hours of electricity a year, enough to power nearly 20,000 homes,” reports Edie.net.

Statoil is touting its experience in installing and operating floating offshore oil and gas platforms as part of its credentials for the project. “Hywind has been designed as a slender cylinder structure, chosen as the most feasible and economical concept for a floating wind turbine,” says Statoil. The company developed and installed the world’s first floating full-scale wind turbine in 2009.

The turbines will be “attached to the seabed by a three-point mooring spread and anchoring system” and “are interconnected by cables, one of which exports electricity from the pilot farm to the shore at Peterhead,” explains The Guardian.

Floating turbines have many attractive benefits, according to Renewable Energy World:

A key advantage of using floating wind platforms is that they allow developers access to previously inaccessible waters where there is stronger yet less turbulent winds—helping to reduce the overall cost of wind energy.

Another benefit is that floating platforms can generally be commissioned and assembled at the quayside, without the need for heavy-lift jackup or dynamic positioning (DP) vessels, further reducing the cost and risk of deployment activities.

The fact that foundations are not necessary with floating technology also means that piling activities and sea life disturbance can be minimized—greatly reducing negative environmental impacts. Moreover, reduced geotechnical requirements mean that core sampling is only needed to test the seabed ahead of appropriate anchor selection, as opposed to the necessity of core sampling at every pile site.

According to research from the Carbon Trust, floating wind turbines could reduce the price of offshore wind to less than $150 megawatt-hours (MWh), and larger projects such as Hywind may drop the price even lower to $130-145 MWh. The current average price is $172 MWh.

“We are proud to develop this unique project in Scotland, in a region that has optimal wind conditions, a strong supply chain within oil and gas and supportive public policies,” she added.

You may have heard of Aberdeen in the news, as it is the proposed location of another wind farm: Aberdeen Bay Wind Farm. The project has been stalled for years because Donald Trump, who has a golf resort in Aberdeen, sued the Scottish government over its approval of the wind farm. Trump lost the appeal in June, but he has vowed to appeal before both the UK Supreme Court and the European Courts.