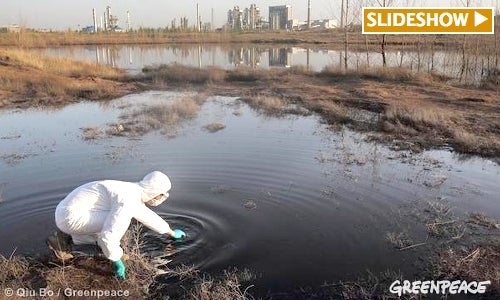 Last year, Greenpeace decided to do something we had never done before during our 13 years of work in China: Target and confront a state-owned coal company.

And not just any company. The biggest and boldest, a Chinese government favorite: Shenhua—the largest coal company by volume on the planet.

We discovered that Shenhua’s subsidiary had been over-using water for their coal facility in Inner Mongolia, one of the most arid areas of China and confronted them with the evidence.

First we faced the censorship of our report but now, a year later, we have finally got a result.

On April 4 2014, Shenhua met with Greenpeace to say that they have agreed to many of our demands. In particular, Shenhua said they would stop taking water from the area where farmers had been left with failed crops and dried up lakes.

It’s a small victory—yet it could send shockwaves around the world, since nobody has ever done this before.

Firstly, the fact that a non-governmental organization has exposed a state owned company for their environmental actions and got them to back off will send chills down the spines of other big coal companies in China who have previously believed they could operate with impunity.

Secondly, local officials who control the water allocation in China can see that the coal companies are not sacred cows—a local campaign can indeed get the companies to comply with the rules on water usage.

And most importantly, the climb-down sends a further message that coal use in China is under increasing pressure from different sides: From the government’s air pollution reduction plan to coal consumption caps in eastern China to Chinese climate targets. And now increasingly from water use rules and limitations in western China, which are limiting the expansion of this industry in dry Inner Mongolia. Even Shenhua confirms this by their action.

The story of the Shenhua investigation

We have worked on all of these areas for years, but it took a year-long Greenpeace investigation on the ground to make the breakthrough.

Instead of just talking about the wider threat, we started to document the area in Inner Mongolia in Haolebaoji where Shenhua’s coal-to-chemical company has been pumping water to help make liquid fuels from coal.

This is an increasingly typical setup for China’s coal industry, producing different fuels and products from coal, a process that is often very water intensive.

Our staff photographed the drought in Haolebaoji and compared the dried up trees and farmland, to pictures taken over a decade ago, with lush vegetation and gushing water wells.

We interviewed the locals who had been protesting because farming the land had become virtually impossible. They told the same story as the photos. The groundwater, pumped up by the company, had been deplenished in an alarming rate, forcing the locals to drill even deeper wells and in the end abandon their farmland.

Digging deeper, our researchers found direct evidence of polluted wastewater discharges near the plant, discharges the firm tried to cover up after our visit.

We published our findings last July, only to find ourselves being faced with severe censorship. Many journalists attended our press conference – few could get their stories published.

Determined to push on, we took our campaign to Hong Kong, which does not have media censorship and where Shenhua is listed in the stock markets.

We entered the Shenhua press event with our own story to tell, the one they didn’t want journalists and investors to hear. Around the world we kept talking to investors and the financial media explaining how water shortages would put a limit on China’s attempts to expand coal production.

But whilst we lobbied from the outside, we also keep talking to Shenhua’s representatives discussing what could they do and what should they do to help the situation. Finally we got this plan. Something we definitely want to keep watching, as we continue our campaign on the water use of coal companies.