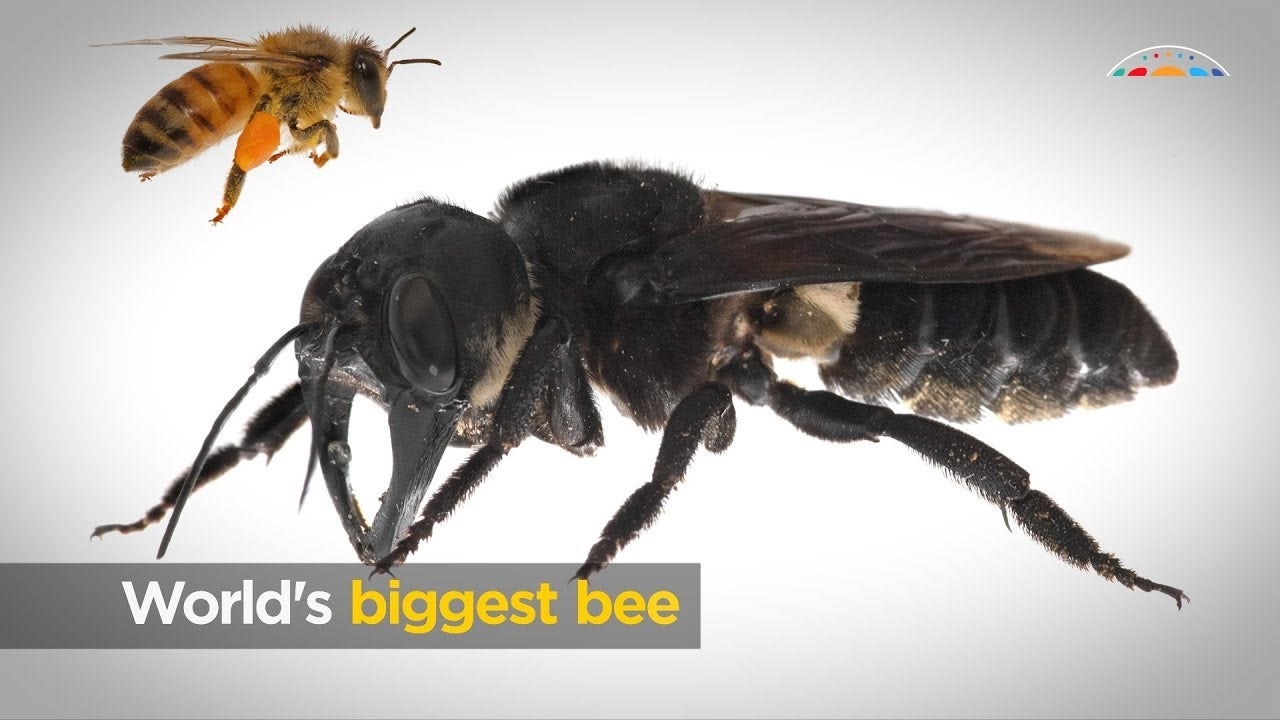 A giant bee the size of an adult thumb was found alive for the first time in nearly 40 years, The New York Times reported Thursday.

The sighting, by a team of wildlife conservationists this January, proves that the world’s largest bee had not gone extinct since it was last documented by scientists 38 years ago, though its habitat in a group of Indonesian islands called the North Moluccas is threatened by deforestation. The team recorded the bee on photo and video for the first time.

“It was absolutely breathtaking to see this ‘flying bulldog’ of an insect that we weren’t sure existed any more,” conservation photographer Clay Bolt, who took the first pictures of the living female bee, said, according to The Guardian. “To actually see how beautiful and big the species is in life, to hear the sound of its giant wings thrumming as it flew past my head, was just incredible.”

Wallace’s Giant Bee, scientific name Megachile pluto, was made known to Western science by Alfred Russel Wallace, an English entomologist who worked with Charles Darwin on the theory of evolution. Wallace documented the bee, which now bears his name, on an expedition in 1859, according to The New York Times.

The bee was next seen by scientists more than 100 years later when entomologist Adam Messer observed multiple Wallace’s Giant Bees in 1981 and took specimens back to museums in New York and London. Messer noted that they use their large jaws to scrape wood and tree resin into balls to make stronger nests. There have been several other attempts to document the bee, but none have proven successful until now.

“I personally know of at least five attempts to find the bee,” Bolt told The New York Times.

This particular attempt was partly funded by the group Global Wildlife Conservation, which is searching for 25 lost species including the bee and the Fernandina Galápagos Tortoise, which was sighted for the first time in more than 100 years this Sunday.

The world’s largest #bee, Wallace’s Giant Bee (Megachile pluto), has been rediscovered! This marks the 2nd rediscovery of a species from our top 25 most wanted lost species. Read more here: https://t.co/fDvMpJdfGP. via @mashable #ConservationOptimism pic.twitter.com/FiDVekwydc

The scientists involved with the search were partly concerned that announcing the bee’s survival would bring it to the attention of collectors, and, because of this, decided not to announce exactly what island they found it on. Last year, a specimen of the insect was sold on eBay for $9,100.

“If you can get that much money for an insect, that encourages people to go and find them,” team member and University of Sydney biologist Dr. Simon Robson told The New York Times.

However, the team agreed that making the announcement opened up important conservation opportunities.

“We know that putting the news out about this rediscovery could seem like a big risk given the demand, but the reality is that unscrupulous collectors already know that the bee is out there,” Global Wildlife Conservation biologist Robin Moore said, according to The Guardian. “By making the bee a world-famous flagship for conservation we are confident that the species has a brighter future than if we just let it quietly be collected into oblivion.”

The region of Indonesia where the bees are found lost seven percent of its forest from 2001 to 2017, according to Global Forest Watch data reported by The New York Times.

“Amid such a well-documented global decline in insect diversity it’s wonderful to discover that this iconic species is still hanging on,” Robson said in a University of Sydney press release.