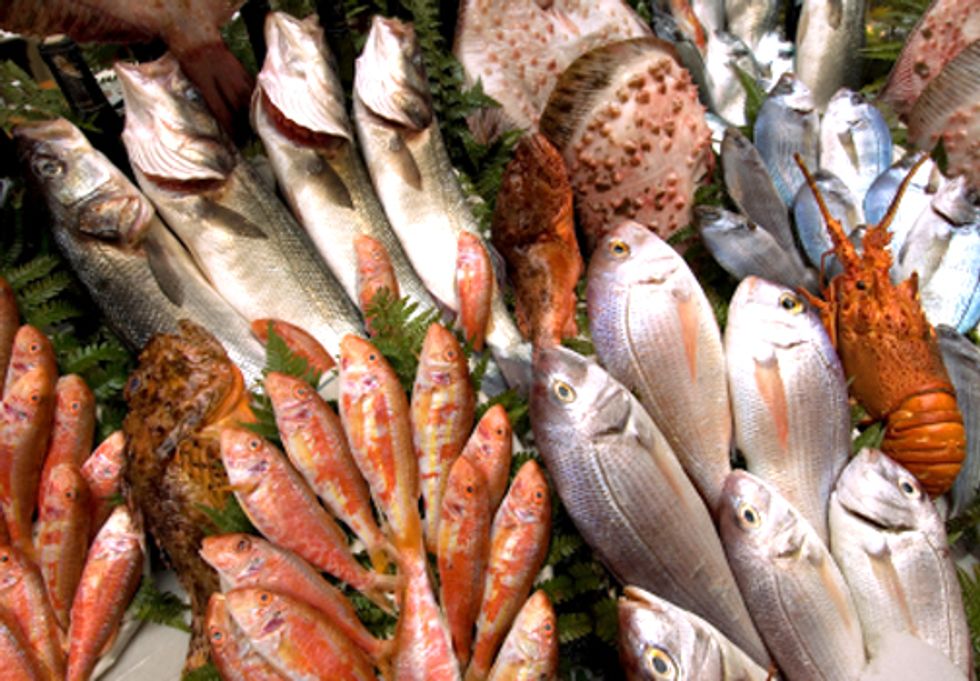 Total global fish production, including both wild capture fish and aquaculture, reached an all-time high of 154 million tons in 2011, and aquaculture is set to top 60 percent of production by 2020, according to new research conducted by the Worldwatch Institute. Wild capture was 90.4 million tons in 2011, up 2 percent from 2010. Aquaculture, in contrast, has been expanding steadily for the last 25 years and saw a rise of 6.2 percent in 2011, write report authors Danielle Nierenberg and Katie Spoden.

"Growth in fish farming can be a double-edged sword," said Nierenberg, co-author of the report and Director of Worldwatch's Nourishing the Planet project. "Despite its potential to affordably feed an ever-growing global population, it can also contribute to problems of habitat destruction, waste disposal, invasions of exotic species and pathogens, and depletion of wild fish stock."

Humans ate 130.8 million tons of fish in 2011. The remaining 23.2 million tons of fish went to non-food uses such as fishmeal, fish oil, culture, bait and pharmaceuticals. The human consumption figure has increased 14.4 percent over the last five years. And consumption of farmed fish has risen tenfold since 1970, at an annual average of 6.6 percent per year. Asia consumes two thirds of the fish caught or grown for consumption.

The fish sector is a source of income and sustenance for millions of people worldwide. According to the UN Food and Agriculture Organization, for every one job in the fish sector, three to four additional jobs are produced in secondary activities, such as fish processing, marketing, maintenance of fishing equipment, and other related industries. And on average each person working in the fish sector is financially responsible for three dependents. In combination, then, jobs in the primary and secondary fish sectors support the livelihoods of 660 million to 820 million people—10-12 percent of global population.

Although Africa is only the fourth largest producer of fish in the world, its water resources are highly sought after by larger, more-competitive fishing trawlers. Extreme overfishing occurs when foreign trawlers buy fishing licenses from African countries for marine water use. In West African waters, foreign trawlers pose a threat because factory ships from the United Kingdom, other countries within the European Union, Russia, and Saudi Arabia can outcompete the technologies used by local fishers. In Senegal, for example, a local fisher can catch a few tons of fish each day in the typical 30-foot pirogue. In contrast, factory ships from industrial countries catch hundreds of tons daily in their 10,000-ton factory ships.

Wild fish stocks are at a dangerously unsustainable level. As of 2009 (the most recent year with data), 57.4 percent of fisheries were estimated to be fully exploited—meaning current catches were at or close to their maximum sustainable yield, with no room for further expansion. Of the remaining fisheries in jeopardy, around 30 percent were deemed overexploited, while a little less than 13 percent were considered to be not fully exploited.

A number of government initiatives give some hope to a future of sustainable fishing. In the U.S., the Magnuson-Stevens Act mandated that overfished stocks be restored; as of 2012, two-thirds of U.S. stocks are fished sustainably and only 17 percent are fished at overexploited levels. In New Zealand, 69 percent of stocks are above management targets, but Australia only reports 12 percent of stocks at overexploitation levels due to increased government fishery standards.

To maintain the current level of fish consumption in the world, aquaculture will need to provide an additional 23 million tons of farmed fish by 2020. To produce this additional amount, fish farming will also have to provide the necessary feed to grow the omnivorous and carnivorous fish that people want. Aquaculture is being pressured to provide both food and feed because of the oceans' overexploited fisheries.

Continually increasing fish production, from both aquaculture and fisheries, raises many environmental concerns. If aquaculture continues to grow without constraints, it could lead to degradation of land and marine habitats, chemical pollution from fertilizers and antibiotics, the negative impacts of invasive species, and a lessened fish resistance to disease due to close proximity and intensive farming practices. To prevent these problems, policymakers, fishers and consumers need to find alternative sources for fish feed, combat illegal fishing, encourage more-sustainable practices in aquaculture, acknowledge the potential effects of climate change on the oceans, and think critically about what and how much fish to consume.

• In 2010, some 54.8 million people were directly engaged full-time or part-time in capture fisheries or aquaculture.