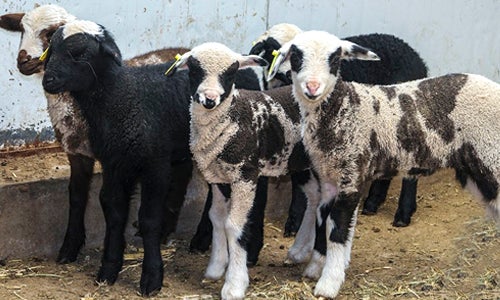 According to Xinhua, two of the sheep have black and white fur “like cows,” another two have black with white spots like “spotty dogs” and the fifth sheep has brown and white like “unstirred cappuccino.”

This is the first time that scientists have altered the coat colors of large animals using the controversial technique, the Chinese publication noted. Color alteration has been previously achieved on mice.

“The lambs, born in March, have become our lovely pets,” head researcher Liu Mingjun told Xinhua, adding that with the CRISPR-Cas9, pet owners can order their pets with customized fur coloring.

He also noted that consumers will be able to buy wool products in various colors that doesn’t need to be dyed.

The research team reportedly edited the animals’ ASIP gene which affects the color of their fleece.

“The application to large animals indicates more strains of animals, not limited to livestock, will be developed via the approach, with different patterns not limited to coat colors,” Liu said about the burgeoning CRISPR technique.

“Compared with traditional gene mutation approaches in which researchers take decades to breed a new strain, gene editing is much more effective.”

Translation: these are genetically modified organisms (GMOs) on a whole new level. Compared to say, Monsanto’s Roundup Ready Bt corn that contains a gene from the bacteria Bacillus thuringiensis or AquaBounty’s GMO salmon that has a gene from eel-like ocean fish, CRISPR-edited foods, like the mushroom mentioned below, or animals, like the “spotty dog” sheep, are altered without adding genes from another species.

Cas9 is an enzyme that snips DNA, and CRISPR is a collection of DNA sequences that tells Cas9 exactly where to snip. All biologists have to do is feed Cas9 the right sequence, called a guide RNA, and boom, you can cut and paste bits of DNA sequence into the genome wherever you want.

The CRISPR is bringing a whole new dimension to the GMO debate, which Americans largely distrust.

There are already several CRISPR projects in development, including DuPont’s drought-resistant wheat and corn, a banana that can resist a fungus that’s threatening its extinction and a herbicide-resistant oilseed from the biotech company Cibus.

In April, the U.S. Department of Agriculture (USDA) paved the way for the first food product—a common white button mushroom genetically altered to browning—made with the CRISPR-Cas9.

The USDA said it will not regulate the potential cultivation and sale of the mushroom because they had “no reason to believe that CRISPR/Cas9-edited white button mushrooms are plant pests” and “do not contain any introduced genetic material.”