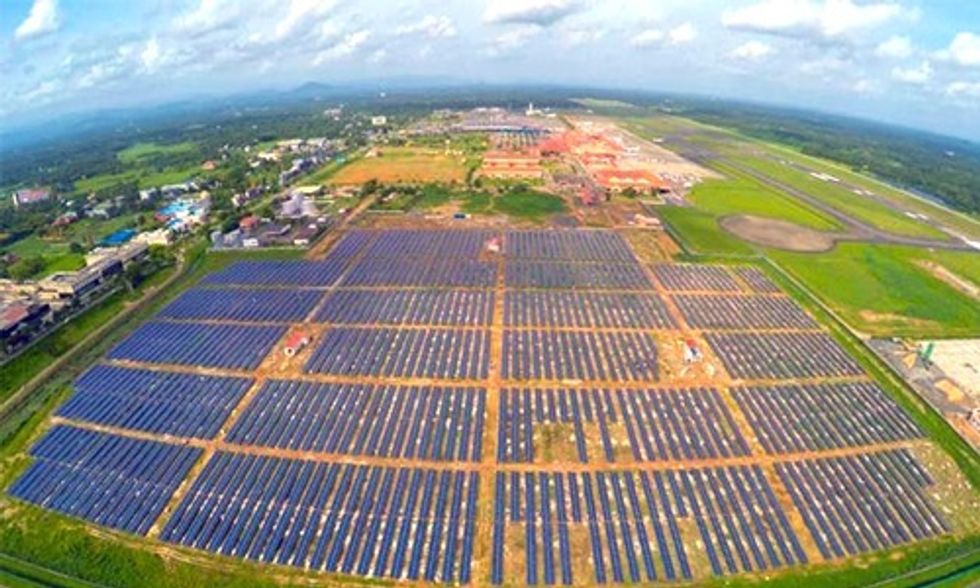 More than 46,000 solar panels have been laid out across 45 acres of land to fuel the operations of Cochin airport, India’s fourth largest in terms of international passenger traffic.

Officials at the airport in the south-western state of Kerala say it will now be “absolutely power neutral”—and will even produce an excess that will boost the state’s electricity grid.

The project’s designers say between 50,000 and 60,000 units of electricity will be supplied each day by the 12 megawatt plant, commissioned by the German multinational engineering and electronics company Bosch at a cost of US$9.5 million.

“When we realized the scale of our power bill, we looked at various possibilities,” says V.J. Kurian, Cochin International’s managing director.

“We consume around 48,000 units of power a day. So if we can produce the same by strictly adhering to the green and sustainable model of infrastructure development we always follow, we can send a message to the world.

“Now this has become the world’s first airport that fully operates on solar power. In fact, we are producing a few megawatts of extra energy, which is being contributed to the state’s power grid.”

India, which relies heavily on coal-fired power plants for its energy, is the world’s fourth biggest emitter of greenhouse gases (GHGs), sending nearly 1.3 million tonnes into the atmosphere each year. China is the world’s biggest polluter, with annual GHG emissions of more than six million tonnes.

Other airports in India are now being urged by the government to follow Cochin’s lead. The Netaji Subash Chandra Bose International Airport in Kolkata, West Bengal is already planning to set up a 15 megawatt solar plant on 60 acres of land.

Around the world, other airports are adopting solar power to run all or part of their ground operations.

A new international airport in Mexico City aims to be the world’s most sustainable when completed in 2018. The revamped Terminal 2 at London Heathrow airport has many solar features integrated into its operations. And Denver International is one of a number of U.S. airports utilizing solar power plants.

The airport’s public relations manager, P.S.Jayan, told Climate News Network: “During the inauguration of the airport service, schoolchildren visited to see how solar energy is used to operate the entire airport facility.

“We have received many requests from schoolteachers who want to send their students here to learn about renewable energy.”