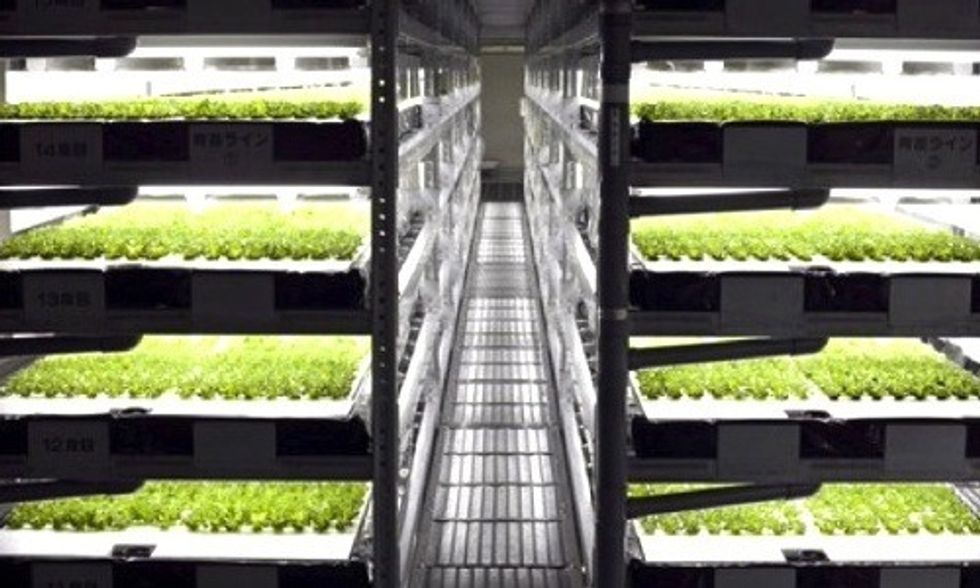 A new vegetable factory in Japan will be the world's first indoor farm without any farmers. Spread, a food technology company focused on sustainable growing, will open its robot-run, 4,800-square-meter facility in Kyoto in the summer of 2017, and will produce 30,000 heads of lettuce per day, or about 10 million heads per year, Mashable reported.

How one company is growing the future of automated agriculture https://t.co/VSMbd6XWWg https://t.co/1edbpnZhvf
— Mashable (@Mashable)1447689998.0

According to a press release, Spread's new facility will have two primary goals: low cost and environmental friendliness.

Like many other vertical farms, Spread's new veggie factory will not use pesticides or herbicides. It will also significantly minimize water use by recycling 98 percent of it. Temperature, lighting and moisture will be automated in order to optimize plant growth.

Spread already runs a prototype factory in Kameoka, Japan that produces about 21,000 heads of lettuce each day. The produce is then shipped to approximately 2,000 stores in Tokyo and the Kansai region, branded as Vege-tus.

Another purpose of the robot-run factory is to reduce any risks of human contamination, according to the company. “In the current factory located outside of Kyoto city, in Kameoka, Japan, any workers that come into physical contact with the lettuce must wear a cleanroom suit and go through an air shower," Spread Global Marketing Manager J.J. Price told Mashable.

“In the new Vegetable Factory, the risk of contamination is further reduced since the majority of processes will be fully automated—from raising the seedling to harvest—which will reduce the direct contact the lettuce has with people," Price said.

“The biggest challenge that we face is further decreasing the initial investment costs for construction, so that we can truly make this technology and technique affordable anywhere in the world,” Price told Mashable.

According to Fast Company, "compared to Spread's current factory, the new one will cut labor costs by 50 percent, so the company can sell lettuce at a lower price (now, it sells for the same cost as regular lettuce from the field)."

Spread's sustainable technologies augment efficiency for the company. “Operation costs have been falling due to advances in technology, such as more efficient LED lighting, water recycling and air management systems. The introduction of automation also reduces many of the associated labor costs, so we believe that we are on the right track,” Price said.

He added that the company seeks to diversify their products outside of lettuce and believes that the vegetable factory will be a big player in future of global food security. Indoor farms can be built in any climate and can adapt to extreme weather and natural disasters.

Japan currently imports about 60 percent of its food each year, but this new factory will increase local food options, according to Fast Company.

“For those who dream big, we can see this becoming an important part in space travel and colonization,” Price said. “Our system can fundamentally be built in many different environments and provides a highly efficient method to use resources and produce food.”