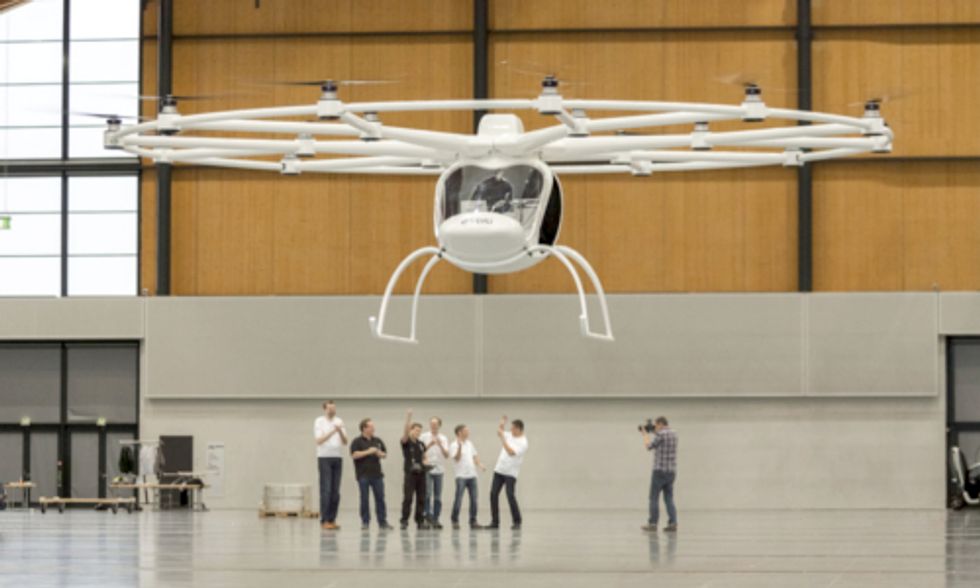 The emissions-free VC200 Volocopter hovered over its creators, the E-volo team, in a hangar in the City of Karlsruhe. The "multicopter" has 18 spinning blades and quietly soared to about 72 feet.

Following the test flight, the company described the vehicle as having a “rich and incredibly quiet sound, absolutely no noticeable vibrations in the flight, convincing structure with a great, new spring strut landing gear and an extremely calm rotor plane,“ according to a statement.

Next, E-volo will further develop the Volocopter in a two-year collaborative program with the German Federal Aviation Office and the German Ultralight Aircraft Association. That includes flying it over "uninhabited areas for days on end" in order to gauge the reliability of its safety devices and electrical steering.

The vehicle will go into production in the "coming years," according to the company.

“We believe that the development of the Volocopter holds significant promise to radically change short distance transportation,” said Erik Lindbergh, grandson of Charles and Anne Morrow Lindbergh. “It has a long development path ahead, but if this innovative design reaches the commercial market it will dramatically change the way we move about the planet.”