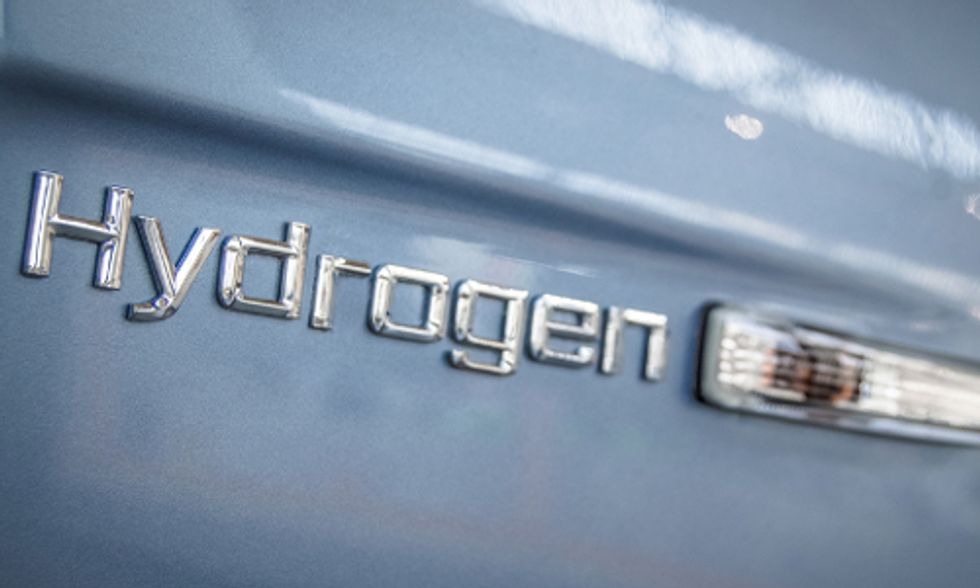 Just as the widespread adoption of electric vehicles (EVs) has begun to seem like a real possibility, the head of Toyota, the world's largest automaker, is already projecting moving beyond that technology.

Toyota president Akio Toyoda said in a lengthy profile in Business Week that the next step is cars powered by hydrogen fuel cells, and he believes Toyota could produce such a mass-market vehicle in the not-unforeseeable future. The company began work on fuel cell development in the early ’90s, but the cost of producing the vehicle was prohibitive at the time—close to  $1 million each. It's since re-engineered the cells and the manufacturing process to make it more economical.

While other companies are jumping into the EV market, expanding their offerings, improving their batteries and looking at ways to extent these vehicles' range, Toyota will be offering its new hydrogen-fueled vehicle, called the Mirai, in Europe and the U.S. by late next year. It's already available in Japan. It costs about $62,000.

"This is not an alternative to a gasoline vehicle,” Scott Samuelsen, an engineer and director of the National Fuel Cell Research Center at the University of California at Irvine told Business Week. “This is a quantum step up.”

Its driving range of 300 miles is a vast improvement on EVs. It emits only heat and water, not greenhouse gases that pollute the atmosphere and drive climate change. And with transportation providing more than 20 percent of the world's greenhouse gases, that's significant.

“The automobile industry can contribute to the sustainable growth of Earth itself,” Akio told Business Week. “At Toyota, we are looking out 50 years and even more decades into the future. I do believe that [the] fuel-cell vehicle is the ultimate environmentally friendly car."

With more than 20,000 electric battery charging stations in the U.S. and only 13 hydrogen filling stations, replacing EVs with fuel cell cars may be far in the future.
Photo credit: Shutterstock

For those living in the present and not 50 years from now, there are drawbacks, as companies invested in bringing EVs to the market are only too willing to point out. While more EV battery-charging stations are popping up around the landscape, especially in forward-looking California, hydrogen fueling stations are vanishingly rare and would require a big investment. The fact that hydrogen cells can fuel in less than five minutes isn't such an advantage if you can't find a place to do it. With only nine public fueling stations and a mere 18 in the pipeline for the next few years in early-adopter California—and 13 nationwide, compared to more than 20,000 electric battery charging stations, and the cost of a hydrogen fill-up about $45, dropping $62,000 into the Mirai sedan might not be such a smart choice for now.

“Its infrastructure is constrained much more than electric vehicles, where you can charge them at home,” Dan Sperling, director of the Institute of Transportation Studies at the University of California at Davis told Business Week.

Not only is charging EV batteries becoming faster, but today Tesla founder Elon Musk announced that his company is working on a battery-swapping system, where a spent battery can be swapped at a charging  station for a fully charged one in less time than it takes to fill a tank with gas, and that it's already beta-testing it in—where else?—California.

Companies with an interest in EVs also dispute Toyota's claim that hydrogen fuel cell cars are better for the environment. Musk has called the fuel cells "fool cells" and said at a news conference in Tokyo a few months ago that since virtually all U.S. hydrogen production comes from burning natural gas, vehicles like the Mirai are “hydrocarbon-burning cars in disguise.”

Akio Toyoda's response: “There’s a high possibility that there will be many sources of hydrogen in the future, such as solar energy and even waste."

Ironically, Toyota's own push into EVs, with its investment in research and development of hybrids, plug-in-electrics and advanced batteries, has helped drive increased acceptance and consumer feasibility of those cars and lured other players into the field.