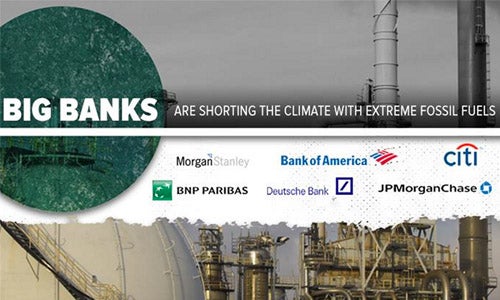 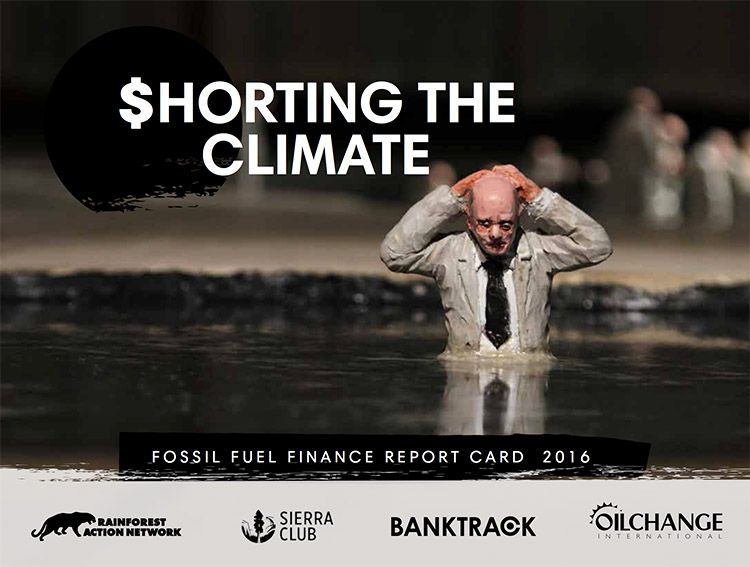 The report card, which also graded banks on their human rights policies, shows that banks performed poorly in all sectors. Levels of exposure were high across the board on the order of tens or hundreds of billions of finance for extreme fuel companies, demonstrating that banks are locking the world onto a path of major climate instability. Grades on policies were also poor, with an overall D average for the report card, showing that a vast majority of banks have no significant policies in place to stop funding extreme fossil fuels.

“In finance terms, ‘short-selling’ or ‘shorting’ is when an investor profits if a company or asset declines in value,” Jason Opeña Disterhoft, senior campaigner with Rainforest Action Network, said. “It means betting on failure. After the Paris agreement, financing extreme fossil fuels amounts to shorting the climate. These bets are also at the expense of some of the most vulnerable communities living in fossil fuel ‘sacrifice zones’ around the world. We need banks to move now to help pivot the economy away from extreme fossil fuels for the sake of the planet and its people.”

At a time when the world’s nations have agreed to limit global warming to 1.5 degrees Celsius to avoid the most catastrophic effects of climate change, leading financial institutions have continued business as usual investment in fossil fuels in direct contradiction of global consensus. In just the past three years, these banks have sunk $42 billion for companies active in coal mining; $154 billion for the 20 largest coal-fired power producers; $306 billion for companies that drill extreme oil; and $282 billion for companies building liquefied natural gas export infrastructure. If governments follow through on the Paris agreement and limit carbon emissions, these investments could likely result in stranded assets and significant losses.

The report card does reflect bank movement on coal mining, where 10 of the biggest U.S. and European banks committed to reduce funding for the coal mining sector in the last year. Based on their ability to quickly switch their stance on coal over the last year alone, banks are capable of making the critical choice to cut out extreme fossil fuel investments. Not only can they do it, it is a critical step to follow through on promises made in Paris to stabilize the climate.

“Many banks announced a move away from coal in the run up to COP21 and after, but most of these focused only on coal mining,” Yann Louvel, BankTrack’s climate and energy coordinator, said. “Our assessment clearly shows that they still have a long way to go to concretely exit this industry and even more for the other extreme fossil fuel sectors. None of these banks can claim to support the Paris agreement, to be aligned with a 2° scenario or to be fighting climate change—as we too often read in their sustainability reports—if they continue to finance these destructive sectors.”