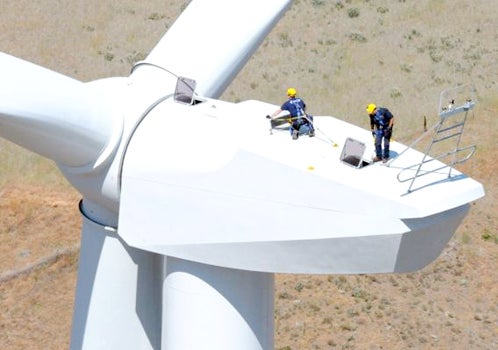 Wind energy developers installed a record 41,000 megawatts of electricity-generating capacity in 2011, bringing the world total to 238,000 megawatts. With more than 80 countries now harnessing the wind, there is enough installed wind power capacity worldwide to meet the residential electricity needs of 380 million people at the European level of consumption. 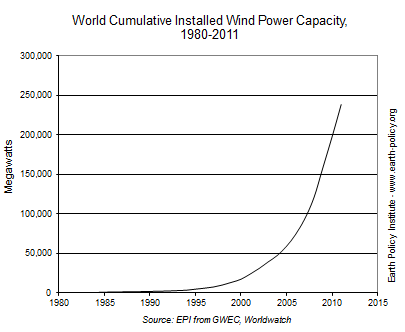 China led all countries in annual wind power gains for the third straight year, installing a jaw-dropping 18,000 megawatts for a total wind capacity of 63,000 megawatts. This country’s rise to the top of the world rankings has been swift—after doubling its wind capacity each year from 2005 to 2009, China surpassed the U.S. in 2010. (See data at www.earth-policy.org.)

China’s ambitious Wind Base program will help ensure a widening lead for some years to come. Across the wind-rich northern provinces, wind mega-complexes of between 10,000 and 38,000 megawatts each are now under construction. By 2020, these “wind bases” will approach 140,000 megawatts of total installed capacity—more than the entire world had at the close of 2008.

As impressive as China’s achievements have been thus far, such rapid growth in capacity has created significant challenges. Badly needed electric grid and transmission upgrades in remote areas lag well behind wind farm completions, meaning that many turbines stand idle. This, combined with growing concerns over the safety and performance of hastily built wind farms, has led regulators to cap the allowed new wind capacity at 15,000–20,000 megawatts per year and to make improved project quality and grid access a priority.

Now trailing well behind China, the U.S. installed 6,800 megawatts of wind generating capacity in 2011. The U.S. wind fleet now totals nearly 47,000 megawatts across 38 states, enough to meet the electricity demand of more than 10 million homes. Another 10,000 megawatts could be on the way in 2012. The outlook for 2013 is not as upbeat, however. If an important tax credit expires at the end of 2012, as scheduled, the industry fears a precipitous drop in new wind capacity. This would put thousands of jobs at risk in what has been a welcome success story in U.S. manufacturing.

Texas, now with 10,400 megawatts installed, has been atop the U.S. wind leaderboard since 2006. Next in line is Iowa, with 4,300 megawatts. In share of electricity generated from wind, Iowa and South Dakota lead at 20 percent each. Texas, home to 25 million people, gets 8 percent of its electricity from wind farms.

As in China, some of the best U.S. wind resources are located in remote areas and require new or upgraded transmission lines to move electricity to population centers. Many long-distance high-voltage transmission projects are under development across the U.S. to help address this, including four projects proposed by Clean Line Energy Partners in the Midwest, South, and West that would transport more than 17,000 megawatts of renewably generated electricity. Clean Line’s “Grain Belt Express,” for example, would allow wind-rich Kansas to export renewable electricity eastward to Missouri, Illinois, and beyond.

India, whose Suzlon has become one of the world’s leading wind turbine manufacturers, installed 3,000 megawatts of wind in 2011. It remains fifth in the world wind rankings, with 16,100 megawatts total, a figure the government hopes to double within five years. Eighteen of India’s 28 states encourage wind energy development through feed-in tariffs. Widely used in Europe, these policy mechanisms require utilities to pay a premium for electricity generated with renewable energy.

Neighboring Pakistan, which just introduced a national feed-in tariff, looks to add more than 1,500 megawatts to its existing 6 megawatts by 2013. Much of this expansion is slated for Sindh province, home to the country’s largest city, Karachi. Overall, Pakistan’s wind capacity potential comes in at 350,000 megawatts—enough to meet its electricity needs 10 times over.

Countries in Latin America, Africa, and the Middle East are also taking advantage of their wind resources. Brazil, which leads the way in the rapidly expanding Latin American market, reached 1,500 megawatts of total wind capacity in 2011, a 63 percent increase over 2010. Wind projects representing another 7,000 megawatts already have customers contracted to purchase their electricity once they go online. In sub-Saharan Africa, the long-awaited 300-megawatt Lake Turkana wind farm is set to break ground in northwestern Kenya in April 2012. Ethiopia brought its first wind farm online in 2011, and both Nigeria and Mauritania are poised to do the same in early 2012. And in the Middle East, Turkey has grown from 20 megawatts of wind in 2005 to 1,800 megawatts in 2011, and it has five times that amount in the pipeline.

The vast majority of wind turbines operating today are on land, but offshore wind development is ramping up. Now totaling more than 4,000 megawatts, almost all of it in Europe, offshore wind generating capacity has grown fivefold since 2006. More than half of the total belongs to the United Kingdom, whose 380-megawatt Greater Gabbard offshore park is already the world’s largest. It will exceed 500 megawatts when complete. The European Wind Energy Association expects the region’s offshore generating capacity to reach 150,000 megawatts by 2030—covering 14 percent of projected EU electricity demand.

The only operational offshore wind farms outside Europe are in Asia. China has installed more than 200 megawatts offshore since 2010, and Japan has built 25 megawatts since 2004. Ambitious near-term goals, if realized, will sharply accelerate offshore expansion—China aims for 5,000 megawatts by 2015 and South Korea plans to have 2,500 megawatts by 2019.

A frequent argument against renewable sources of electricity is that they are much too expensive to compete with nuclear or fossil fuel power plants. In the most suitable locations on land, however, wind is already often cost-competitive. Analysts at Bloomberg New Energy Finance estimate that as wind costs continue to fall, even the average wind farm will be competitive by 2016.

Global wind power capacity is projected to at least double between 2011 and 2016, as mature players build on a sizable base and as more countries enter the market. The race is on to shift from finite and costly fossil fuels to renewables swiftly enough to avoid the disastrous consequences of runaway climate change. With its long list of attractive attributes—widespread and abundant, quick to scale, climate-benign, and zero fuel cost—wind power is driving the transition to a new energy economy.