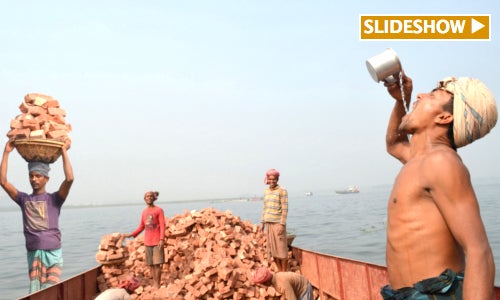 The connection between water and energy represents a tighter link than many people realize.

In developed economies, such as the European Union, thermal and nuclear power plants can consume more than 44 percent of the water supply. Just 8 percent of global energy generation is used for pumping, treating and transporting water to consumers, according to the United Nations. Nearly 1 billion people don’t have access to water around the world.

Those are the sort of figures inspired the UN’s 2014 World Water Day, set for Saturday March 22, 2014. Here are a few photos and graphics from the UN’s Facebook Photo competition that display the joys, fears and hopes associated with the world’s water supply.

According to a UN statement released in advance of a new report, the organization is most concerned about the “bottom billion,” which people who live in slums and in poverty without access to safe drinking water, adequate sanitation and sufficient food and energy. The UN hopes World Water Day gives more attention to this issue and can “facilitate the development of policies and crosscutting frameworks that bridge ministries and sectors, leading the way to energy security and sustainable water use in a green economy.

“Particular attention will be paid to identifying best practices that can make a water- and energy-efficient ‘Green Industry’ a reality.”

Here are some of the UN’s goals for 2014 World Water Day: