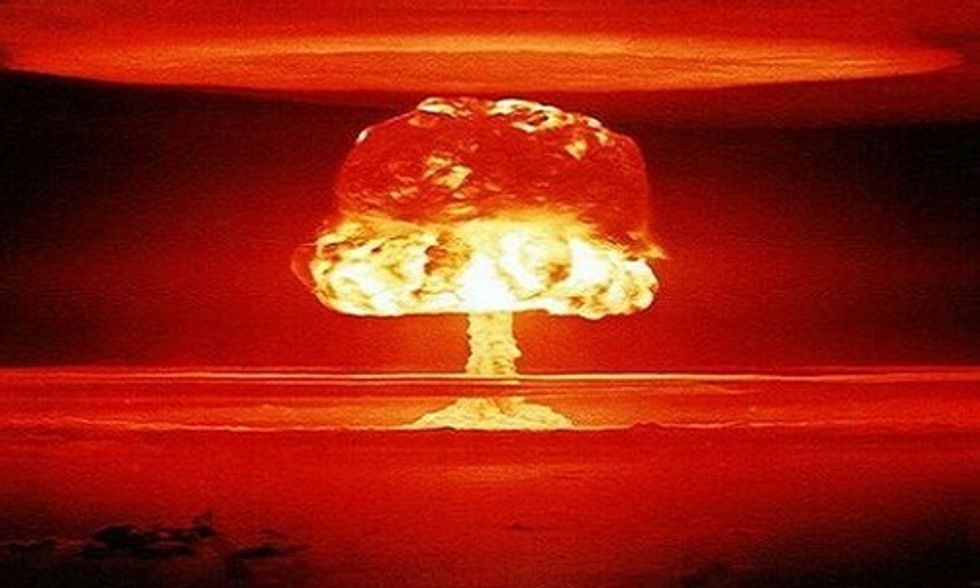 The UK government says that climate change poses risks that demand to be treated as seriously as the threat  of nuclear war.

Climate change poses risks that demand to be treated as seriously as the threat of nuclear war, says a report commissioned by the UK government.

Scientists from the UK, U.S., India and China say in a report commissioned by the UK that deciding what to do about climate change depends on the value we put on human life, both now and in years to come.

One of the lead authors of the report is Sir David King, formerly the UK government’s chief scientist, who last month co-authored a report on the scale of investment that should be made to move from fossil fuels to renewable energy by 2025.

In a foreword to the latest report, Baroness Anelay, a minister at the British foreign office, writes that assessing the risks surrounding nuclear disarmament and non-proliferation means understanding inter-dependent elements—including what science says is possible, what other countries may intend, and systemic factors such as regional power dynamics.

“The risk of climate change demands a similarly holistic assessment,” she says.

She concludes: “How much do we care about the effects of climate change? How important is it that we act to avoid them? What probability of their occurrence can we tolerate? … The answers to these questions depend in part on how we value human life—both now, and in the future.”

The report is not the first to put climate chaos and nuclear devastation in the same category of risk, but its sponsorship by one of the world’s nuclear powers is eloquent.

It says the most important political decision is how much effort to exert on countering climate change, taking into account what we are doing to the climate, how it may respond, what that could do to us, and what we might then do to each other.

The authors’ best guess, based on current policies and trends, is that greenhouse gas emissions will keep going up for another few decades, and then either level off or slowly decline.

This, they say, is for two reasons: governments are not making maximum use of the technologies already available; and technology is not yet progressing fast enough to give governments the policy options they will need. In the worst case, emissions could keep on rising throughout the century.

They warn that how the climate may change, and what that could do to us, are both highly uncertain. “The important thing to understand is that uncertainty is not our friend,” the report says. “There is much more scope to be unlucky than there is to be lucky.”

The report foresees wide ranges of possible global temperature and sea level increase. On a high emissions pathway, it says, where the most likely temperature rise is estimated at 5°C by 2100, anything from 3°C to 7°C may be possible.

On this pathway, the chances of staying below 3°C will become “vanishingly small,” but the chances of exceeding 7°C will increase and could become more likely than not within the next century.

The authors see very little chance that global sea level rise will slow down, and every chance that it will accelerate. The only question is by how much.

“While an increase of somewhere between 40cm and 1m looks likely this century, the delayed response of huge ice-sheets to warming means we may already be committed to more than 10m over the longer term. We just do not know whether that will take centuries or millennia.”

A temperature increase of 4°C or more could pose very large risks to global food security, and to people.

Humans have limited tolerance for combinations of high temperature and humidity. Their upper limits of tolerance are rarely if ever exceeded by climatic conditions alone, but with temperature increase somewhere between 5°C and 7°C, it starts to become likely that hot places will experience conditions that are fatal even for people lying down in the shade.

Population growth alone is also likely to double the number of people living below a threshold of extreme water shortage by mid-century.

Coastal cities, according to the report, probably have thresholds in terms of the rate and extent of sea level rise that they can deal with, but we have very little idea where those thresholds are.

The authors say that even the 0.8°C of climate change experienced so far is now causing us significant problems, and that “it seems likely that high degrees of climate change would pose enormous risks to national and international security”—for example, through extreme water stress and competition for productive land.

In a highly topical passage, they say migration from some regions may become more a necessity than a choice, and could happen on a historically unprecedented scale.

“The capacity of the international community for humanitarian assistance, already at full stretch, could easily be overwhelmed,” the report warns.

The risks of state failure could rise significantly, affecting many countries simultaneously, and even threatening those currently considered developed and stable.

But the report is not relentlessly downbeat. “An honest assessment of risk is no reason for fatalism,” it says. “Just as small changes in climate can have very large effects, the same can be true for changes in government policy, technological capability, and financial regulation … the goal of preserving a safe climate for the future need not be beyond our reach.”