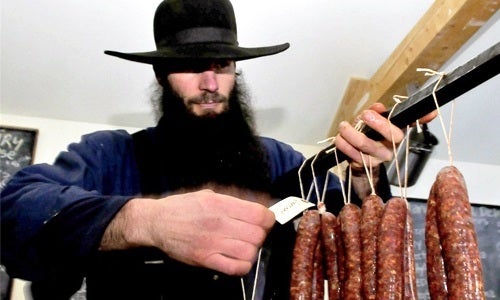 Chef Matthew Secich is well known by foodies for his stints at such critically acclaimed restaurants as Charlie Trotter’s in Chicago, The Oval Room in Washington, DC and the Alpenhof Lodge in Jackson Hole, Wyoming.

But Secich recently made a major lifestyle change, NPR’s The Salt reported. He moved to Unity, Maine, joined an Amish community and took his latest dining venture, Charcuterie, off-grid.

Before making the move to Unity (population 2,000), Secich built up an impressive resumé. He studied cuisine at Johnson and Wales University before traveling to France to study culinary techniques there. He even learned how to cook an omelet from Julia Child herself at the Inn at Little Washington in Virginia, NPR said.

“I thought I was on top of the world, and I had the best job that you could have working for one of the best restaurants in the world,” Secich said. But he wasn’t happy. He said that something was missing.

“He didn’t find what he was looking for until he adopted a traditionalist Christian faith and started to homestead,” NPR explained. “Happiness now,” he said, “is living off the grid, Amish.”

Listen to NPR’s The Salt here: