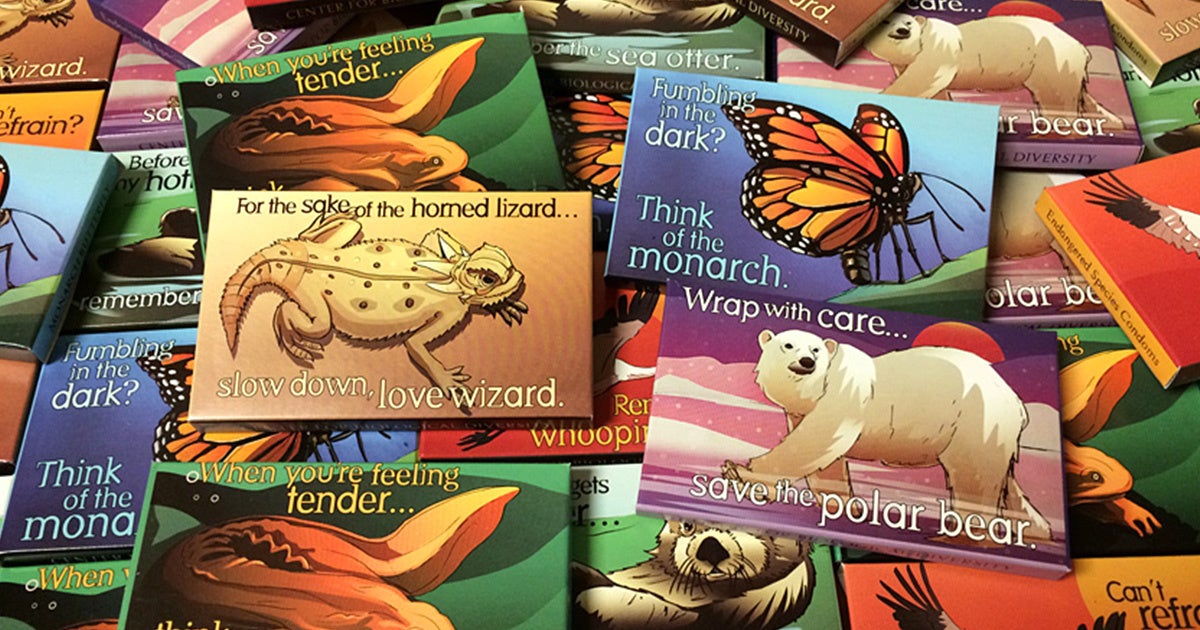 U.S. senators returning from their holiday break Monday received a package of Endangered Species Condoms to mark World Population Day, July 11, and to urge them to protect reproductive rights and family planning programs. The delivery is part of the Center for Biological Diversity’s project to raise awareness about human population growth and its effects on wildlife. In all, 600 condoms were sent to the Senate.

Every senator received a package of the brightly colored condom boxes featuring images of species threatened by human population growth and slogans like “Wrap with care, save the polar bear” and “Fumbling in the dark? Think of the monarch.” The senators also received a letter with the condoms either thanking them for their support of reproductive healthcare and access to contraception or criticizing them for prioritizing tax cuts for the rich over women’s rights and the environment.

“Access to reproductive healthcare is a right all women should have. It’s also an essential tool in curbing human population growth so we can save room for the wildlife who share the planet with us,” said Leigh Moyer, the Center for Biological Diversity’s population organizer. “We need to draw the connection between human population growth and the wildlife extinction crisis, but that’s not enough. We also need to protect straightforward solutions like universal access to contraception for everyone on Earth, starting right here in the United States.”

Human population continues to grow at a rate of about 227,000 people per day, driving habitat loss and forcing competition for natural resources. Wild plants and animals are going extinct at rates 1,000 to 10,000 times the natural background rate due to habitat loss, pollution, climate change and other human-caused problems. The UN recently updated population projections to 9.8 billion people by 2050, an increase of 100 million from the prediction made two years ago.

“We’re at a pivotal moment in history. As Congress works to address American healthcare, we have the opportunity to put the pieces of the puzzle together,” said Moyer. “We can’t afford for our senators to miss this opportunity and vote against the American people and against the environment.”

World Population Day was designated by the United Nations in 1989 to raise awareness about global population issues. There are more than 7.5 billion people on the planet, with the U.S. ranked as the third-most populous country. And with 45 percent of all pregnancies unplanned, the U.S. also boasts the highest rate of unintended pregnancies of any developed nation.

The Center for Biological Diversity’s population and sustainability program advocates for rights-based, common-sense solutions, including universal access to contraception, reproductive healthcare and family planning services, education and equality for women and girls, and reducing our environmental footprint.