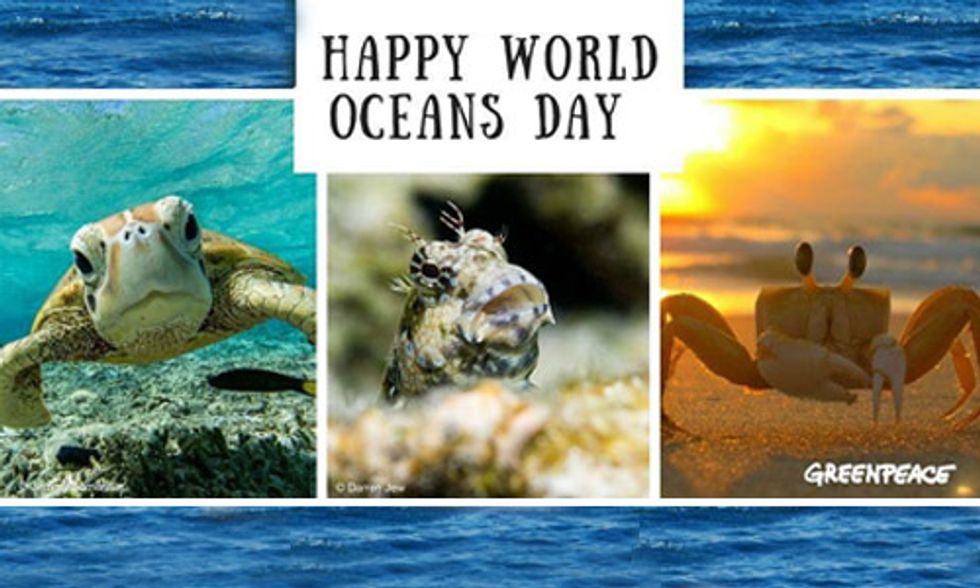 June 8 marks World Oceans Day, but what if we celebrated oceans every day? Covering more than 70 percent of Earth's surface, oceans, more than anything, define our small blue planet. We should celebrate their complex and vibrant ecosystems, life-sustaining services, calming effects and unimaginable diversity, much of which we have not yet even discovered.

Summer is an especially rich time for ocean life. As days grow longer here in the northern hemisphere, abundance builds from the microscopic level as photosynthesis triggers phytoplankton to bloom, providing food for zooplankton such as krill. Krill then feed small fish like herring and sand lance, which in turn feed larger fish, dolphins and whales. This marine food web relies on a scale of unfathomable interconnectedness—yet it's easily disrupted.

The news for oceans hasn't been good lately and that worries Canadians. It's not just coastal communities that are defined and affected by oceans. Canada has the longest coastline in the world and people throughout Canada want the seas and all the marine life they support, to be healthy.

Fortunately, solutions to many ocean woes are within our grasp, although governments have been frustratingly slow to act over the past decade. Canada could protect marine areas, restore protective laws, conserve wild salmon and control open net-pen fish farms.

Our country's commitment to protect 10 percent of its marine environment by 2020 is a good start, but if we followed countries like Australia and the U.S, we'd aim higher. Canada could act to transform its reputation from laggard to leader on marine protection, plan for ocean management with an understanding of how ecosystems work and incorporate traditional Indigenous knowledge to give wildlife a chance to thrive.

Pacific salmon, crucial to West Coast ecosystems, are especially in need of protection, but their numbers continue to decline. Few natural events are as dramatic and moving as millions of salmon returning from the oceans to spawn in streams, rivers and lakes. Driven by the imperative to reach spawning beds before their genetically programmed deaths, salmon fight past predators, hooks, nets and pollution, retaining the power to leap river barriers shortly before their lives end. Bears, eagles and other wildlife feed on the salmon, leaving their nitrogen-rich wastes to fertilize the magnificent coastal rainforests.

For almost 40 years, Canadian laws protected fish such as salmon and the water bodies where they live and spawn. The Fisheries Act was one legal tool to protect lakes and rivers, which offer benefits such as clean drinking water to nearby communities. But the federal government removed habitat protections from the act in 2012. Fish that aren't part of a defined, often commercial, fishery will remain vulnerable until protection is reinstated.

We still have much to learn about wild salmon, but we can take some practical steps to support them. A lot of time and money, about $37 million, was spent on one of the most comprehensive reviews of Pacific salmon management ever undertaken. It's been four years since BC Supreme Court Justice Bruce Cohen completed his Inquiry into the Decline of Sockeye Salmon in the Fraser River, yet few of his recommendations have been implemented. Fish biologists say that Canada's Wild Salmon Policy, adopted in 2005, also offers good management measures, but it isn't being followed either.

Salmon face other threats. Concerns over disease spread from salmon farms to wild salmon were heightened recently with the discovery of a new pathogen in farmed salmon. The virus connected to this disease plagues Norway's farmed salmon and is now common in penned Atlantic salmon and wild fish near BC fish farms.

Salmon are often indicators of the overall health of the ecosystems in which they live. When marine ecosystems are healthy, they provide food, jobs, recreation and culture. They are foundational life forces for whales, bears, eagles, forests and humans. We should celebrate their life-giving capacity by treating them with respect—not just on World Oceans Day, but every day!

Sending Out an S.O.S.: It's Time to Save Ourselves