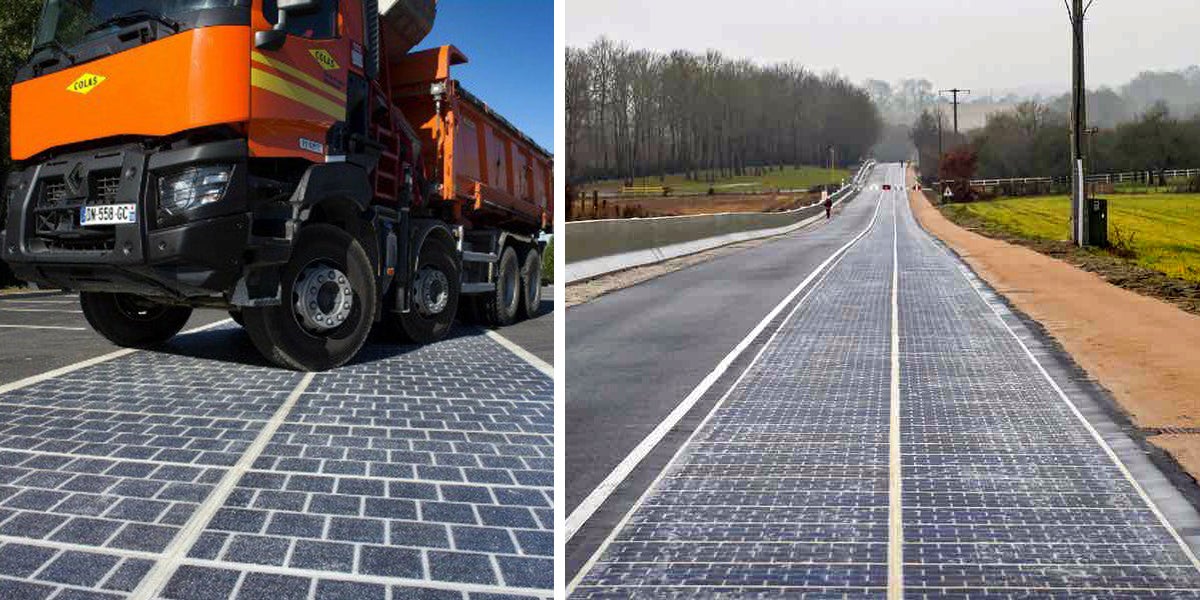 A small village in France is now home to the world’s first solar road, aka Wattway. French Ecology Minister Ségolène Royal officially inaugurated the 1 kilometer-long road covered with 2,800-square-meters of resin-encased panels in Tourouvre-au-Perche in Normandy on Thursday.

The French Ministry of the Environment invested €5 million ($5.2 million) to build the project engineered by French road construction company Colas.

According to the Guardian, about 2,000 motorists will drive on the roadway during a test period of two years to see if the project can generate enough energy to power street lights for the 3,400-resident village. The panels consists of extremely thin yet durable panels of polycrystalline silicon that can transform solar energy into electricity.

The panels are designed to withstand all types of traffic, including heavy-duty vehicles and in terms of efficiency, Wattway claims its panels have a 15 percent yield, compared to 18-19 percent for conventional photovoltaic panels.

The French government plans to eventually pave 1,000 kilometers (621 miles) of its roads with solar panels.

“The maximum effect of the program, if successful, could be to furnish 5 million people with electricity, or about 8 percent of the French population,” Royal said earlier this year about the iniative.

Colas, however, said that expenses will eventually lessen as the technology is adopted elsewhere in the world, including an experimental site that launched earlier this month in the U.S. The site consists of of 50 square meters of Wattway solar panels installed at the Georgia Visitor Information Center in West Point, Georgia.

“There is no need to rebuild infrastructure,” Le Bouc said. “At Chambéry and Grenoble, was tested successfully on Wattway a cycle of 1 million vehicles, or 20 years of normal traffic a road, and the surface does not move.”

Royal added, “It takes advantage of large swathes of road infrastructure already in use … to produce electricity without taking up new real estate.”

The solar roads concept is not new. EcoWatch has previously featured a similar Idaho-based project, Solar Roadways, whose Indiegogo campaign became extremely successful when their video went viral in 2014. Also, a solar bike path in the Netherlands called SolaRoad has been in operation since November 2014.

While solar roads have its detractors, the technology has been touted as an efficient way to harness the sun’s energy while taking advantage of the world’s expansive roadway network.

“Roads spend 90 percent of their time just looking up into the sky. When the sun shines, they are of course exposed to its rays,” Jean-Lic Gautier, manager of the Center for Expertise at the Colas Campus for Science and Techniques, said in a statement last year. “It’s an ideal surface area for energy applications.”