The World Cup of Climate Change 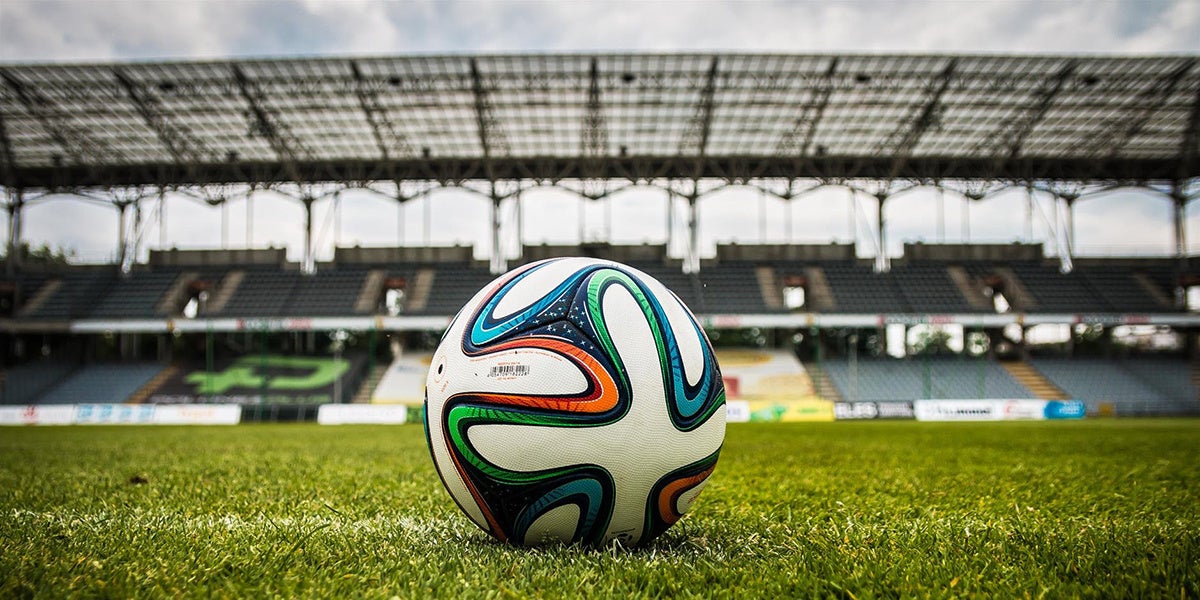 By Tan Copsey and Bridgette Burkholder

The World Cup starts today, when billions of people around the world are expected to tune in to the greatest show on Earth. Everyone from economists to an octopus (RIP) have tried to predict who will win. Germany, Brazil and Spain are early favorites to take the cup. But we wanted to know, which countries are tackling climate change, kicking out fossil fuels and trying to score a better future? We set out to bracket our predicted winners accordingly.

Working this out is harder than it sounds. How do you judge what makes a champ? One way is simply to look at the greenhouse gas emissions people in each country produce. So we ran the numbers. Nigeria has the best shirts in the tournament, as well as one of the cooler songs, and they are also the per-capita-emissions champions, contributing a tiny 0.55 metric tons GHG per person, according to the World Bank.

But, like all World Cup winners, their route to victory included some controversy. They beat Senegal, a West African nation with similarly low emissions, in the semi-final. But energy wonks and Senegalese fans could point to the fact that Nigeria is a major oil exporter and most of the emissions associated with that oil are not included here. Costa Rica, who Nigeria beats in this low-emissions final, is the first and only country in the world that has said it will ban fossil fuels entirely. Some may call foul on declaring Nigeria the victor. 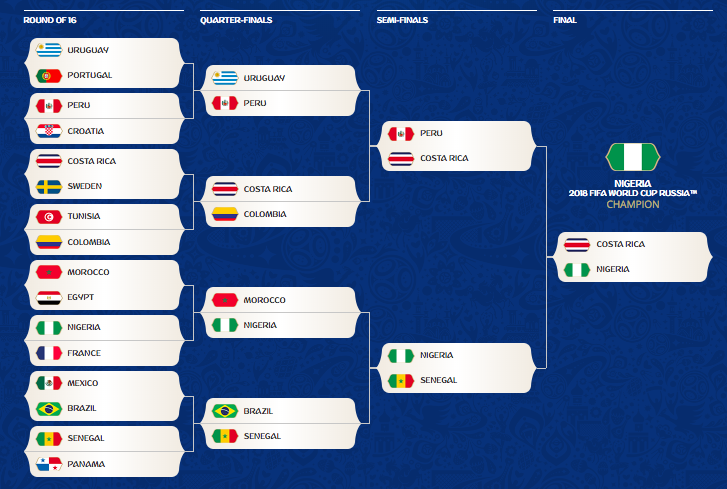 Our prediction for the per capita emissions champion.

Are per capita emissions the best measure of whether a country is really a climate champion? To decarbonize the economy while improving living standards, deployment of renewable energy may ultimately be more important. So we ran our brackets again, this time using International Renewable Energy Agency stats.

Traditional powerhouses Spain, Germany and Brazil, who have 10 titles between them, all made the semi-finals. Correlation does not equal causation, but deploying more renewable energy is clearly something other nations should get on to immediately. Brazil’s victory owes more to a reliance on hydropower than Neymar, but as with the team itself, there are some pleasing signs of diversification away from a single source of energy or goals. 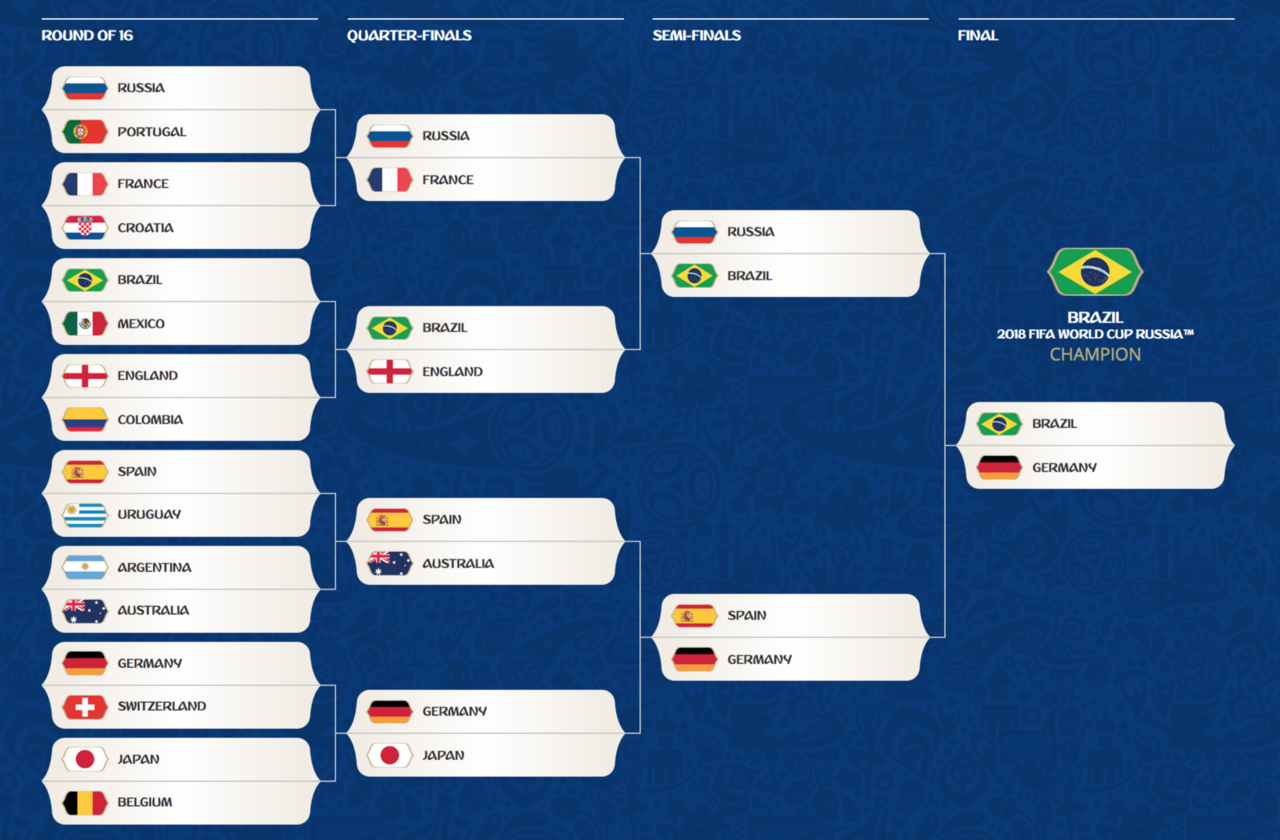 Our prediction for the energy efficiency champion.

The agony suffered by American soccer fans, who saw their team miss out on qualification, will be compounded by the fact that this is one World Cup they could have won. The U.S. has deployed more renewable energy than any of the other nations competing this year. Only China has better stats, and the Chinese have only ever qualified for one World Cup.

Fighting climate change isn’t just about greenhouse gas emissions or renewable energy. In soccer, you have to defend as well as attack. The same goes for climate change. We’ve already seen global temperatures increase by about 1° C since the 1880s, and even with serious action, we’re going to see the impacts of climate change increase as well. So who’s best prepared for climate change? We used data from ND-Gain to find out.

Unfortunately, our per capita emissions champions were immediately eliminated, along with every African nation present, which should be a wake up call for some of the richer nations at the tournament, who are supposed to be financing efforts to adapt. Instead, the adaptation World Cup is dominated by small, rich European nations. And even then, it’s a pretty low scoring affair, most nations simply aren’t ready for climate change. 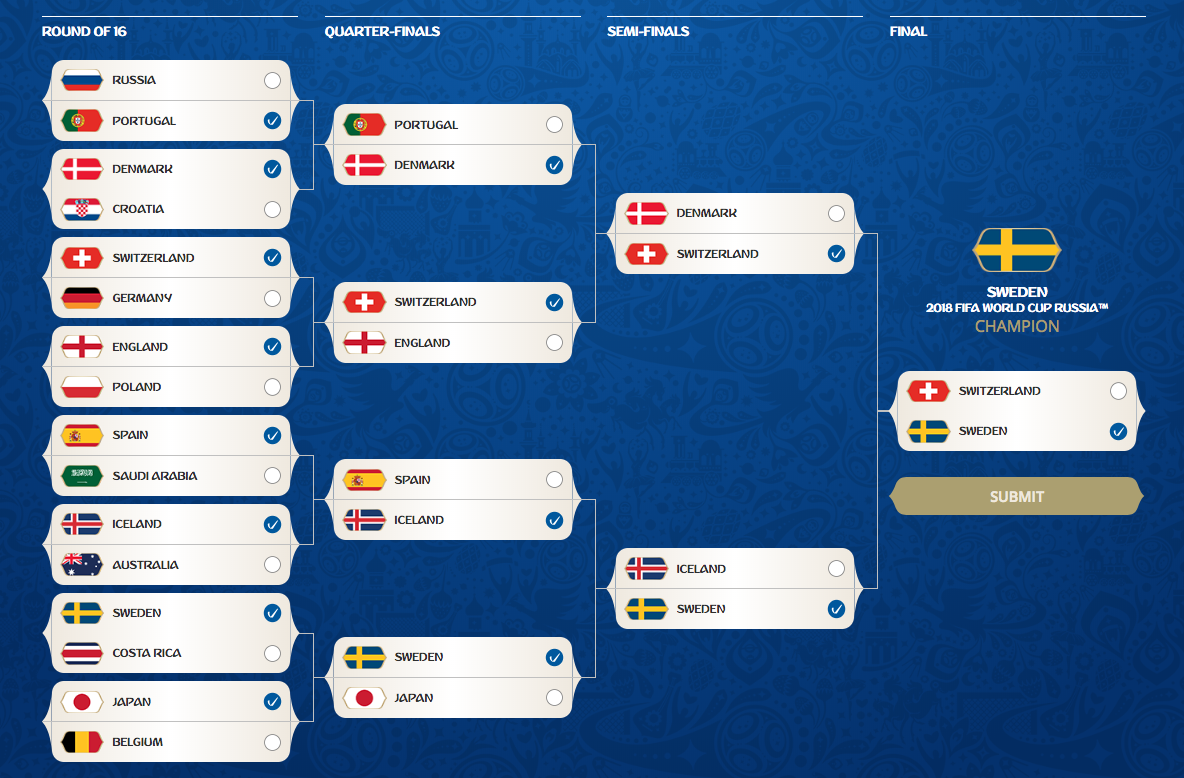 Our prediction for the most climate-prepared champion.

On top of this worrying news, the next World Cup is scheduled to take place in Qatar. A nation of scorching desert temperatures, and the highest per capita emissions in the world. Qatar has a lot of work to do if it wants to be a World Cup climate champion.