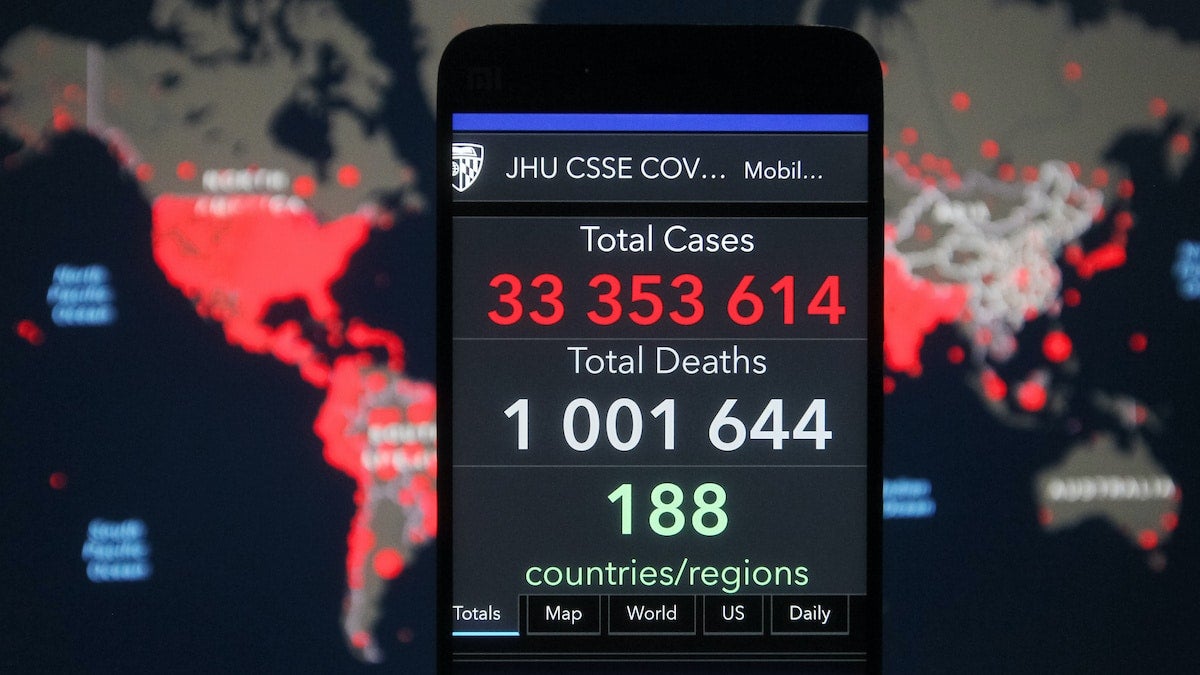 A photo illustration shows confirmed global cases and deaths from COVID-19 displayed on a smartphone and PC screen, according to the Johns Hopkins Coronavirus Resource Center on Sept. 29, 2020. Pavlo Gonchar / SOPA Images / LightRocket via Getty Images

The Johns Hopkins University tracker for worldwide coronavirus cases showed that the world passed a grim milestone early Tuesday morning, as more than 1 million have died from the virus and the infection it causes, COVID-19.

That’s equivalent to almost the entire population of San Jose, California. It’s a larger number than the population of Boston, Seattle, Portland and nearly twice the population of Atlanta. In comparison to diseases, COVID-19 in just nine months has killed more people than HIV and dysentery, as The New York Times reported. It has also killed more than cholera, flu, measles and malaria combined. It’s reached every corner of the globe, affecting every country in the world.

“This is a very serious global event, and a lot of people were going to get sick and many of them were going to die, but it did not need to be nearly this bad,” said Tom Inglesby, the director of the Johns Hopkins Center for Health Security, as The New York Times reported.

In addition to the 1 million global deaths, the virus has infected nearly 33.5 million people. Many of the survivors never fully recover and end up with lingering effects that affect their lungs, joints, muscles and mental acuity. Those continued symptoms hamper their ability to return to normal life, according to another report in The New York Times.

The U.S. accounts for 20 percent of the global deaths, by far the largest number of deaths, with more than 205,000 COVID-19 fatalities. The Johns Hopkins data shows that just four countries — the U.S., Brazil, India and Mexico — make up more than half the total of worldwide deaths, according to CNN.

India is quickly catching up to the U.S. as the virus’s transmission is accelerating there. As for the U.S., the numbers are continuing to climb as only 19 states are holding steady. CNN reported that 21 states recorded a higher number of cases in the past week compared to the previous week.

“It’s not only that the number of infections keeps on going up. It’s also that the test positivity rates are trending in the wrong direction,” said emergency medicine physician Dr. Leana Wen to CNN.

“We’re seeing more than a dozen states with a test positivity … over 10%. And there are two states — Idaho and South Dakota — where the test positivity is over 20 percent,” she added. “That means that not only do we have increasing infections in these states, we also don’t have nearly enough testing.”

For context, the World Health Organization (WHO) recommended that an area that wants to reopen businesses should have the number of positive cases at 5 percent or lower for 14 consecutive days, according to Johns Hopkins.

Officials from the WHO believe the actual number of cases and deaths is underreported.

“If anything, the numbers currently reported probably represent an underestimate of those individuals who have either contracted COVID-19 or died as a cause of it,” said Mike Ryan, the WHO’s top emergencies expert, told a briefing in Geneva, as The Guardian reported.

“When you count anything, you can’t count it perfectly but I can assure you that the current numbers are likely an underestimate of the true toll of COVID.”

Secretary General of the United Nations António Guterres called the 1 million deaths threshold agonizing and suggested the world learn from its mistakes.