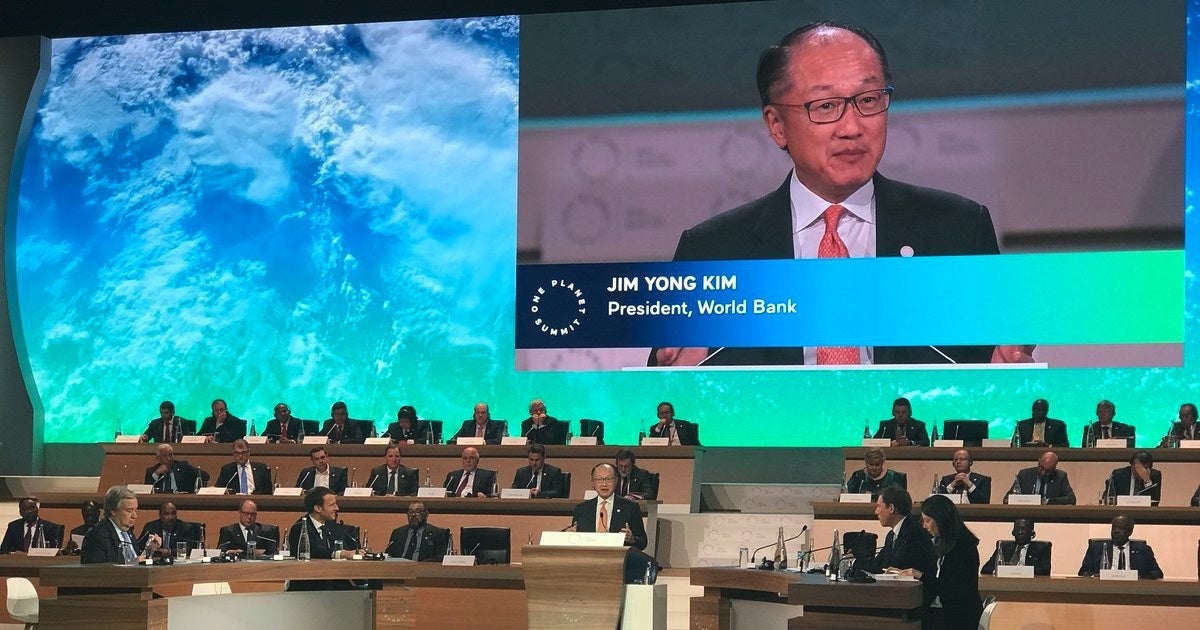 In effort to bolster a global shift to
clean energy, the World Bank—which provides financial, advisory and technical support to developing countries—announced it will “no longer finance upstream oil and gas, after 2019.”

The announcement was made Tuesday at the international
One Planet climate summit called by French President Emmanuel Macron, President of the World Bank Group Jim Yong Kim, and United Nations Secretary-General António Guterres.

The World Bank’s plan to stop financing oil and gas exploration and extraction is aimed at helping countries meet their emissions reduction pledges made at the
2015 Paris climate talks.

The bank noted in a statement that “in exceptional circumstances, consideration will be given to financing upstream gas in the poorest countries where there is a clear benefit in terms of energy access for the poor and the project fits within the countries’ Paris Agreement commitments.”

The bank announced other measures that include reporting greenhouse gas emissions from the investment projects it finances in key emissions-producing sectors, such as energy, starting next year. It is also on track to meet its target of 28 percent of its lending going to climate action by 2020 and to meeting the goals of its Climate Change Action Plan that was developed after the Paris accord.

To align our support to countries seeking to meet their Paris Agreement goals, we announced today that we will no longer finance upstream oil and gas after 2019. Our statement: https://t.co/uSGZjZiQKM #OnePlanet pic.twitter.com/4M7nPXliVN

Oil Change International recently released its Dirty Dozen briefing on how public finance drives the climate crisis through oil, gas, and coal expansion. According to the group, on average, public finance institutions controlled by G20 governments, along with multilateral development banks such as the World Bank Group, provide $71.8 billion per year in public finance for fossil fuels, and only $18.7 billion in public finance for clean energy.

“It is hard to overstate the significance of this historic announcement by the World Bank. Environmental, human rights, and development campaigners have been amplifying the voices of frontline communities for decades in calling for an end to World Bank financing of upstream oil and gas projects,” Kretzmann said.

“Today the World Bank has raised the bar for climate leadership by recognizing the simple yet inconvenient truth that achieving the Paris Agreement’s climate goals requires an end to the expansion of the fossil fuel industry.”

Countries that lead shift away from fossil fuels will reap the greatest economic & environmental benefits for this #OnePlanet https://t.co/zFc4QeqRIl #BeatPollution #OnePlanetSummit pic.twitter.com/FfEwCcqT8Z

“It is important to note that midstream and downstream oil and gas finance are also major contributors to climate change, and must be addressed to remain within the climate limits established by the Paris Agreement,” Doukas said.

World leaders, celebrities and other high-profile figures descended at the One Planet Summit in Paris on Tuesday.

The conference, held on the second anniversary of the landmark Paris climate agreement, is focused on how those working in public and private finance can help the fight against global warming.

Notably,
President Donald Trump—who intends to withdraw the U.S. from the Paris agreement—was not invited to the meeting.

As DW reported, United Nations climate change envoy and former New York City Mayor Michael Bloomberg said during the summit that Trump’s decision to exit the Paris accord was a “rallying cry” for environmentalists. Bloomberg promised U.S. cities, regions and companies would ensure the country met its carbon reduction goals.

Tonight, we’re joined by world leaders committed to taking collective action on climate change ahead of the #OnePlanetSummit. Thank you to tonight’s co-host President @EmmanuelMacron for organizing the summit – and for all his leadership on climate change. pic.twitter.com/qrHjyz6iMc

Here are some other initiatives announced at the One Planet Summit, per the
Associated Press:

Thank you @antonioguterres, @JimYongKim for co-organizing this unprecedented Summit on climate action.
More than statements, this #OnePlanetSummit is all about mobilizing everyone to lead concrete game-changing actions. #OnePlanet pic.twitter.com/pVuWrZm1P9