Can We Work Less and Save the Planet, Too? 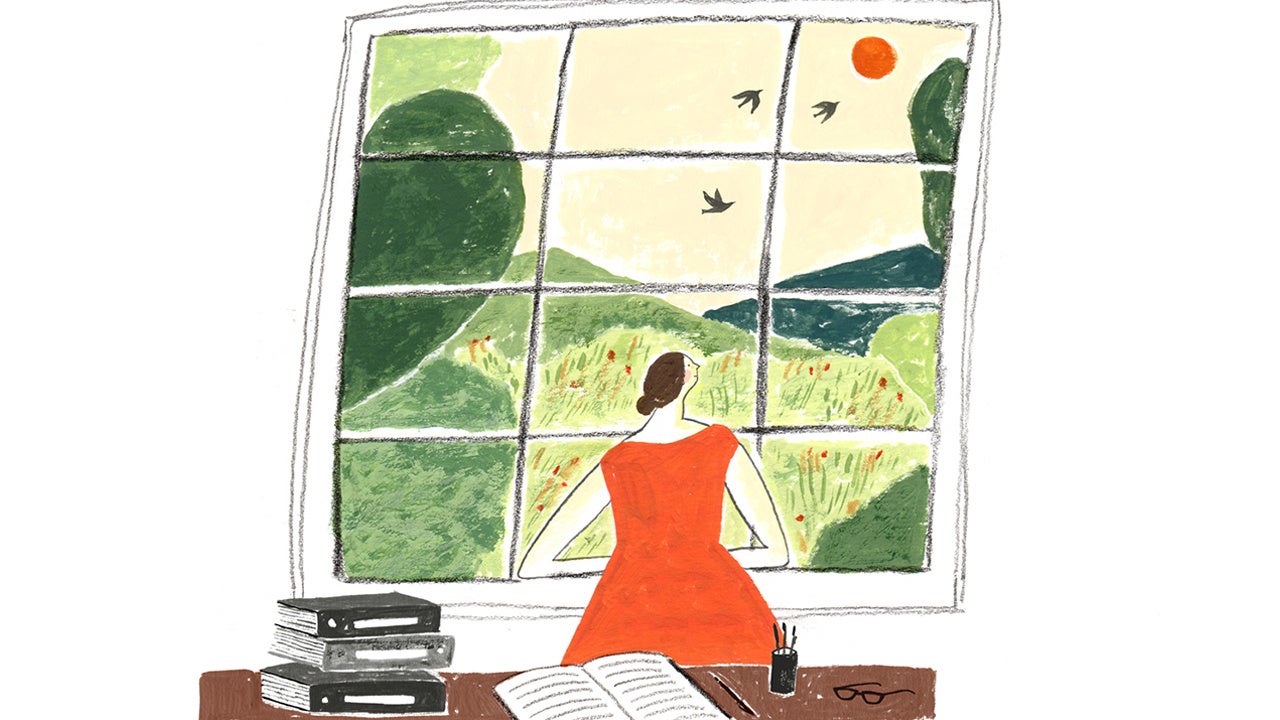 This isn't the only world that's possible. YES! illustration by Fran Murphy

In 2008, performance artist Pilvi Takala took her seat as a new employee at the company Deloitte, a global consulting firm, and began to stare into space. When asked by other employees what she was doing, she said, “brain work” or that she was working “on her thesis.” One day she rode the elevator up and down the entire workday. When asked where she was going, she said nowhere.

This image of utter inactivity, writes Jenny Odell in her book How to Do Nothing: Resisting the Attention Economy, is what completely “galled” Takala’s coworkers.

In capitalist American culture, productivity is sacrosanct. If somebody says they had a productive day, the implicit assumption is that they had a good day. Descriptions like “non-contributing member of society” and “loiterer” clearly stigmatize those who aren’t considered productive.

For Odell, this stigma on unproductivity is a real problem. What we really need is to loiter more, do less — in fact, she seems to say, life on this planet might depend on it.

For years, my work as a journalist has centered on the climate crisis, the displacement of people, and the proliferation of segregating, militarized borders around the world. I’ve seen the ways that the hyperproductivity that drives capitalism helped create these problems.

According to the Carbon Dioxide Information Analysis Center, human industry has pumped more than 400 billion metric tons of carbon dioxide — the approximate equivalent of 1.2 million Empire State Buildings — into the atmosphere since 1751, half of that since the late 1980s. The use of solid and liquid fossil fuels, like oil or coal, produced three-quarters of these emissions. That Western modern civilization was going to uplift the masses was rarely questioned, even as factories continued to pump out plastic commodities on the backs of the global poor.

Now the catastrophic results of elite injustice, corporate lies and collective thoughtlessness are coming in: the hottest years on record, encroaching seas, destructive floods, devastating wildfires, powerful hurricanes, crop-wilting droughts — and 1 million animal and plant species on the verge of extinction, according to a UN report. All of this is displacing people by the millions across the globe.

I remember seeing the production quotas in the workers’ stations in maquiladoras across northern Mexico. Between 2001 and 2004, I visited dozens of such factories as part of the work I did for the binational organization BorderLinks, a nonprofit that arranges educational delegations for universities and churches. Workers, often in windowless rooms with a chemical stench, make suitcases, bank pens, dentures, cotton swabs and electrical components for rockets and fighter jets. People are “optimized” for productivity in a global economy in which progress is measured by constant growth, more stuff and more box stores.

I’ve seen the paychecks. The approximately a day earned by a line worker is hardly a living wage when the combined cost of a gallon of milk and carton of eggs is more than a half-day’s work. And every minute counts: If a worker is a minute late in many maquilas, they lose their on-time bonus (their paycheck is docked). If a worker is pregnant, they’re fired. Workers often live in homes first built with discarded wood pallets and cardboard as insulation, structures that are extremely vulnerable to ever worse and more frequent 21st-century storms. And the inequality is as ferocious as the weather. According to Oxfam, a top fashion CEO has to work just four days to earn what a Bangladeshi garment worker will earn their whole life.

While there are other outcomes of Western progress and economic productivity, inequality — especially along racial and gender lines — and emissions lead the charge. At the end of 2018, 26 people owned about the same amount of wealth as the 3.8 billion poorest people on planet Earth, according to Oxfam; and emissions reached, yet again, an all-time high.

Increasingly militarized political borders reinforce the discrepancies between the haves and the have-nots, the environmentally protected and the environmentally exposed, and those who are White and those who are Black and Brown. When the Berlin wall fell in 1989, there were 15 border walls. Now there are 70, most constructed since 2001, almost always situated on the boundaries of inequality, between the Global North and the Global South.

This isn’t the only world that’s possible. But Odell suggests that imagining something else will require first reexamining — and dismantling — the cultural ethos of productivity that creeps into our lives every day.

By doing nothing, people like Takala are “refusing or subverting an unspoken custom,” Odell writes, revealing “its often-fragile contours. For a moment, the custom is shown to be not the horizon of possibility, but rather a tiny island in a sea of unexamined alternatives.”

It’s such a simple idea, but it’s entirely radical. The strip malls and big box stores and endless cars coming and going; the constant consumption and ever accelerating emissions; our nervous systems attached to constantly buzzing smartphones; and the cyberscapes that displace landscapes in our imaginations — none of this is inevitable. Our current model of productivity and capitalism — and profit and segregation — isn’t the only way.

It is possible to create something else, but mental space is needed to dream up new possibilities. Doing nothing creates that space, and shifts attention to other ways of living, loving and working alongside others.

One radical alternative is imagined in a recent study, “The Ecological Limitations of Work“: a less than 10-hour work week. Study author Philipp Frey argues for a dramatically reduced work week for environmental reasons. Work — or “the economic activity that causes GHG emissions” — is at an unsustainable level, requiring a dramatic reduction.

This idea raises all kinds of questions. Is there a way to both work less and redistribute wealth more evenly? And what is work, even — is it merely that which contributes to a bloated and catastrophic world economy? Perhaps our very salvation, and slowing down, is in the words of the Lebanese poet Khalil Gibran, who wrote, “What is it to work with love? It is to weave the cloth with threads drawn from your heart, even as if your beloved were to wear that cloth.”

And what about borders? Near the end of the book, Odell describes the 1872 painting “American Progress” by John Gast. The painting depicts Manifest Destiny, the idea that White people moving west were a civilizing force. In the painting, a blond woman in white robes strides westward, trampling “hundreds of species and thousands of years’ worth of knowledge,” Odell writes. This westward expansion was the origin of U.S. territorial borders.

So Odell imagines the opposite of Manifest Destiny. She calls it “Manifest Dismantling.”

The same could be said about the 70 border walls, or the nearly 700 miles of walls and barriers along the U.S.–Mexico border. Dismantling these would allow people to move without fear. The saguaros and mesquite in the Sonoran Desert would grow back, and pronghorns, jaguars, and gray wolves could travel freely across borders. But it would also open space for a new vision to emerge, of a more equitable way to relate with each other and the living planet.