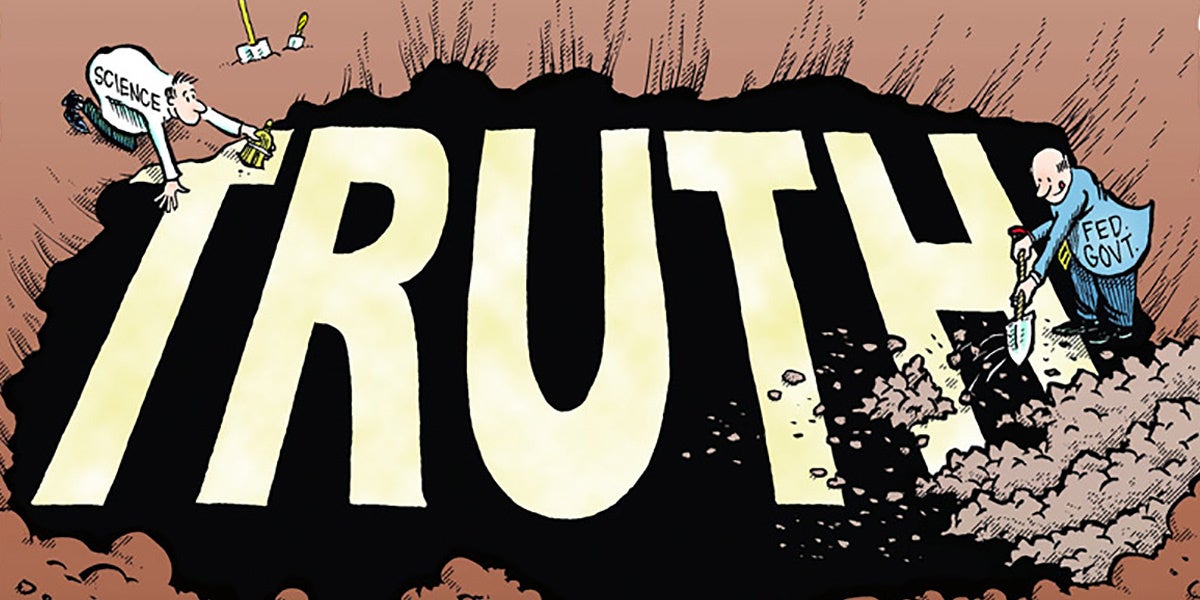 A word ban extends beyond the Centers for Disease Control and Prevention (CDC), the Washington Post reported last night, including at another, unnamed U.S. Department of Health and Human Services (HHS) agency that was told how to talk about the Affordable Care Act, presumably to discourage people from signing up for health care. The directive came from the White House Office of Management and Budget, which coordinates the president’s budget proposal and rule-making agenda.

On Friday, the Washington Post broke the news, and other outlets confirmed, that CDC officials were prevented from referring to seven words when putting together the agency’s budget: vulnerable, entitlement, diversity, transgender, fetus, evidence-based and science-based.

If only the banning of “science-based” and “diversity” was the worst thing the Trump administration has done to science.

Additional terminology guidance given to the State Department suggests that the administration intends to pull funding from science-based HIV/AIDS prevention initiatives that work to promote abstinence-only programs instead, even though peer-reviewed research consistently finds that abstinence-only programs do not delay sexual activity or change other sexual risk behaviors.

The CDC word ban was widely repudiated by scientists, senators and public health advocates. The issue has attracted enormous attention—even from Cher—as emblematic of a morally, scientifically and ethically corrupt style of governing.

In an email to staff last night, CDC Director Brenda Fitzgerald said that the CDC “remains committed to our public health mission as a science and evidence based institution…science is and will remain the foundation of our work.”

Yet recently, CDC scientists were banned from responding to basic data requests from reporters without political approval—a clear violation of the agency’s scientific integrity policy.

Sidelining Science Since Day One

This starts with words and communication, but it’s just the tip of the iceberg. Just last week, Interior Sec. Ryan Zinke summoned the head of Joshua Tree National Park to his office for a tongue lashing over tweets the park had sent out referencing climate change. That’s right: the park director flew across the country to be reprimanded for a couple of tweets, in order to send a message to all park directors: talking about climate change is verboten.

And oh, if only word choice was the worst action this administration has taken to undermine the use of science in policy-making. They’re not just trying to downplay the phrase “evidence-based.” They’re trying to ditch the whole idea of basing policy on evidence.

In July, we chronicled how the Trump administration has sidelined science since day one. And since then the abuses of evidence have continued to flow.

The Treasury Secretary claimed that economists were working “around the clock” to come up with analysis justifying the tax bill. They were not. The EPA banned scientists who receive EPA grants—the ones the agency has decided do the most promising environmental and public health research—from providing science advice to the agency. The Department of Interior is trying to defund and prevent public access to the U.S. Geological Survey library system.

The White House has no science advisor, and the president’s Office of Science and Technology Policy is a ghost town. Numerous political appointees—including the CDC director and the nominee for NOAA administrator—have financial conflicts of interest that lead many to question their ability to do the jobs. The administration has shut down studies where it expects it won’t like the outcome: on climate change in the tropics, on teen pregnancy prevention and on the health risks of surface coal mining in West Virginia. Science agencies are targeted across the board for severe budget cuts.

An exhaustive list is, quite frankly, impossible. President Trump’s attacks on science harm our environment and make all of us sicker and less safe. If the Trump administration won’t allow federal agencies to do their job, it’s time to ask Congress to step up its game, engage in meaningful oversight and do its job.

Michael Halpern is an expert on political interference in science and solutions to reduce suppression, manipulation and distortion of government science.