Wonder Where Your Hard-Earned Tax Dollars are Going? 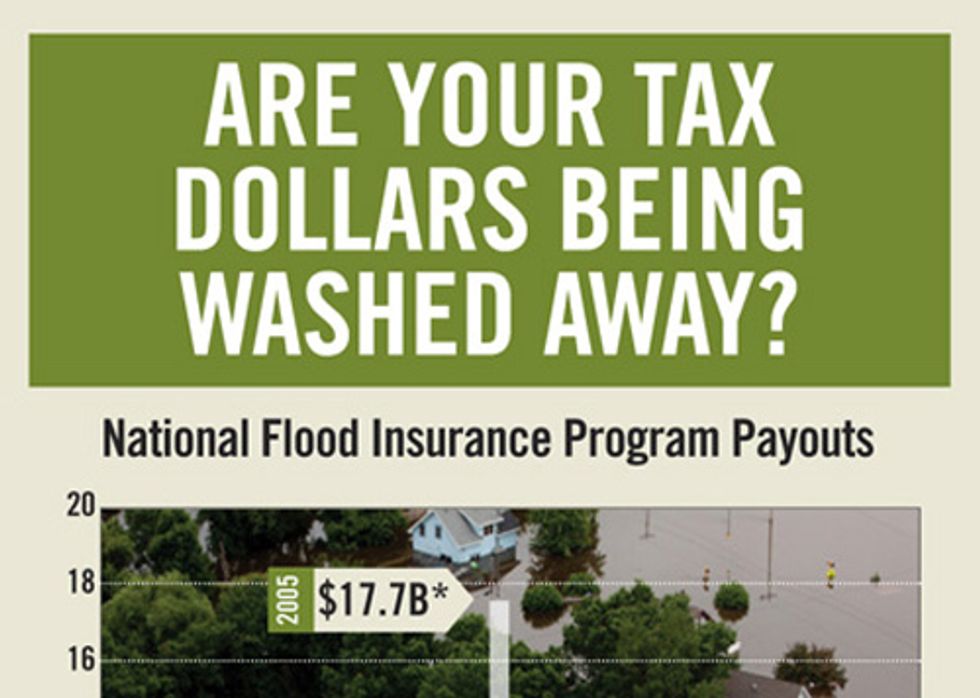 A growing chunk of American tax dollars is footing the bill for increasing floods, fires, droughts and other climate related changes taking place in the country, according to new figures compiled by Ceres, a nonprofit organization mobilizing business leadership on climate change.

“Climate change is fundamentally changing the United States, and American taxpayers are paying a huge price for it,” said Ceres president Mindy Lubber. “The cost of withered crops, submerged streets, hurricane damage and wildfires eventually comes out of our own wallets. Crop insurance losses from last year’s drought alone cost every person in America $51.”

Floods
The National Flood Insurance Program (NFIP) is staggering under massive losses after Hurricane Sandy, which triggered more than 115,000 new claims in just the first two weeks after the storm. Although NFIP collects about $3.5 billion a year in premiums, the amount of claims the agency has paid out has exceeded the amount of premiums collected in four of the past eight years. Last year's losses in Sandy's wake are expected to approach $8 billion.

“That’s $25 for every American, and that figure doesn’t even include the $50 billion of disaster relief that Congress approved in January for Sandy-impacted states,” Lubber said.

Food
Taxpayers subsidize the Federal Crop Insurance program that was created during the 1930s Dust Bowl to protect farmers against crop losses. Federal crop insurance losses, due in part to the devastating, ongoing drought, have tripled in the past three years to $16 billion in payouts for 2012, or $51 for every man, woman and child in America.

“This year will likely be costly too,” Lubber said. “The latest numbers from the U.S. Drought Monitor show more than 64 percent of the country is now experiencing some level of drought.”

Fires
In 2012, more than nine million acres burned in wildfires—an area larger than the state of Maryland—making it the third-worst fire year in U.S. history. In 2012, the Forest Service overspent its available fire suppression budget by $400 million, as it has almost every year for the last 20 years, transferring millions of dollars away from other land management projects. And climate models show a likely increase in fires in coming years.

“The costs are not only borne by the federal government,” said Lubber. “Wyoming and Montana spent more than $90 million of state money fighting wildfires in 2012.”

The state insurer in Florida, for example, is carrying the burden of more than one million homeowners’ policies—a financial catastrophe just waiting for state taxpayers the next time a major hurricane hits Florida. State government-loss exposure in hurricane-prone states (such as Florida, Texas and Massachusetts) now exceeds $885 billion, a 16-fold jump from 1990.

“As Americans pay their taxes on April 15, let’s consider what our political leaders—in Washington and our state capitals—are doing to address climate change,” Lubber added. “Let's hope, for our wallets’ sakes, they're tackling the issue head-on.”