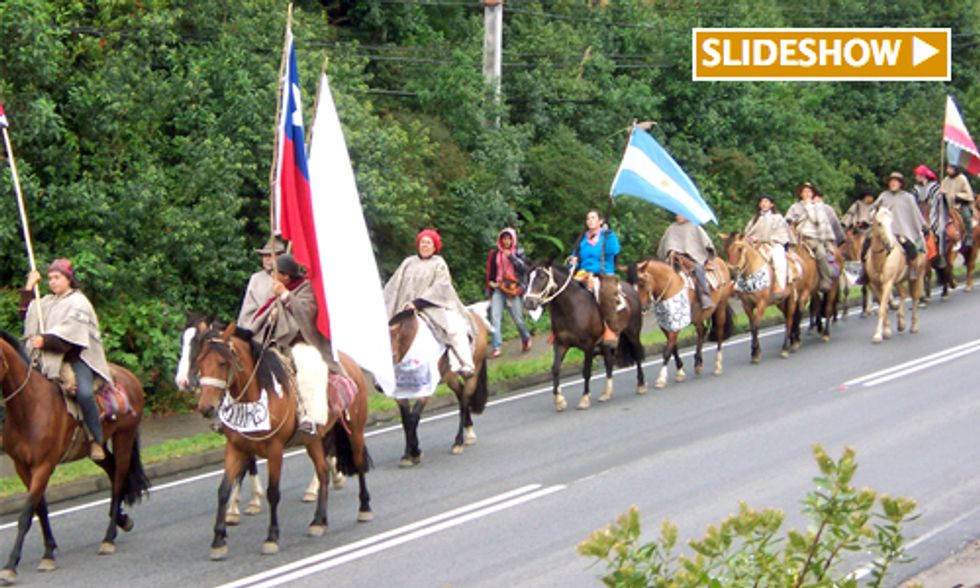 Amidst growing concerns about the destruction of Patagonia at the hands of the mining and energy sectors, 45 women from different regions of Chile and Argentina came together in January for a five-day cabalgata to call attention to the damming of Patagonia's rivers.

Led by María Isabel Navarrete, a native of the town of Futaleufu and the outspoken president of Mujeres sin Fronteras (Women Without Borders), the women made the 137-mile trek on horseback along the length of the Manso and Puelo Rivers. In the words of Mujeres sin Fronteras, the purpose of the trek was “to defend our tradition, our earth, and the future of our children, a future that is threatened by the power of companies that care only about profits and their own enrichment."

Together the Manso and Puelo Rivers drain a massive watershed that straddles the Chilean region of Los Lagos and the Argentinean provinces of Rio Negro and Chubut. On the Chilean side the Puelo-Manso watershed is facing two hydroelectric projects, one of which is expected to gain environmental approval before President Piñera leaves office in March.

Those of us working on river conservation in Chile are keeping a close eye on the Puelo, and how we can work together to protect binational watersheds in the region. If approved, the two projects will drastically reshape the course of the rivers and have severe impacts on local tourism and agriculture, the two most important sources of income in the region.

Over half the province depends on tourism alone, while the rest engage in farming and fishing. Besides the ecological impacts of the dams themselves, the companies are planning to build transmission lines to connect the energy to the grid several hundred kilometers away, cutting a path along the most scenic parts of the watershed while bringing no additional benefit to the local population.

Communities in Argentina also oppose the dams, which they fear will ship energy across the border to supply Argentina's mining boom. In addition to existing mining projects, fracking operations have recently been proposed in the neighboring Neuquén province, where major players including Chevron are promising the government tax revenues and profit-sharing in exchange for a license to frack. These projects need large sources of energy to be viable, and in that context putting dams on Patagonia's rivers seems an obvious choice. In response, local leaders on both sides of the border are now joining together to make sure that doesn't happen.

From the Mountains to the Sea

Participants in the cabalgata gathered at the indigenous Mapuche village of Primer Corral on an early Sunday morning and spent the next four days descending along the length of the river, stopping at night to rest and leaving at sunrise to continue the march. The fifth day of the cabalgata saw a large gathering of women, men and children as others joined to celebrate the march in Puerto Varas. Posts and photos from the event spread through social media and press at the local, national and international levels.

The route of the cabalgata—from oft-ignored villages to the port cities of Puerto Varas and neighboring Puerto Montt—was designed to send a message to Chile's regional and national governments. Communities on both sides of Patagonia are confronting the reality that decisions about the region's future are made remotely, in the halls of government in Santiago and Buenos Aires. Even decisions left to regional officials are often made far from where the economic and environmental impacts will be felt; Puerto Montt, the administrative capital of Chile's Los Lagos Region, is a 15-hour trip from Futaleufú in good weather. This distance makes it hard for citizens to stay informed about proposed projects designed at the regional level, even essential ones like road improvements.

The vast size of Patagonia also makes it a challenge to unite these communities. The region straddles two countries and covers over 400,000 square miles, or about the size of Texas and California put together. Rugged terrain, an unpredictable climate, and poor roads make long distances even longer. The national border between Chile and Argentina throws up an additional barrier, particularly in binational watersheds like the Puelo-Manso and the Futaleufu. In these basins the formidable Andes Mountains open up, and were it not for the border restrictions a visit to a town in the neighboring country would be as easy as going for a hike along the riverbank. Protectionist trade restrictions between the two countries further restrict the flow of people. To further complicate matters, permit decisions that impact binational watersheds are different in each country, and do not include stakeholders despite a 1991 treaty and protocol to ensure the sustainable use of shared hydrological resources.

The fight, of course, is a tough one. Powerful companies, among them Endesa, Mediterraneo, Xtrata and Energia Austral, are trying to sell Chile on a plan that would destroy its most prized rivers and wipe out the rural and eco-based tourism sectors upon which many people depend. Several binational watersheds are now at risk, including the Puelo-Manso, the Futaleufú and the Baker (where the fight to stop HidroAysén is ongoing). Mediterraneo's project on the Manso is slated for a government decision before March on whether to grant a Resolution of Environmental Qualification (RCA), which will allow the project to move forward. The project is backed by a group of investors with close ties to President Piñera, including two sitting Piñera administration officials. Groups like Mujeres sin Fronteras have accused the government of fast-tracking the project without adequate citizen participation, and local activists have already pledged to file lawsuits seeking annulment of the RCA if it is granted. But for those lawsuits to be successful the world must be paying attention.

The call to action issued by Mujeres sin Fronteras is maternal, nurturing, defiant. “… [O]ur women, the mothers of yesterday and the daughters of tomorrow, like in past times and all throughout human history, provide the foundation for our families and communities. They have the key to stop this tragedy that is leading us towards certain extinction. It is us women who feel in our own wombs the responsibility to reestablish the balance lost. Thus, as we are the ones giving life, we will undoubtedly be the ones to defend it."

A key tenet of the cabalgata was promoting cross-border collaboration among women who have grown up or raised families in the mountainous region. Participants came from the Neuquén, Rio Negro, and Chubut provinces of Argentina and the Los Rios and Los Lagos regions of Chile. The cabalgata united the “sisters of different cities in Chile [and] Argentina" to “defend our tradition, our earth, and the future of our children." María Isabel is fierce in her resolve; her voice reveals a strong determination to connect these local leaders in the fight.

Women Without Borders, a Patagonia Without Dams

The leaders of the cabalgata plan to turn this into an annual event to oppose the building of dams in the region. They are also hoping to support similar cabalgatas in other watersheds at risk. This includes the Futaleufú, where Futaleufú Riverkeeper works, and where Endesa is continuing plans to install three dams and destroy one of the most beautiful rivers in the world. María Isabel's family includes some of the original settlers to the Futaleufú watershed, and other Futaleufú natives are talking about leading a similar effort to raise the alarms.

The Mujeres sin Fronteras campaign is changing the fight in Patagonia. They are proving it is possible to connect people along a shared waterway, even when a river starts in one country and greets the sea in another. They are lifting up the cultural heritage that further ties these communities together, adopting the symbols of Patagonia in a call to arms. The gaucho on horseback; neighbors sharing yerba mate around a stove after a hard day; the flag of the Mapuche people that symbolizes renewal, power, and a fertile earth. And they are inspiring organizations like ours that want to see Patagonia protected and are developing the tools these communities will need to win in the long-term.

Going forward, groups like Mujeres sin Fronteras are determined to stay vigilant in giving rural communities a voice. We must keep encouraging the type of cultural bridge-building that elevates local community issues. And at the same time, the world must stay alert so that Chile and Argentina do not allow multinational companies to destroy these resources over the strong objections of their people.

That is why we must join forces; across watersheds, cultures and political borders. One thing is certain: María Isabel and the Women Without Borders have brought the fight out into the open, in an act that will be remembered in this part of the world for years to come.

Patrick J. Lynch is International Director for Fundación Futaleufú Riverkeeper, the first Waterkeeper program in Patagonia and a member of the Patagonia Sin Represas campaign. More information at www.futaleufuriverkeeper.org.