Women of the World Call for Urgent Action on Climate Change 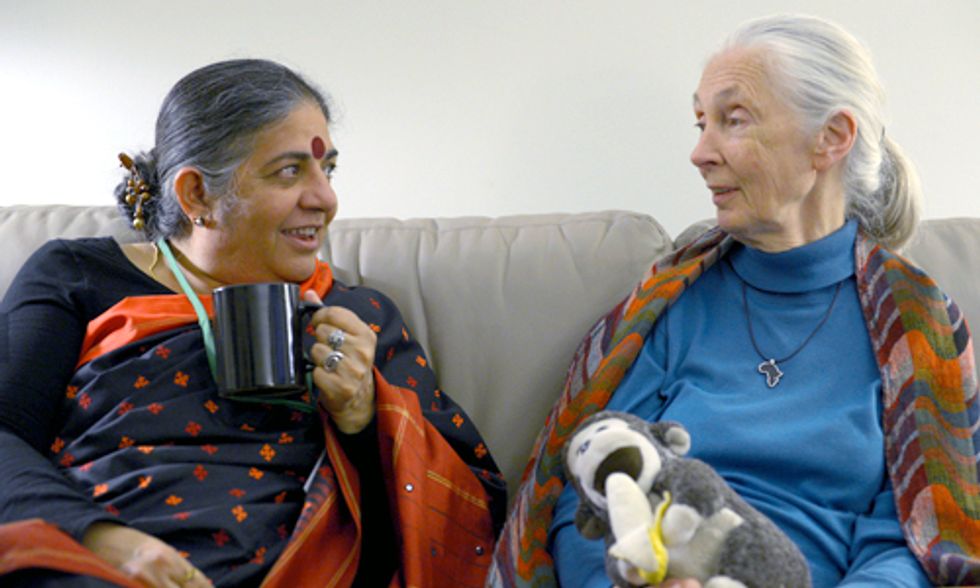 Apart from those imprisoned in a fortress of science denial, 69 percent of Americans give credence to the 95 percent of climate scientists who agree on the reality and trajectory of human-induced climate change.

Nevertheless, the levers on its supersized drivers don’t seem to be within our grasp. Americans live with this looming threat, without knowing if , when or how it will overtake our lives. Even when it shows up on our doorsteps—such as direct hits like Katrina and Sandy or compound hits like floods and fracking in Colorado or tsunamis and nuclear meltdowns like Fukushima—it doesn't derail American life from business as usual.

Not everyone is waiting for more tragedy to occur before working on solutions to climate change. Last month, the International Women’s Earth and Climate Summit took place in Suffern, NY, with 100 women delegates, top-level policymakers, grassroots organizers and indigenous chiefs from around the world. From the heart of the Amazon Rainforest, to the forests of the Congo, to the foothills of Himalayas, organizers and indigenous tribal leaders from Africa, Asia, Latin America, Europe and North America assembled, speaking different languages, wearing different garbs, embedded in different cultures, but all devoted to the health of the Earth and future generations.

They came from afar to do what women do, talk and listen, share and support, as well as organize, strategize and plan concrete ways to support the continuation of human life on Earth.

“We need to value the expertise of women, who have cultivated the land to feed their families, to counter a form of expertise that only knows how to destroy the Earth, to exploit and reward the exploiters,” said Dr. Vandana Shiva at the conference.

Listening to each others stories, participants were confronted by what first world people rarely see, climate chaos, the ecological destruction of lands, oceans and water sources, the uprooting of homes and communities, the despoiling of food and water, all of which strike at the life supports of peoples in nearly every region of the Earth. Not decades from now, but today.

For Americans, an interruption in cell phone service is tough. Yet in many parts of the world, there is no electricity, water or food.

“We used to have rain from the river to water the maize and now we don’t have the rain and the river has dried up,” Rosemary Enie from Tanzania told the other delegates.

The delegates’ accounts of rainfalls that no longer come, food crops that wither, felled forests that turn to deserts, snow caps that melt, species that die out and insect populations that run rampant, brought the distant damage to our doorstep. Even seemingly innocuous changes, like Japan’s cherry trees blossoming three weeks earlier, signify ecological shifts.

Dr. Vandana Shiva, left, and Dr. Jane Goodall, both are delegates to the International Women's Earth and Climate Summit, talk before the opening of the summit. Photo credit: Lori Waselchuk

The conference was yet another reminder that the U.S. is inextricably bound by multinational corporations. Many corporations appropriate the Earth’s limited resources without real accountability to any nation, people or law. “They used to be contained by the rules of democracy and they have knocked off those rules—bit by bit,” Goodall said.

“Civilized people in all parts of the world act wisely by looking to the effects of current activities for seven generations. Uncivilized people rape the earth for today,” said Dr. Shiva.

It’s one thing to know that systemic dilemma, and it’s another to meet women whose families, communities and regions are taking the first hit. Their commitment is formidable. Hearing the Earth’s tale told by diverse voices, in distinct accents, but all with a common theme, broke my heart. Because their faces, their voices, their accounts of their beloved regions awoke me from the distant but still abstract notion of climate change. In their hearts and minds, they brought the lived and embodied experience of global warming. And in encountering them, I grasped it.

The summit organizers sought to gather women because women are more impacted by climate change, more motivated to address it, and yet, are minimally represented at climate negotiations.

“You are the women willing to take a stand,” conference organizer Osprey Orielle Lake told the delegates before they signed a joint climate declaration that states:

We are gathering to raise our voices to advocate for an Earth-respecting cultural narrative, one of “restore, respect, replenish” and to replace the narrative of  “domination, depletion and destruction” of nature.

We are committed to a transition from a future of peril to a future of promise, to rally the women around the world to join together in action at all levels until the climate crisis is solved.