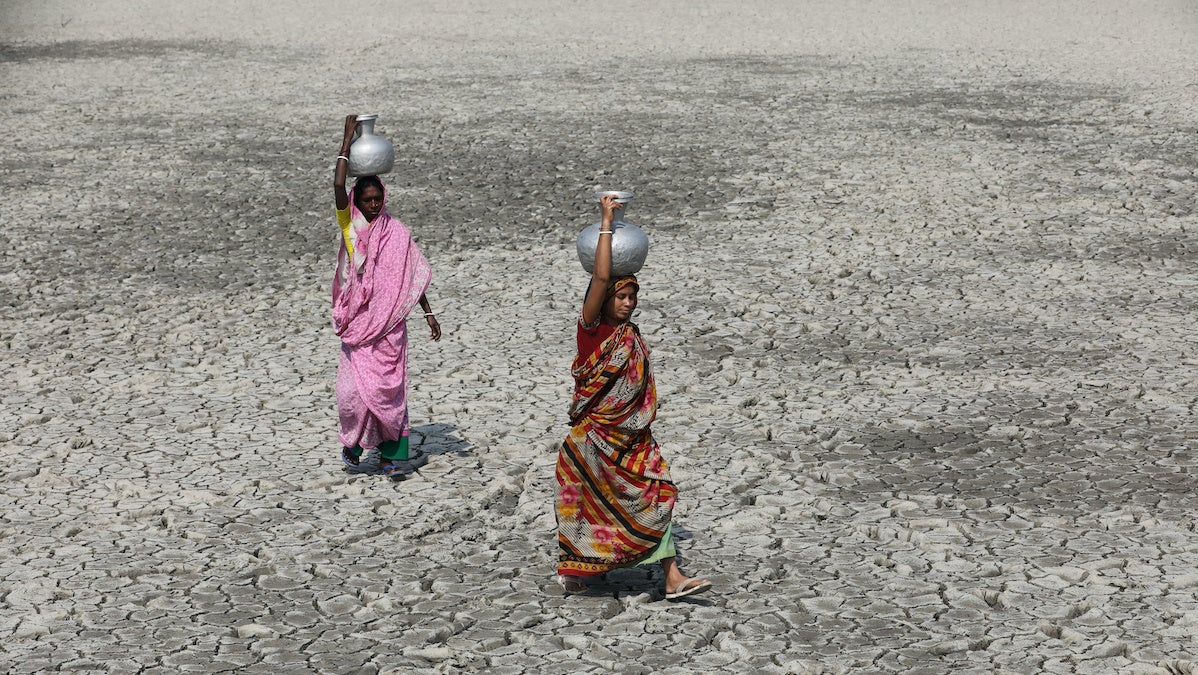 Extreme climate events are increasingly threatening countries and livelihoods. Devastating natural disasters and unpredictable weather have made communities more vulnerable and impoverished, especially women. According to the United Nations, 80% of people displaced by climate change are women. But what makes them more susceptible to the effects of climate catastrophe?

According to the World Bank, people in low-income communities suffer the most from these events, due to poverty, lack of resources and of awareness. Sudden climate catastrophes such as floods, wildfires and droughts displace people and affect their income.

Within these communities, cultural barriers, gender norms and lack of education leave women even further behind men. They are left to take care of families, work in farming for low wages, with little knowledge of survival skills (in 2004, for example, more women in Thailand died of the tsunami because they stayed back looking for their children and because culturally, they are not taught skills such as swimming, climbing trees, etc.).

Lack of education makes women more dependent on their families and communities, less employable, with little opportunity to move beyond where they are born. Therefore, when sudden climate disasters strike, they are more vulnerable. The responsibility of looking after children further jeopardizes them. Furthermore, climate emergencies are often followed by health risks in South Asian countries, such as the spread of diseases like malaria, dengue, etc. It is the mothers who are hardest affected by these tragedies, often being unable to provide sufficient healthcare for their children.

At the same time, climate disasters affect agriculture in poorer areas, which directly impacts women. In India, 80% of all economically active women are in the agriculture sector, comprising 33% of the total agriculture labor force and 48% of self-employed farmers. Many women in Africa walk miles in search of water; severe droughts worsened by the climate crisis mean that they have to travel further, risking their health and safety, and their children’s. In Central Africa, where up to 90% of Lake Chad has disappeared, nomadic indigenous groups are particularly at risk.

Men’s stories are no less distressing. Unreliable rain patterns force them to work for longer hours, search for jobs beyond their communities, and lose income due to crop failures. However, this makes women work twice as hard to support their husbands to earn a living while looking after children. In developing countries, women are often given no education or independence and lack employment opportunities. As a result, they are under-represented in society. Globally, the proportion of seats held by women in national parliaments is only 24% as of 2019. The UN Climate Change Conference COP24 in 2018 had only 38% representation of women, with only 1% increase from the previous year. These numbers demonstrate the lack of participation of women in key policy- and decision-making, limiting their ability to advocate for climate solutions. Two-fifths of countries worldwide limit women’s property rights; in 19 countries, women still do not have equal ownership rights to immovable property. Disregarding half of the world’s population and their needs will not bring sustainable, inclusive or holistic climate-mitigation actions.

Educating women about climate change and its impact will be pivotal to making them climate-resilient. In Zambia, 78% of small-scale farmers are women. Severe droughts and erratic weather patterns have cost the country more than .8 billion in crop failures. Lack of education and exposure make it difficult for women in Zambia to progress beyond traditional beliefs to understanding the reasons behind crop failure. To remedy this, they are being introduced to improved weather forecasting tools, knowledge and consultation on climate change, to prepare them better for the next farming seasons.

In Latin America, the World Food Programme is helping women in indigenous communities between Ecuador and Colombia adapt climate-smart farming by combining scientific knowledge with traditional local practices to promote climate-resilient activities, such as cocoa cultivation, to earn a living and increase food sufficiency within communities. In addition, climate-smart projects such as the Lima Work Programme on Gender (LWPG) aim to advance equal participation of women, promote gender-responsive climate policy and mainstream gender in the UNFCCC process.

Involving women in key decision-making within communities and empowering them with skills improves their resilience and climate-adaptive action. In 2015, Seacology, in collaboration with a local NGO, conducted a mangrove conservation project in Sri Lanka, replanting 9,600 acres of mangrove forests that have been cut down. The project provided alternative job training and microloans to approximately 12,000 impoverished women in 1,500 small fishing communities, teaching them to be climate-smart and become ground-level leaders, fostering sustainable farming methods. In addition, UNEP surveyed 32 villages in six remote districts in Bangladesh and identified 11 occupations that could use solar energy, benefiting nearly 300 women directly. Access to clean energy helps women in impoverished communities work less in the fields and focus more on their families.

Including women in more decision-making positions, educating them with transversal skills and involving them in climate-resilient projects will not only empower women in disadvantaged communities, but promotes them as equal stakeholders in finding solutions to climate catastrophe.