Wolf Slaughter Is Not American 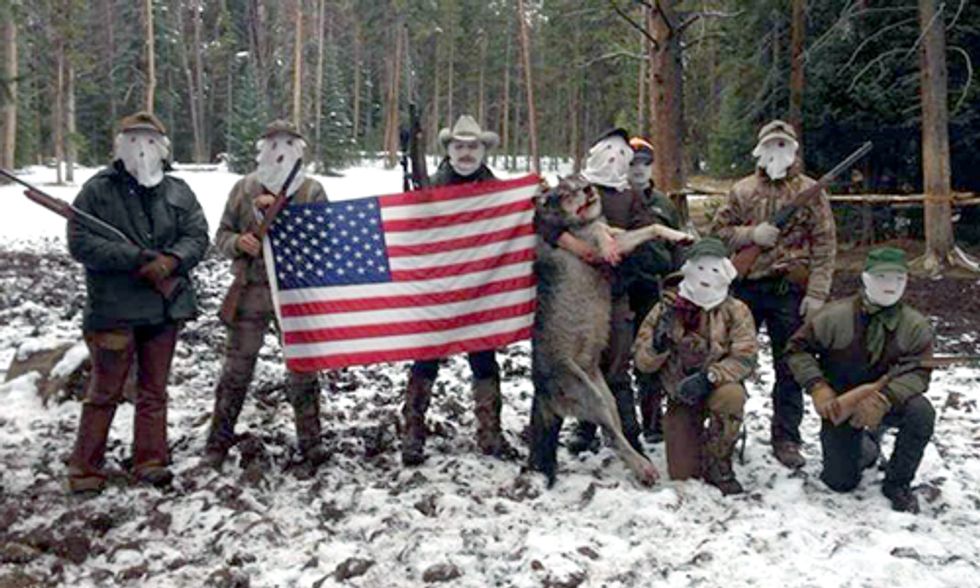 “Fed Up in Wyoming” reads the caption under this stunning photograph posted on a hunter's Facebook page (reproduced here under Fair Use). The photo is yet more evidence that, two years after political reactionaries led a successful campaign in the House of Representatives and then the Senate to remove the North Rocky Mountain gray wolf from the endangered species list, the slaughter of wolves continues to escalate as wolf hunters fall deeper in their paranoid fantasy that the wolf represents a liberal conspiracy against rural communities.

Wolves aren't actually any danger to people or much of a threat to ranchers' livestock. And the U.S. government permits them to be killed. There's no real transgression here requiring a mask. It's all theater meant to self-impress.

The Facebook page that originally posted the image belongs to two Wyoming hunting outfitters, Colby and Codi Gines. The Gines run CG Wilderness Adventures, headquartered in a highly remote part of Wyoming’s Bridger Teton National Forest, bordering on the southeast section of Yellowstone National Park. “Wyoming is God’s country, and we invite you to come see it for yourself,” says the Gines’ website.

Their invitation evidently does not extend to wolves. Driven extinct in most of the continental U.S. in the late nineteenth and early twentieth centuries, the wolf returned to the American landscape in 1995, when the U.S. Fish and Wildlife Service reintroduced 66 wolves captured in the Canadian Rockies to Central Idaho and Yellowstone National Park. Conservationists saw as the return of the wolf as a crowning accomplishment to renew the wilderness, and millions of Americans came to celebrate the wolf's comeback. But by 2009 a virulent opposition movement opposed to the wolf had formed. Made up of hunters and outfitters, ranchers, and far-right groups, these forces coalesced around a cultural mythology in which wolves became demons—disease ridden, dangerous foreign invaders—who served as icons of the hated federal government. (Read Cry Wolf, our in-depth report on this issue.)

With the Klan-like hoods and the ostentatious display of the American flag, the photo is a glimpse into the mentality of those behind the anti-wolf campaign. There is, apparently, a cohort of people who view the destruction of wild nature as something to be celebrated, something quintessentially America. They are play acting at both patriotism and rebellion. And, in their play-acting, they reveal a great deal about the paranoid fantasies that have gripped some people in the age of Obama.

The Facebook comments following the photo are especially revealing. Among those who LIKE this page is Sportsmen Against Wolves, a group whose “About” statement is, “Sportsmen against illegally introduced Canadian Gray Wolves.” Here's one wolf-killing friend, J. Weeks, commenting on the photo: “Kill all federally funded terrorists. ”

To some, the reintroduction of wolves represents Washington’s treason against civilization itself: “Yet another brilliant bleeding heart program…reestablish the bloodthirsty critter that every civilization from the dawn of time has tried to eliminate,” says Johnny W. To Sarah H., the wolf killing is just self-defense: “I imagine they don’t want any wolfies to come after them or their families!” Then Haines complained that only one had been killed—there “should be a pile of them tho!”

The white hoods, with their echoes of Jim Crow-era terrorism, were actually celebrated by some commenters. “Redneck KKK” wrote Austin T. One fan, Julia G., argued that the wolf hunters should be more brazen, posting, “Next time they go full REGALIA.”

For their part, the Gines prefer to call the hoods the sign of “Vigilantes,” a way of “Trying to make a statement!...Frontier Justice! Wyoming hunters are fed up!” John P. concurred, “Yeehaw...looks like modern day Wyoming rangers taking care of business!!!!!”

Some commenters suggested that the wolf hunters wore hoods to protect themselves from government persecution. One supporter of masked men posted, “I fully understand the masks…Keep on killing guys.”

It would seem that wolf hunting is the wildlife version of George Zimmerman's vigilantism—self appointed keepers of order waging a battle against an imaginary enemy.

Or maybe it's worse, and the wolf hunters with their KKK masks are more like shades of Timothy McVeigh. The cammo gear, the rifles—it’s as if the wolf hunters were fighting a guerrilla war against Washington. As if they were worried that at any moment a U.S. Fish and Wildlife Service black helicopter would swoop down and a SWAT team emerge, assault rifles blazing.

But it's a phony rebellion against a phantom menace. The wolves aren't actually any danger to people or much of a threat to ranchers' livestock. And the U.S. government permits them to be killed. There's no real transgression here requiring a mask. It's all theater meant to self-impress.

In April, 2011, the House and Senate sponsored a “rider” on a federal budget bill that removed gray wolves in the Northern Rockies from the protection of the Endangered Species Act. Here's the very long story in short: Sen. Jon Tester (D-MT) faced a rough challenge in the 2012 Montana election, and sacrificing wolves as expendable was deemed politically expedient to win the race. Wolf hunts renewed in Idaho and Montana that fall. Legal challenges by environmental groups against the delisting failed.

Wyoming took until 2012 to win full federal approval for a plan to declare the lands near Yellowstone a “trophy zone” with wolf quotas. In most of the state, wolves can be killed year round without limits. The Gines’ hunting operation is in “Wolf Hunt Area 3.” In late October they reported killing two wolves, filling its quota of three wolves (one had been hunted earlier). Whether the wolf in this photo is one of the three legally killed is not known.

The Northern Rockies have become an unsupervised playpen for reactionaries to act out warrior fantasies against demonic wolves, coastal elites and idiotic environmentalists—the members of these latter two categories being “two-legged” wolves. The sheer extremity of the hatred shown to wolves, and the bizarre juxtaposition of the KKK-like hoods and American flag, plainly expose this movement for what it is: a scapegoating of the wolves by men and women who have succumbed to their own rage against imagined enemies. And while the failure of federal, state and local political leaders to denounce the anti-wolf movement illuminates their moral failure, history offers encouraging instances of public indignation creating change from below.

Take, as just one example, the eventual take-down of Sen. Joe McCarthy (R-WI). After years of cynical Red-baiting, including accusing high ranking military and intelligence officials of treason, McCarthy was eventually brought to a kind of justice. McCarthy accused the U.S. Army of harboring Communists and, in June 1954, in the course of a televised Senate investigation of the Army-McCarthy conflict, McCarthy accused a young lawyer working for Army counsel, Joseph Welch, of being affiliated with communism. After McCarthy repeatedly pressed his accusations, Welch savaged McCarthy: “Let us not assassinate this lad further, Senator. You’ve done enough. Have you no sense of decency, sir? At long last, have you left no sense of decency?” Welch’s indignation broke the spell McCarthy had cast upon the nation and ended his political career.

Perhaps this latest wolf snuff photo will bring a similar kind of justice and force the public to declare, in no uncertain terms, that wolf killing is un-American. Maybe it will force people to ask: when will this indecent killing come to an end?