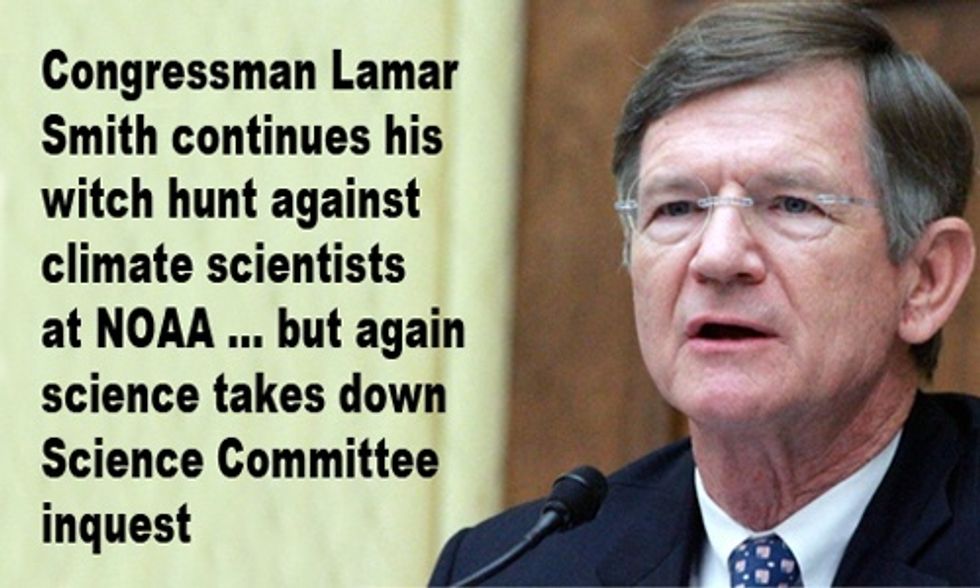 Last week, Congressman Lamar Smith (R-TX) continued his witch hunt against climate scientists at the National Oceanic and Atmospheric Administration (NOAA) by convening yet another congressional Science Committee hearing on the topic of climate change, where he continued accusing NOAA of altering data "to get politically correct results.” What Smith considers data manipulation, of course, was simply the necessary improvement of NOAA's sea surface temperature database to include more weather stations, making the data more accurate.

Now, in addition to the overwhelming evidence already exonerating NOAA of any wrongdoing—including ample scientific support for the NOAA study under question and its finding that there was no slowdown in global surface temperature increase—a new study finds that the NOAA temperature adjustments accomplished just what they set out to do. According to Dana Nuccitelli at the Guardian, "[The adjustments removed] biases in the raw data to make it more accurately reflect the true temperature changes at each measurement station."

The purpose of the study, led by Zeke Hausfather of Berkeley Earth, was to check how well NOAA's adjusted data reflects average temperature and the warming trend when compared to "pristine reference data"—a network of 114 weather stations, situated away from cities, with three temperature sensors that measure every two seconds and send this information automatically via satellite. What was the result? NOAA's adjustments brought the data closer to the pristine reference data from 2004 to 2015.

So yet again we see that, rather than manipulating data to prove global warming, NOAA was just being thorough and doing its job. If only the Science Committee would start doing theirs!