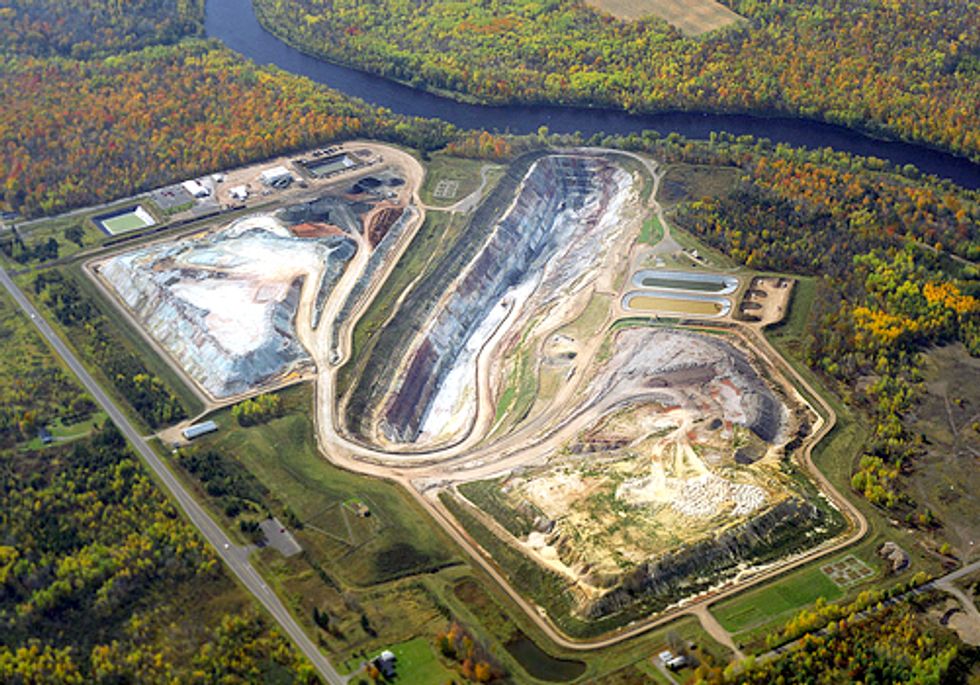 The Flambeau Mine near Ladysmith, Wisconsin before reclamation. The Wisconsin Department of Natural Resources recently completed an investigation of water quality at the Flambeau Mine site and recommended that “Stream C,” a tributary of the Flambeau River into which Flambeau Mining Company has been discharging polluted runoff from the mine site since 1999, be included on its list of “impaired waters” for 2012 for “acute aquatic toxicity” caused by copper and zinc.

Wisconsin Governor Scott Walker and the mining industry have begun a major lobbying effort to overturn Wisconsin’s landmark Mining Moratorium Law. The law, also known as Wisconsin’s “Prove it First” law, was developed to address the problem of acid mine drainage from metallic sulfide mining.

The law requires that before the state can issue a permit for mining of sulfide ore bodies, prospective miners must first provide an example of where a metallic sulfide mine in the U.S. or Canada has not polluted surface or groundwater during or after mining. So far, the industry has not been able to find a single example where they have mined without polluting water. A recent study of metallic sulfide regulation in the Great Lakes region by the National Wildlife Federation called Wisconsin’s “Prove it First” regulation an exemplary law.

Tim Sullivan, chairman of the Wisconsin Mining Association, is leading the effort to repeal the law. Sullivan is the governor’s special assistant for business and workforce development and a past director of the National Mining Association. He is a former president, CEO and director of Bucyrus International, the largest mining machinery company in the world, now owned by Caterpillar Corporation. He recently told a Wisconsin Senate Mining Committee that Wisconsin’s Mining Moratorium was an obstacle to new sulfide mine proposals, including Aquila Resources’ gold and copper sulfide deposits in Marathon and Taylor counties in north central Wisconsin.

Mining lobbyists have cited the “success” of the partially-reclaimed Flambeau metallic sulfide mine in Ladysmith, Wisconsin, which Kennecott/Rio Tinto operated from 1993-97, as a reason for repealing “Prove it First” legislation. However, there is no scientific evidence to support such claims.

The Wisconsin Department of Natural Resources (DNR) recently completed an investigation of water quality at the Flambeau Mine site and recommended that “Stream C,” a tributary of the Flambeau River into which Flambeau Mining Company (FMC) has been discharging polluted runoff from the mine site since 1999, be included on its list of “impaired waters” for 2012 for “acute aquatic toxicity” caused by copper and zinc. These illegal discharges of toxic metals are why U.S. District Judge Barbara Crabb recently ruled that FMC violated the Clean Water Act on numerous counts.

Wisconsin is now under a well-funded mining industry attack on the grassroots environmental, sportfishing and tribal movement which mobilized tens of thousands of Wisconsin citizens to successfully oppose Exxon’s destructive Crandon mine at the headwaters of the Wolf River and enact Wisconsin’s landmark Mining Moratorium Law. That citizen movement also supported the sovereign right of the Mole Lake Ojibwe Tribe to protect itself from any mining pollution upstream from the tribe’s sacred wild rice beds. In 2003, BHP Billiton admitted defeat of the Crandon mine project and sold the mineral rights to the zinc and copper deposit to the Mole Lake Ojibwe and the Forest County Potawatomi Tribe.

Veterans of the 28-year Crandon mine battle were among those who mobilized public opinion against Gogebic Taconite’s (GTac) proposal for a giant open pit iron mine in the headwaters of the Bad River watershed adjacent to the sacred wild rice beds of the Bad River Ojibwe Tribe on the shore of Lake Superior. GTac wrote legislation that exempted itself from critical environmental protections and excluded the public and the tribes from the permitting process. Strong criticism of the Iron Mining bill led to its defeat by one vote in the Wisconsin Senate last spring.

With new GOP majorities in the Wisconsin Legislature, Governor Walker, along with the WMA and Wisconsin Manufacturers and Commerce, has made passage of the Iron Mining Bill and repeal of Wisconsin’s Mining Moratorium Law their top legislative priority in 2013.

Many of the new Republican legislators are unfamiliar with the Crandon mine conflict and the ongoing pollution at the closed Flambeau mine. How else can one explain the disregard for the sovereign rights of the Bad River Ojibwe Tribe, whose sacred wild rice beds and way of life are threatened by mining pollution from GTac’s proposed open pit mine?

The tribe has sovereign authority, under the Clean Water Act, to protect its wild rice from mining pollution. They also have the right to be consulted about any legislation that would affect their treaty rights. So far, these rights have been ignored. Legislators rushing to accommodate the wishes of powerful corporate actors may be in for a painful reminder about the power of engaged citizens and tribes.

Live in Wisconsin? Tell your state legislator to oppose attempts to repeal the sulfide mining moratorium, and to oppose the Iron Mining bill.

Al Gedicks is the executive secretary of the Wisconsin Resources Protection Council, one of the plaintiffs in the successful lawsuit against the Flambeau Mining Company. He is also the author of Resource Rebels: Native Challenges to Mining and Oil Corporations.

Dave Blouin is the mining committee chair for the Sierra Club—John Muir Chapter (WI) and co-founder of the Mining Impact Coalition of Wisconsin.