Could the Climate Crisis Be Behind the Coldest U.S. Christmas in Decades? 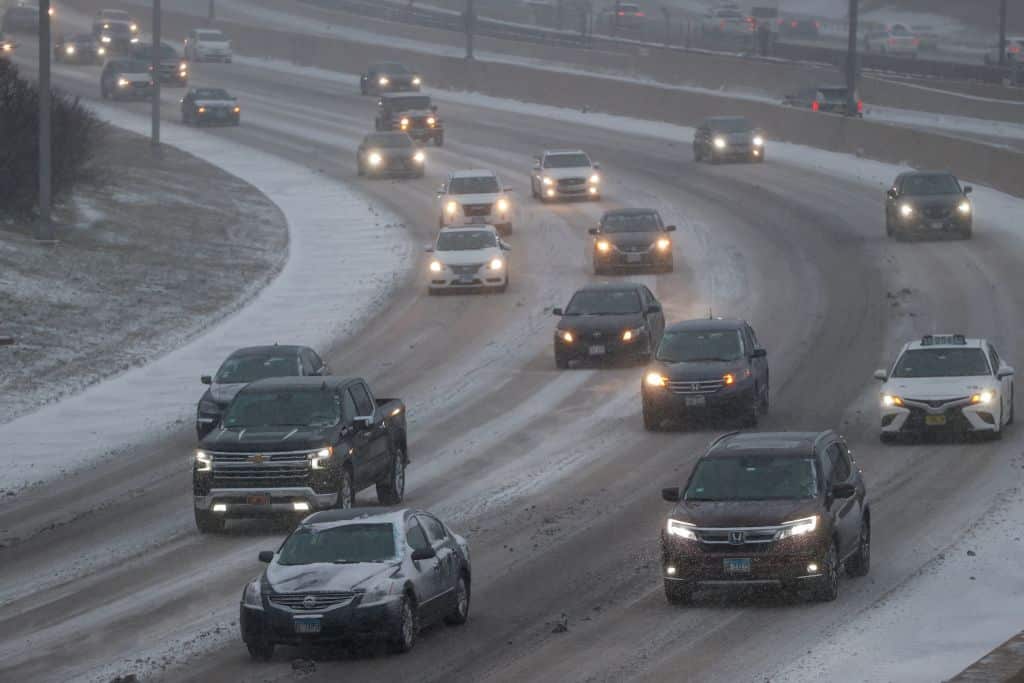 Vehicles move at the 1-90 Kennedy Expressway during the winter storm ahead of the Christmas holiday, in Chicago on December 22, 2022. KAMIL KRZACZYNSKI / AFP / Getty Images

This is one holiday season in which, throughout much of the U.S., the weather outside is sure to be frightful.

What the National Weather Service (NWS) in Buffalo, New York, termed “a once-in-a-generation storm” is expected to bring record chills and life-threatening conditions to much of the central and eastern U.S. over the Christmas weekend.

“I encourage everyone, everyone to please heed the local warnings. We’ve tried to contact 26 governors so far in affected regions. Go to weather.gov for more information,” President Joe Biden said in advance of the extreme weather event, as The Independent reported.. “This is not like a snow day when you were a kid. This is serious stuff.”

There are currently more than 30 states under watches and advisories from Washington in the northwest to Florida in the southeast, the NWS said in a Thursday morning update. There were around 300 million U.S. residents under some form of winter weather alert or advisory as of noon on Thursday, Axios reported.

The cold and wintry weather is currently moving eastward and could develop into a “bomb cyclone” by Friday, BBC News reported. A bomb cyclone is a term for what happens when a storm’s central air pressure plummets by at least 24 millibars in 24 hours, a sign of rapid intensification. They are usually accompanied by blizzards, heavy rainfall or thunderstorms.

“A major and anomalous storm system is forecast to produce a multitude of weather hazards through early this weekend, as heavy snowfall, strong winds, and dangerously cold temperatures span from the northern Great Basin through the Plains, Upper Midwest, Great Lakes, and the northern/central Appalachians,” the NWS wrote.

Ahead of the storm, a mass of Arctic air has been moving southward and eastward across the nation.

“Behind the front, temperatures across the central High Plains have already plummeted 50 degrees F in just a few hours, with widespread subzero readings extending throughout much of the central/northern Plains and northern Rockies/Great Basin,” NWS wrote.

While, on average, winter is the fastest warming season in the U.S. and the climate crisis is likely making the proverbial white Christmas ever more rare, there may still be climate signals in extreme cold snaps and winter storms like this weekend’s.

Learn About Solar Power From EcoWatch

This is because the Arctic has warmed nearly four times faster than the global average over the past 40 years, according to Newsweek. One hypothesis is that, as the Arctic warms, it destabilizes the stratospheric polar vortex that typically keeps the frigid air within a tight ring.

“When the circulation around the polar vortex becomes less and less circular in shape, the cold air normally confined to the Arctic can expand southward to the mid-latitudes, including the U.S., Europe and East Asia,” MIT climatologist Judah Cohen told Newsweek.

When the polar vortex destabilizes, the polar jet stream tends to destabilize as well, altering weather patterns. The contrast between the Arctic air and warmer, southerly air can create the perfect conditions for a rapidly intensifying bomb cyclone.

“The formation of any mid-latitude storm system requires a contrast of warm air from the lower latitudes and cold, polar air masses from the high latitudes,” University of Oklahoma meteorology professor Jason Furtado told Newsweek. “As such, middle latitude low-pressure centers feed on this temperature difference. The larger the difference in temperature, the more energy available to lower the central pressure and hence the more rapid the intensification.”

While it’s not certain that the destabilization of the polar vortex is caused by climate change, these events have been observed more frequently in the last 30 years.

At the same time, they impact a populace that is, on average, used to warmer weather, even in the winter.

“It will be more of a drastic change from what humans and other living things have been experiencing recently,” NWS Weather Prediction Center warning coordination meteorologist Alex Lamers said, as The Guardian reported.

This change could put a strain on the power grid and put people in danger, since they are unused to temperatures that can cause frostbite in less than five minutes.

Animals, too, could face a shock, especially bird species that have either delayed migration or extended their ranges because of global warming.

“Birds like bluebirds that tend to cue migration based on weather conditions and food availability may find themselves unable to cope with the cold snap while also trying to retreat from it,” National Audobon Society Director of Climate Science Brooke Bateman told The Guardian.