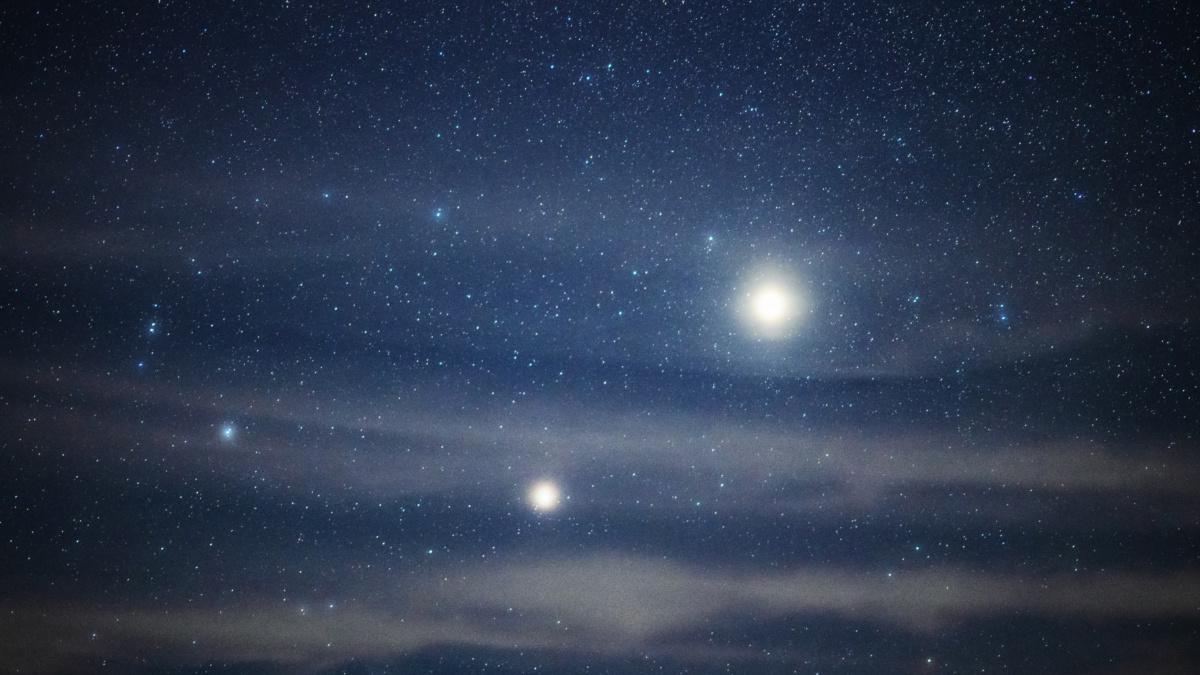 On Dec. 21, Saturn and Jupiter will appear so close together that some people may have a difficult time seeing them as two objects. Haitong Yu / Getty Images

Editor’s note: Dr. William Teets is the director of Vanderbilt University’s Dyer Observatory. In this interview, he explains what does and doesn’t happen during the winter solstice on Dec. 21. Another cosmic phenomenon is also going to occur on the same day called “the great conjunction,” where Saturn and Jupiter, both of which can be seen with the naked eye, will appear extremely close to one another.

What Happens on the Winter Solstice?

The winter solstice this year happens on Dec. 21. This is when the Sun appears the lowest in the Northern Hemisphere sky and is at its farthest southern point over Earth – directly over the Tropic of Capricorn. For folks living at 23.5 degrees south latitude, not only does this day mark their summer solstice, but they also see the Sun directly over them at local noon. After that, the Sun will start to creep back north again. 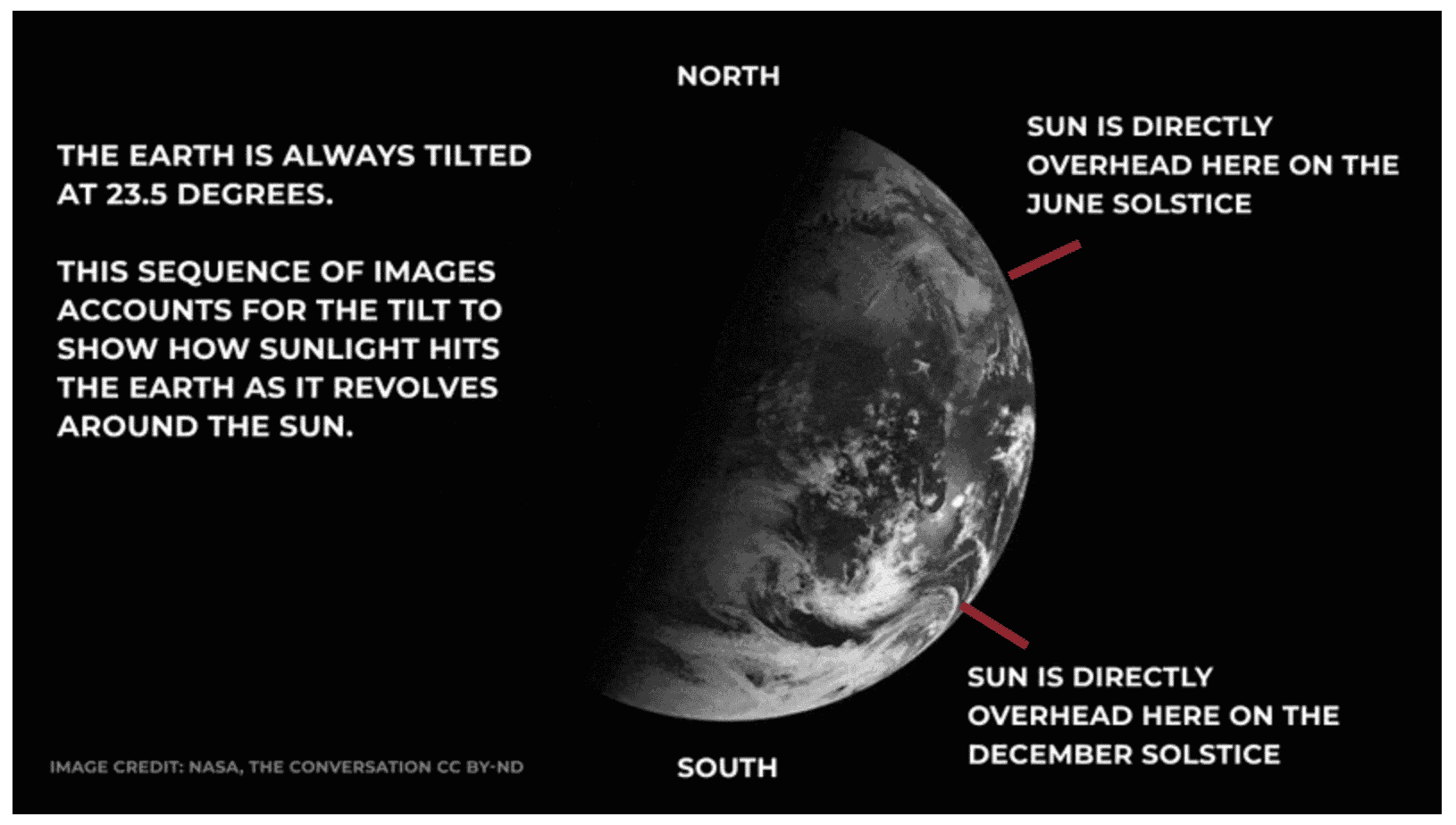 The sequence of images below shows the path of the Sun through the sky at different times of the year. You can see how the Sun is highest in the Northern Hemisphere sky in June, lowest in December, and halfway in between these positions in March and September during the equinoxes. 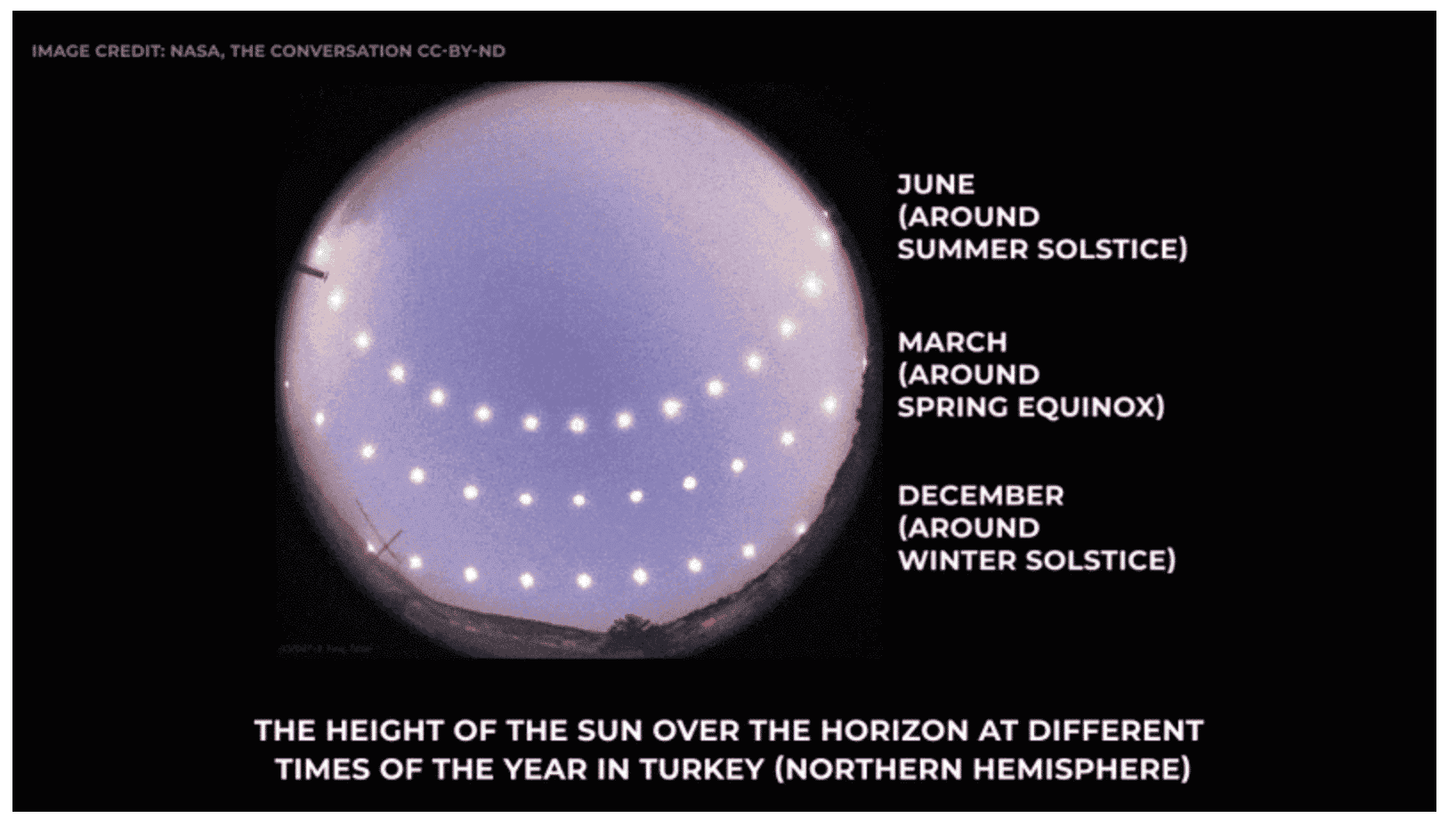 The winter solstice is the shortest day in the Northern Hemisphere but not the day with the latest sunrise and earliest sunset. How is that possible?

The winter solstice doesn’t coincide with the latest sunrise or the earliest sunset. Those actually occur about two weeks before and two weeks after the winter solstice. This is because we are changing our distance from the sun due to our elliptical, not circular, orbit, which changes the speed at which we orbit.

If you were to look at where the Sun is at exactly the same time of day over different days of the year, you would see that it’s not always in the same spot. Yes, the Sun is higher in the summer and lower in the winter, but it also moves from side to side of the average noontime position, which also plays a role in when the Sun rises and sets.

One should also keep in mind that the seasons are due to the Earth’s axial tilt, not our distance from the Sun. Believe it or not, we are closest to the Sun in January. 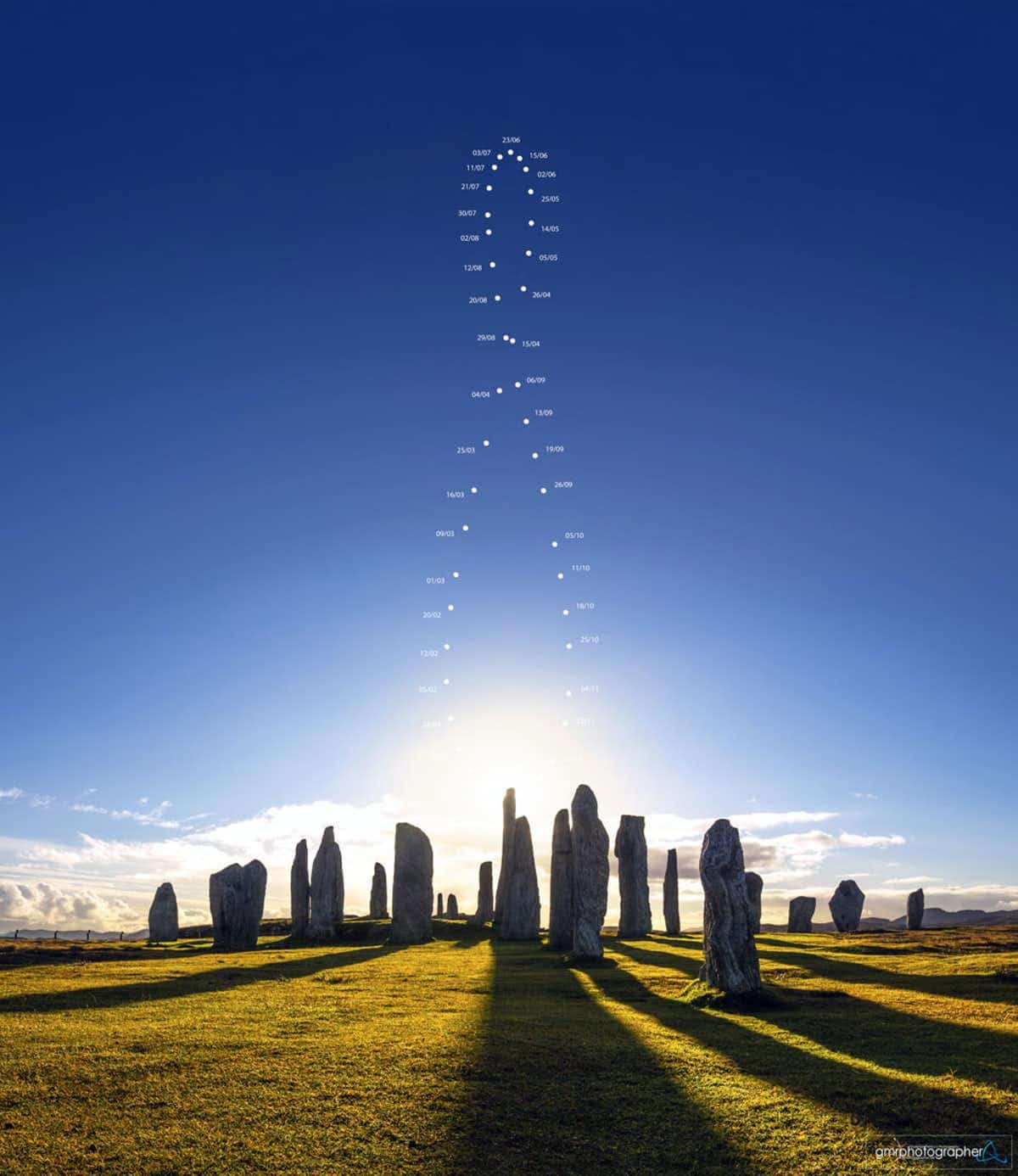 A photograph of the position of the Sun, taken at the same time on different days throughout the year, shows a figure-eight pattern known as an analemma. This photo was taken in Callanish, Scotland. Giuseppe Petricca / NASA

What Is ‘The Great Conjunction’? 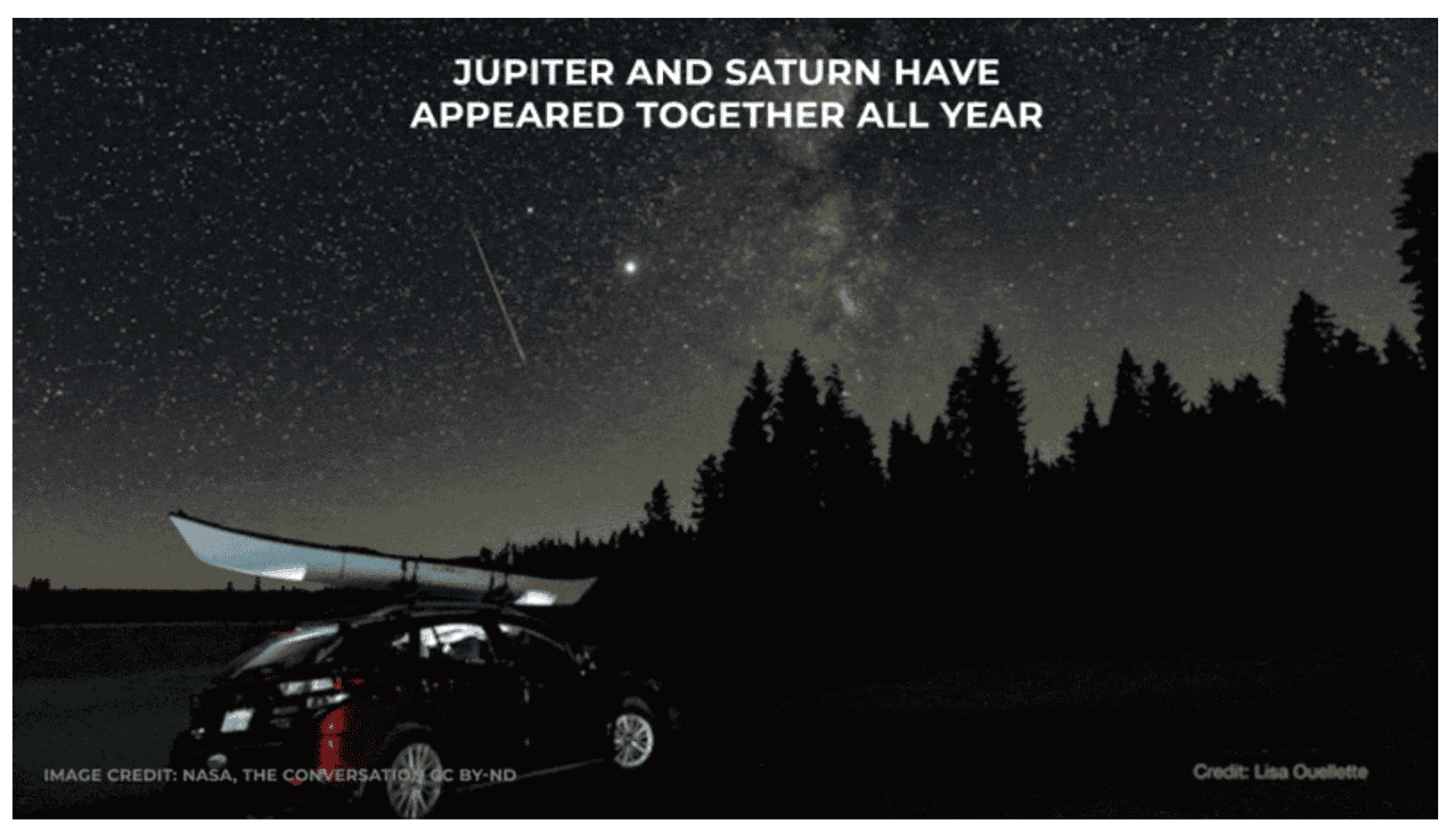 If you have a pair of binoculars, you’ll easily be able to spot both planets. In even a small telescope, you’d see both planets at the same time in the same field of view, which is really unheard of. That’s what makes this conjunction so rare. Jupiter and Saturn appear to meet up about every 20 years. Most of the time, however, they’re not nearly as close together as we’re going to see them on Monday, Dec. 21.

For a comparison, there was a great conjunction back in 2000, but the two planets were separated by about two full-Moon widths. This year, the orbits will bring them to where they appear to be about one-fifth of a full-Moon diameter. 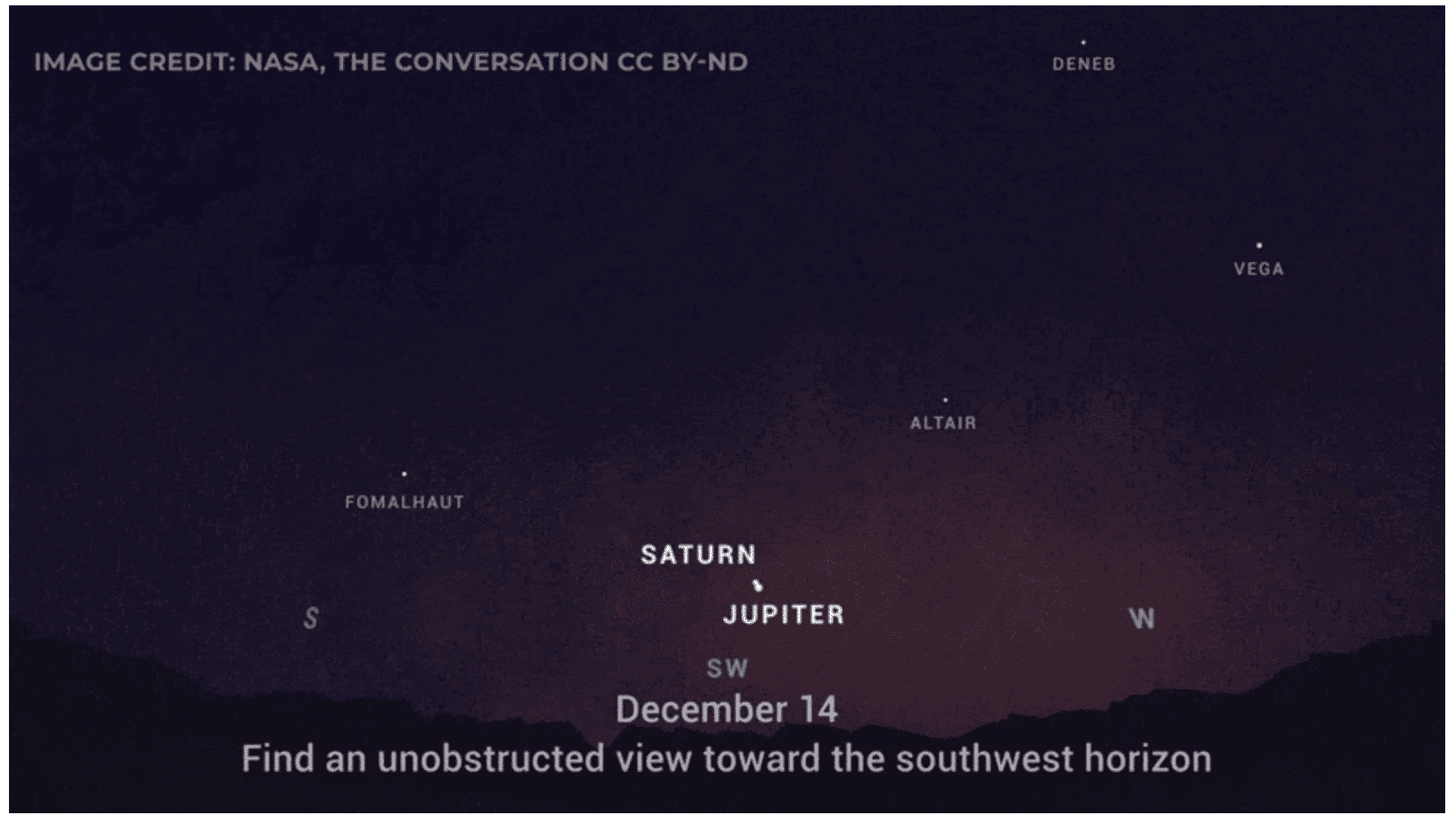 We have been encouraging folks to go out and look at these planets using just their eyes between now and Dec. 21. You’ll actually be able to see how much they appear to move over the course of a single day.

The next time they will get this close together in our sky won’t be for another 60 years, so this is going to be a once-in-a-lifetime event for many people. In fact, the last time they got this close together was in the year 1623, but it was really difficult, if not impossible, to see them then because they appeared much closer to the Sun and set soon after it. Go back another 400 years to 1226 and this would have been the last time that we would have had a good view of this type of conjunction.

What advice would you give to people who want to see the great conjunction?

If weather permits at Dyer Observatory, we’ll be streaming a live view of the conjunction from one of the observatory’s telescopes, and I’ll be available to answer questions. Even if you don’t have a telescope or a pair of binoculars, definitely go out and check out this very rare alignment with your own eyes. Remember that they set soon after sunset, so be ready to view right at dusk!

Disclosure statement: William Teets does not work for, consult, own shares in or receive funding from any company or organization that would benefit from this article, and has disclosed no relevant affiliations beyond their academic appointment.