Winning the Debate on Fracking 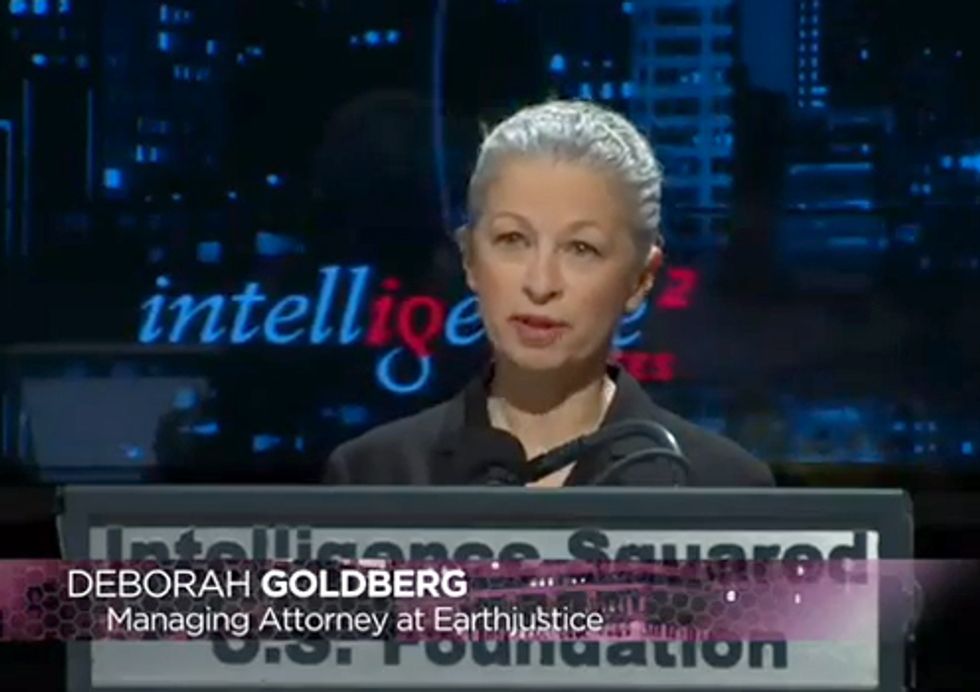 Earthjustice Attorney Deborah Goldberg came out victorious in a July 1 Intelligence Squared debate over whether the natural gas boom in America is doing more harm than good. Arguing against the super-intensive development of natural gas, she targeted the reckless, breakneck speed at which the industry is progressing.

Goldberg asked, “So, what characterizes a boom?" and answered her own question.

It's big. It's sudden. And it blows a lot of smoke. And the natural gas boom is doing all of that to an extreme. It's too much. It's too fast. And the hype is just over the top.

The boom is devastating the environment, wrecking communities and diverting the focus away from the much needed development of renewable energies, Goldberg said, adding:

There are hundreds of millions of dollars being spent to ensure that this industry can continue to operate without the science and without the protections we need. As a result, what we are hearing now is not how we're going to end our addiction to fossil fuels, but instead, a hundred years of gas.

Goldberg’s partner in the debate, Riverkeeper’s Watershed Program Director Kate Hudson, brought forward some strong points about the grim consequences of fracking: contamination of drinking water; exposure of communities living near fracking sites to serious pollutants; and the deceptive economic benefits of the gas boom, including some short-lived but extremely dangerous industry jobs.

Hudson argued for “trying to move towards a green economic future for our children, rather than having a fossil-fuel based industry come back.”

The pro-fracking side was presented by Joe Nocera, an op-ed columnist for The New York Times, and Sue Tierney, former assistant secretary for policy at the U.S. Department of Energy. They pushed the argument that natural gas is the “single best way to diminish coal production,” and tried to convince the audience that the natural gas boom is an enormous “gift” to Americans.

The two sides found some common ground on the issue of industry transparency and regulation: both agree that they must get better.

Goldberg criticized the industry for failing to publicly disclose the list of chemicals used in hydraulic fracturing:

We do know, as a result of lots of public pressure, that some of the chemicals that are used in this process are toxic, but there are many chemicals that have never even been tested as to their toxicity, and we have no clue what they're going to do to our health or environment, in the short or the long term.

An overwhelming majority of the audience spoke out against the industry’s secrecy and its reckless pace of development, and demanded a safer solution for addressing the nation’s energy needs. Both points set the groundwork for Goldberg’s closing statement:

We need to scale back, slow down and resist the boom mentality. We do not have to drill hundreds of thousands of wells just because we can. We have to ignore the advertising slogans on both sides and stop living in a fantasy world of endless fossil fuel consumption without consequences.

When the votes were cast, 58 percent of the audience believed that fracking does more harm than good, officially designating Deborah Goldberg and Kate Hudson as the debate’s winners. The audience said “no fracking way” to the impulsive, profit-driven and uncontrolled experiment of natural gas drilling.