Winds and Wildfires in California: 4 Factors to Watch That Increase Danger 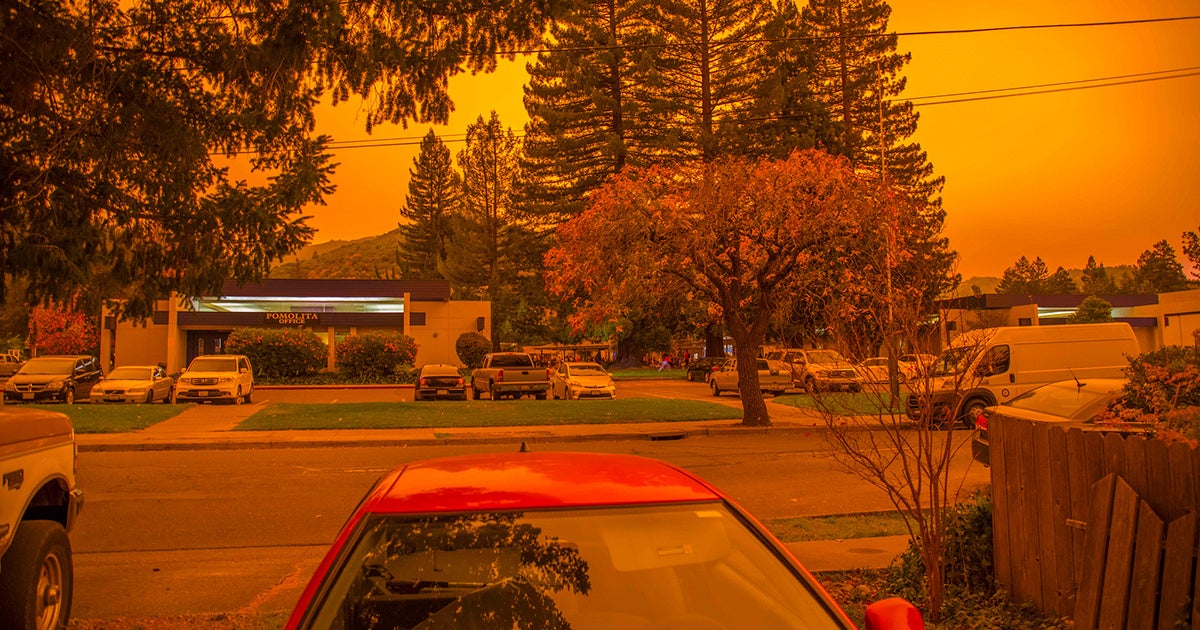 The first smoke from the Camp Fire arrived in Ukiah and turned the daylight red. Bob Dass / Flickr / CC BY 2.0

Before we dive into the science behind the four factors specific to the California Santa Ana winds, let’s review the current situation in California and wildfire disaster risks in general.

Scenes of fiery devastation are heartbreaking to see unfolding in the news and social media. In this moment, Nov. 15, there are a dozen active wildfires in California. Communities have been badly burned, some to the very foundations with scarcely a structure left standing. Thousands have evacuated, more than 60 people have lost their lives, some on foot, some trapped in fleeing cars; there are hundreds of people unaccounted for and family worried sick about them. Camp Fire is now the deadliest in California history.

Thousands of firefighters are battling to contain wildfires in the state. At this writing, the deadly Camp fire, near Chico in northern California, is now 141,000 acres and 40 percent contained with 9,700 residences and 290 commercial structures destroyed. In southern California, the Woolsey fire of Los Angeles and Ventura Counties, is now 98,362 acres with 62 percent contained, with 504 destroyed (estimate) and 96 damaged structures.

Let us briefly review wildfire disaster risks in general. First, wildfires can be ignited by natural causes such as lighting strikes or by various human activities at the wildland urban interface (WUI), such as when a lit cigarette is tossed or when electricity infrastructure fails. Power lines may be implicated in the tragic November 2018 Camp Fire. According California data from 2007 to 2016, around 5 percent of wildfire ignitions were from power lines and were around 11 percent of the acres burned. 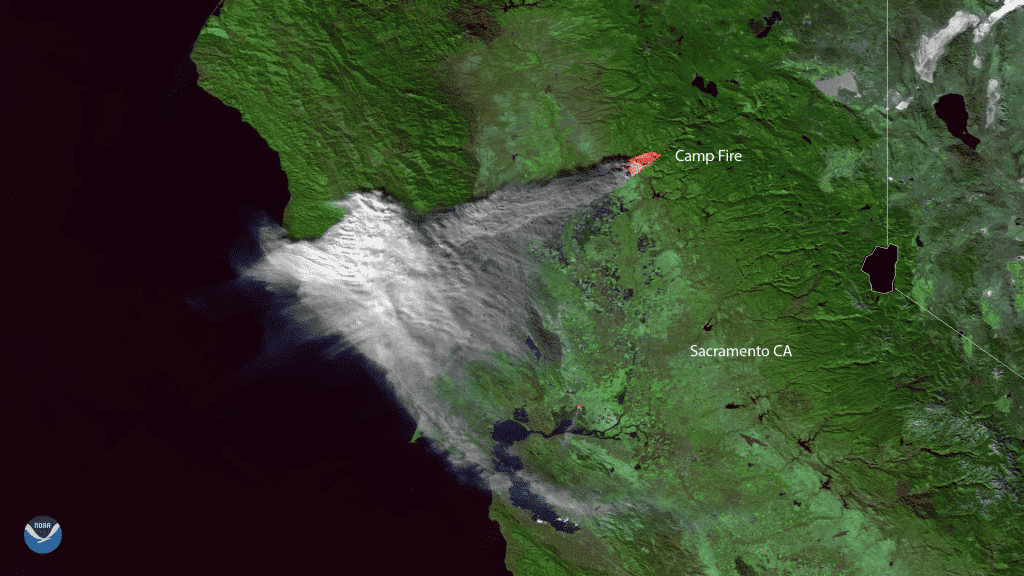 Fire suppression, which has cost the California Department of Forestry and Fire Protection (CAL FIRE) an estimated average of $554 million per year for the past five years, leaves more vegetation intact. In many places, more vegetation, also referred to as ‘fuel,’ is available to burn for the next fire.

Tragically, when wildfires encounter homes, schools and businesses it can become a dangerous situation. Not just the structures at the site of the fire are at risk. Smoke from wildfires can be lethal locally and a public health hazard when transported far downwind. Wildfire smoke can disproportionately increase health risks for children or those with heart disease or lung disease. Among the top 20 deadliest California wildfires from 1933 through November 2018, nearly a third were in 2017 and 2018. We can and must do better to protect lives from risks posed by dangerous wildfires.

Santa Ana winds in California, sometimes referred to as Diablo winds in the San Francisco Bay area downwind of Mount Diablo, can promote ignition and rapid spread of wildfires by drying vegetation and fanning the flames of fires once they are started. The Santa Ana winds dry out soils, trees and other vegetation much like a clothes dryer does a pair of jeans. Like an efficient dryer, Santa Ana winds increase both airflow and temperature to speed up evaporation of water. But instead of leaving behind freshly fluffed jeans, these winds suck out moisture and prime ecosystems to burn.

Santa Ana influenced fires, which occur between October and April, are different from the warm and dry season fires, that typically occur between June and September. Scientists have found the main reasons why Santa Ana influenced fires contribute the vast majority of cumulative economic losses in California compared to other wildfires that typically occur in the summer. From 1990-2009, Santa Ana influenced fires spread three times faster, occurred closer to urban areas, and burned into areas with greater housing values. Over the same years, other fires often occurred in higher elevation forests, were more sensitive to how old the vegetation was, lasted for extended periods, and accounted for 70 percent of total suppression costs. In other words, other fires burned in remote forests, often with plenty of mature vegetation or “fuel” for long-lasting wildfires. Whereas Santa Ana influenced fires scorched with greater speed through areas that were typically closer to more people.

Santa Ana winds have a name because they are naturally occurring seasonal winds that typically peak during the autumn. The season bridges the end of the typically hot and dry summer from the typically rainy winter season in California. California oscillates between wet years and dry years, with the prevalence of dry years outpacing the wet years. Drought years increase the risk of desiccated soils and parched vegetation that form ready fuel for wildfires. When these conditions occur simultaneously with Santa Ana winds, they can influence the severity of wildfires. Four factors influence the severity of winds during the autumn to winter season in California and are worth monitoring and providing timely and effective warnings for the public at risk.

During the autumn season, a typical weather pattern can set up that is favorable for the occurrence of Santa Ana winds. A high-pressure pattern predominates over western north America while a low -pressure pattern predominates over the Pacific Ocean. As a result, the predominant flow of air is from the interior basins, places like Nevada, to the Pacific Ocean. When this weather pattern sets up, pay close attention to local meteorological reports and fire warnings. This weather pattern is similar to turning on the clothes dryer. 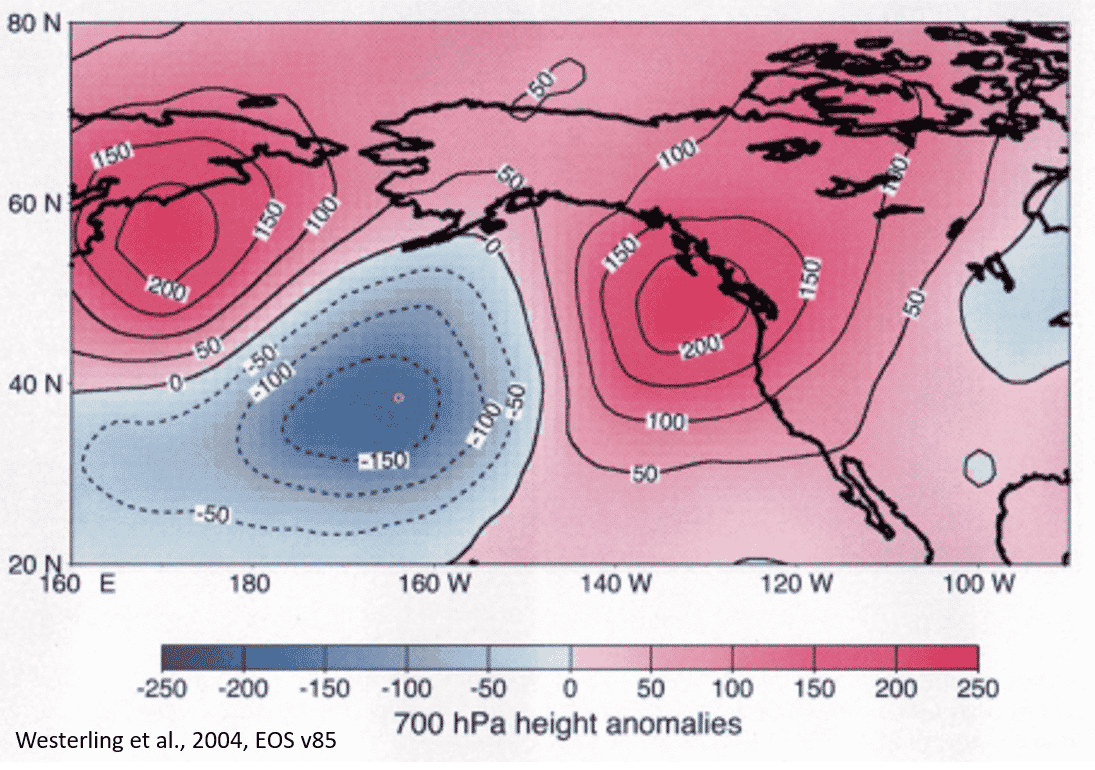 The air starts out at a cool temperature emanating from the autumn conditions of western U.S. The air encounters California mountain ranges and flows through the high elevation mountain passes and heads downslope. The air compresses both due to constriction of the air flowing through the narrow canyon as well as the higher atmospheric pressure at lower elevations (see figure). The molecules of the air parcel are now closer together, bump into each other, and have “higher kinetic energy.” Therefore as a parcel of air gets compressed, its temperature increases. This is similar to setting the clothes dryer temperature setting to warm or hot.

Factor 3: How Dry the Air is

Santa Ana winds become drier during their journey downslope. Why does this happen? An air parcel starting at a cool temperature contains a low amount of water vapor. If that same air parcel warms, such as described above, it can now hold more water vapor and therefore the relative humidity drops. Put another way, for the same amount of water vapor, the relative humidity is higher in cool air compared to warm air. Hence, the Santa Ana winds become drier and can increase water loss from vegetation that often is already quite dry during drought years or at the end of a summer season. This is like shifting the auto-dry level from less dry to more dry on a clothes dryer.

Factor 4: Speed of the Wind

Another consequence occurs when the air flowing through California coastal ranges is constricted through narrow mountain passes and flows down through the canyons. This constriction increases the wind speed above the initial wind speed before passing through the narrow mountain topography. Similar to shifting the cycle from “delicate” to “heavy duty” on a clothes dryer. Santa Ana winds have speeds of 40-60 kilometers/hour (25-37 miles/hour) or in extreme cases more than 100 km/hr (62 mi/hr). It can be extremely difficult to outrun such winds or drive away along canyon roads with neighbors who may be fleeing at the same time. Such winds can help fires grow rapidly, spread quickly and become deadly.

Santa Ana Winds are a natural seasonal occurrence. Scientists are studying the consequences of climate change and how warmer background conditions interact with the four factors described above. The findings have the potential to better inform advanced warnings for populations and first responders confronting the risks of Santa Ana wind influenced wildfires.